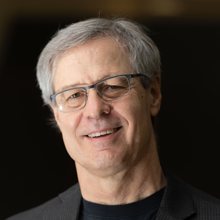 Professor, School of Chemistry and Biochemistry, Director, Center for the Origin of Life

We study folding and structure of RNA and DNA as modulated by sequence, covalent damage, anti-cancer drugs, proteins, other nucleic acid molecules. The oldest assembly in biology is the ribosome, which is a primary focus of our efforts. Ancient ribosomal structure and function, from beyond the root of the tree of life, can be inferred from extant structure/function combined with phylogeny, evolutionary theory, biophysical chemistry, bioinformatics and molecular biology. We use all of these approaches to construct models of ancient ribosomes, which we then study by biochemical methods. Three-dimensional structure, being more conserved over evolutionary time than sequence, offers some of the most important guideposts in our journeys down the base of the tree of life.

Center for the Origin of Life (COOL) »

Pyruvate, the deprotonated form of pyruvic acid, serves as an intermediate for both aerobic and anaerobic metabolism and has been proposed to be a promising prebiotic molecule initializing primitive metabolism. This talk will focus on some recent studies of the chemistry and photochemistry of pyruvate, as well as its protonated form, on oxide surfaces (SiO2, Al2O3 and TiO2) and in high ionic strength aqueous environments relevant to sea spray and the sea surface microlayer. Most interesting is the formation of several new compounds detected with mass spectrometry following extraction from two of the oxide surfaces – Al2O3 and TiO2. These compounds include zymonic acid, which is found to be present under both dark and light conditions, and other higher molar mass oligomeric species such as parapyruvic acid, acetolactic acid, and 2,4-dihydroxy-2-methyl-5-oxohexanoic acid (DMOHA) that form only under irradiation. Although this study shows that there are some parallels between aqueous phase photochemistry of pyruvic acid and the photochemistry of adsorbed pyruvic acid in terms of the products that form, there are also distinct differences with several other new photoproducts observed on these two reactive oxide surfaces including lactic acid dimers and trimers as well as a significant amount of even larger oligomeric species not seen in the aqueous phase chemistry. Because of the role of pyruvic acid, the simplest of the alpha-keto acids, in the atmosphere and in metabolic pathways, these results have implications to the chemistry that occurs in both indoor and outdoor environments and during prebiotic Earth conditions.