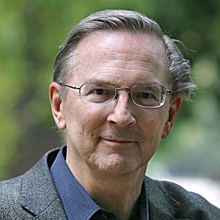 The Emergence of RNA from Prebiotic Chemistry

We are interested in the chemical and physical processes that facilitated the transition from chemical evolution to biological evolution on the early earth. As a way of exploring these processes, our laboratory is trying to build a synthetic cellular system that undergoes Darwinian evolution. Our view of what such a chemical system would look like centers on a model of a primitive cell, or protocell, that consists of two main components: a self-replicating genetic polymer and a self-replicating membrane boundary. The job of the genetic polymer is to carry information in a way that allows for both replication and variation, so that new sequences that encode useful functions can be inherited and can further evolve. The role of the protocell membrane is to keep these informational polymers localized, so that the functions they encode lead to an advantage in terms of their own replication or survival. Such a system should, given time and the right environment, begin to evolve in a Darwinian fashion, potentially leading to the spontaneous emergence of genomically encoded catalysts and structural molecules.

We hope that our explorations of the chemistry and physics behind the emergence of Darwinian evolution will lead to explanations for some of the universal properties of modern cells, as well as explanations of how modern cells arose from their simpler ancestors. As we explore these fundamental questions we are also on the lookout for chemical or physical phenomena that might have practical utility in biomedical research.

The first genetic polymer may have been a version of RNA with significant heterogeneity in its backbone structure along with variations in the chemistry of its nucleobases and sugar components. I will describe our ongoing efforts to explore the properties of potentially prebiotic versions of RNA, with particular emphasis on the effects of such variations on the process of nonenzymatic RNA replication.  Our findings suggest a model for the transition from early heterogeneous RNA to a more homogeneous form that is closer to modern RNA.