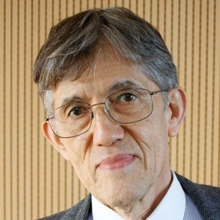 The RNA World: Insights from the RNA Virosphere

Antonio Lazcano Araujo, professor of UNAM's School of Sciences, was selected for a 2009-2010 UC MEXUS-CONACYT Visiting Scholar fellowship at the Scripps Institution of Oceanography at UC San Diego. During his six-month stay at the laboratory of Professor Jeffrey Bada, Lazcano Araujo conducted research on the chemical synthesis of organic compounds under primitive Earth conditions, as part of an ongoing project to understand prebiotic evolution and the conditions leading to the origin of life on our planet. Seeking to close the gap between prebiotic organic syntheses and the initial stages of biological evolution, he also critically analyzed models of the development of metabolic pathways in early diverging microbes using available genomic databases. Lazcano Araujo also contributed "The Origin and Early Evolution of Life: Did It All Start in Darwin's Warm Little Pond?" to Evolution Since Darwin and published "Historical Development of Origins Research" in Cold Spring Harbor Perspectives in Biology: The Origins of Life. Additional outcomes of this stay included a paper on the risks posed by U.S. creationist groups to Mexican science education as well as the manuscript of the book La Tumba de Darwin.

There are many definitions of the RNA World, including several contradictory ones. One could say that it is an early, perhaps primordial, stage during which RNA and ribonucleotides played a much more conspicuous role in heredity and metabolism. Even if this possibility is not accepted, the origin and the manifold roles of RNA in extant biology need to be addressed. Nowadays viroids and RNA viruses are the only known biological entities that do not employ DNA as a genetic polymer. Although it is unlikely that they are direct descendants of primitive RNA-based life forms, evolutionary analyses of RNA viral replication strategies, genome sizes and organization, mutation rates and gene accretion processes may provide significant insights into structure and evolution of early cellular genomes prior to the emergence of DNA genomes.