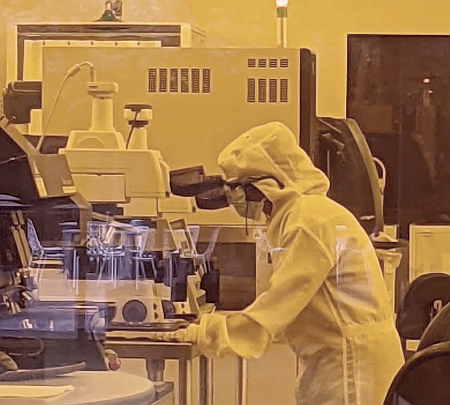 With holiday shopping deadlines looming, consumers cannot escape the impact of the global microelectronic chip shortage. From daily news reports about manufacturers unable to complete orders due to the lack of chips, to “out of stock” messages across websites on popular electronics items, one of the impacts of COVID was to lay bare the massive importance of the microelectronic chip in daily modern life, and how a single-location centered manufacturing nexus can upend the consumer market on a massive scale. The combination of these real-world impacts on supply chains, as well as the need to localize semiconductor and chip manufacturing gave Congress the impetus to pass the “Creating Helpful Incentives to Produce Semiconductors for America Act (CHIPS)”. CHIPS seeks to increase investments and incentives to support U.S. semiconductor manufacturing, research and development, and supply chain security.

The School of Electrical and Computer Engineering research teams of Assistant Professor Asif Khan, partnering with Dan Fielder Professor Muhannad Bakir, and Associate Professor Shimeng Yu, partnering with Professor Sung-Kyu Lim and Assistant Professor Shaolan Li, have dominated the 2021 IEDM presentation line-up with a total of 8 accepted papers. With topics ranging from ferroelectric materials for memory, new advances in ALD process, and in-memory computing and 3D reconfigurable architectures, the research presented by these teams is at the cutting-edge of advancing computing power and consumer electronics. In addition to the research presentations, Electrical and Computing Engineering Faculty & Director of the 3D Systems Packaging Research Center at GT will be presenting a short course session on devoted to “Heterogenous Integration Using Chiplets & Advanced Packaging”

Noting the timely nature of these research advancements, Arijit Raychowdhory; Professor and Steve W. Chaddick School Chair in Electrical and Computer Engineering noted, “IEDM is a premier conference in the area of semiconductor devices. Such a strong performance by GT ECE exemplifies the strength of our program, the ingenuity of our students and the innovation driven by our world-class faculty. Sincere congratulations to Professors Khan, Yu Bakir, Lim and Li for their pioneering research in semiconductor logic and memory technologies, that are critical for our nation and our industries.”

Asif Khan is an assistant professor in the School of Electrical and Computer Engineering at the Georgia Tech. He received his Ph.D. in electrical engineering and computer sciences from the University of California, Berkeley in 2015. His work led to the first experimental proof-of-concept demonstration of the negative capacitance effect in ferroelectric oxides. His group at Georgia Tech conceptualizes and fabricates electronic devices that leverage interesting physics and novel phenomena in emerging materials (such as ferroelectrics, antiferroelectrics and strongly correlated systems) to overcome the “fundamental” limits in computation and to address the most pressing challenges in electronics and the semiconductor industry.

Shimeng Yu is currently an associate professor in the School of Electrical and Computer Engineering at the Georgia Tech. He received the B.S. degree in microelectronics from Peking University in 2009, and the M.S. degree and Ph.D. degree in electrical engineering from Stanford University in 2011 and 2013, respectively. From 2013 to 2018, he was an assistant professor at Arizona State University. Prof. Yu’s research interests are the semiconductor devices and integrated circuits for energy-efficient computing systems. His research expertise is on the emerging non-volatile memories for applications such as deep learning accelerator, in-memory computing, 3D integration, and hardware security.

Muhannad S. Bakir is the Dan Fielder Professor in the School of Electrical and Computer Engineering at Georgia Tech.  Dr. Bakir and his research group have received more than thirty paper and presentation awards including six from the IEEE Electronic Components and Technology Conference (ECTC), four from the IEEE International Interconnect Technology Conference (IITC), one from the IEEE Custom Integrated Circuits Conference (CICC), and two from the IEEE Transactions on Components Packaging and Manufacturing Technology (TCPMT). Muhannad S. Bakir received the B.E.E. degree from Auburn University, Auburn, AL, in 1999 and the M.S. and Ph.D. degrees in electrical and computer engineering from the Georgia Tech in 2000 and 2003, respectively. His research interests include, heterogeneous microsystem design and integration, including 2.5D and 3D ICs and packaging, electrical and photonic interconnects, and embedded cooling technologies.

Sung Kyu Lim received B.S. (1994), M.S. (1997), and Ph.D. (2000) degrees all from the Computer Science Department at UCLA. During 2000-2001, he was a post-doctoral scholar at UCLA, and a senior engineer at Aplus Design Technologies, Inc. Lim joined the School of Electrical and Computer Engineering at Georgia Institute of Technology an assistant professor. He is currently the director of the GTCAD (Georgia Tech Computer Aided Design) Laboratory and focuses on VLSI and 3D circuit architecture and packaging.

Shaolan Li received his B.Eng. degree with highest honor from the Hong Kong University of Science and Technology (HKUST) in 2012, and his Ph.D. from UT Austin in 2018, all in electrical engineering. Prior joining Georgia Tech as an assistant professor in 2019, he was a post-doctoral fellow in the Department of Electrical and Computer Engineering at UT Austin from 2018-2019. He also held intern positions in Broadcom Ltd. in Sunnyvale, California, and NXP in Tempe, Arizona during 2013-2014. His research interests are broadly in analog, mixed-signal, and RF integrated circuits. His expertise is in high-performance data converters, ultra-low-power low-cost sensor interface, and novel analog mixed-signal architectures for design automation.

The IEEE International Electron Devices Meeting (IEDM) is the world’s preeminent forum for reporting technological breakthroughs in the areas of semiconductor and electronic device technology, design, manufacturing, physics, and modeling. IEDM is the flagship conference for nanometer-scale CMOS transistor technology, advanced memory, displays, sensors, MEMS devices, novel quantum and nano-scale devices and phenomenology, optoelectronics, devices for power and energy harvesting, high-speed devices, as well as process technology and device modeling and simulation. Georgia Tech research teams have a strong track of record in IEDM publications in the recent years, including 8, 4, 9 and 7 papers presented in IEDM 2018, 2019, 2020 and 2021, respectively. 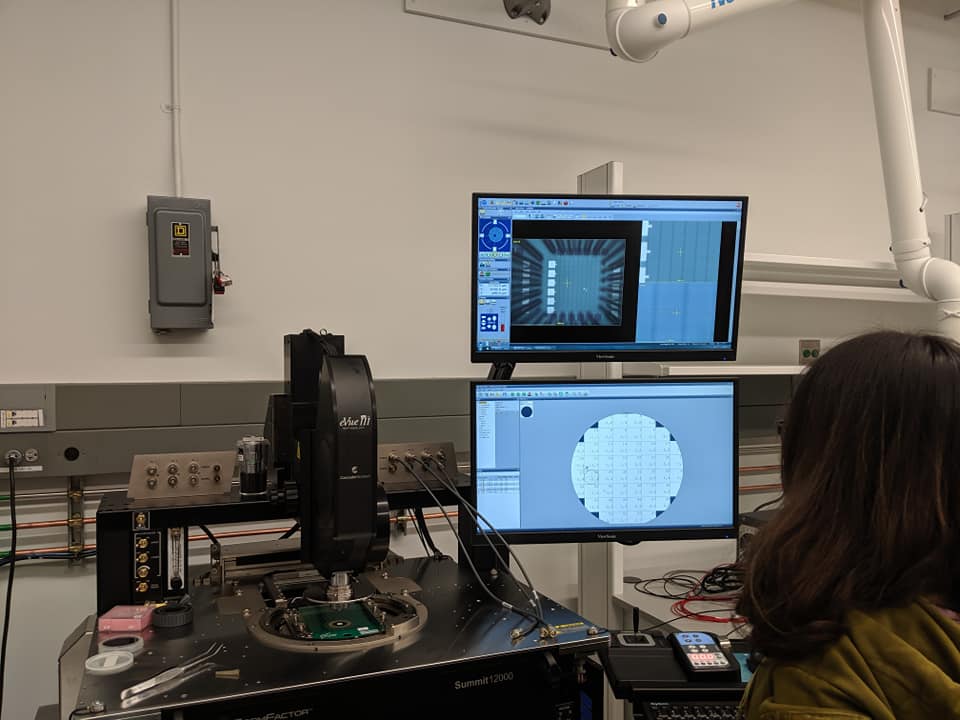 Student of Shimeng Yu at a probe station in the Yu Lab.