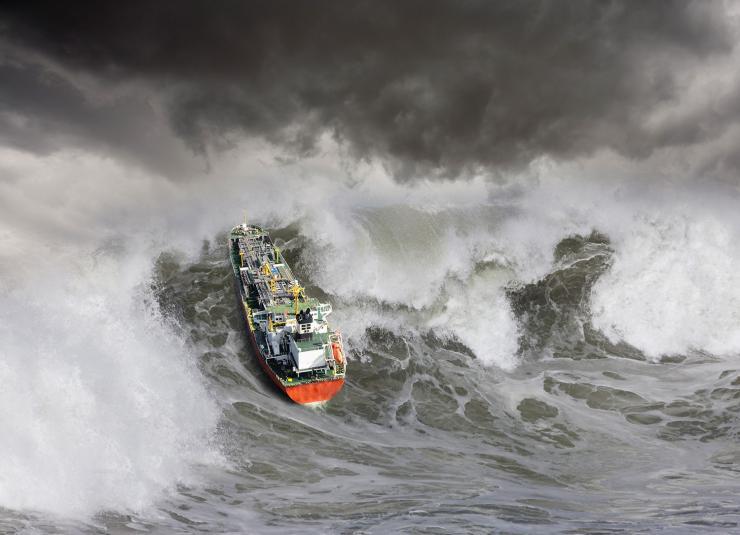 The eastern Mediterranean Sea, a large basin surrounded by ancient cultural sites, is also a climatology hot spot. However, the region has received comparatively little attention when it comes to understanding the extreme sea states that produce massive and potentially catastrophic waves.

Recognizing a gap in scientific knowledge, an international team of researchers led by Francesco Fedele, associate professor in the School of Civil and Environmental Engineering at Georgia Tech, investigated potential hazards for ship navigation in the eastern Mediterranean. They looked at rogue waves, examined how they form, and analyzed the likelihood that a ship would encounter them while navigating the rough waters of intense storms. Their findings illuminate the nature of extreme waves in the Mediterranean Sea and could advance technology for rogue wave predictions and maritime navigation in extreme weather conditions.

“Imagine that at a single point in the ocean, waves are coming from many directions,” Fedele said. “There is always a chance they will meet, pile up in amplitude, and create an enormous wave. This is what we call a rogue event.”

Rogue waves have long been observed in the western Mediterranean by eyewitnesses — sometimes travelers on cruise ships — and have been known to cause structural damage and loss of lives. To examine the case of the eastern Mediterranean, Fedele teamed up with collaborators at the Technion-Israel Institute of Technology and the CAMERI Coastal and Marine Engineering Research Institute in Haifa, Israel. The team employed a novel theory of space-time wave extremes and considered the hypothetical scenarios of Israeli naval fleet ships navigating the waters of two major storms that occurred in the Mediterranean Sea in 2017 and 2018.

The researchers studied the frequency of rogue wave occurrences as encountered by an observer at a given point on the sea’s surface, such as an oil rig. The team’s statistical analysis indicated that the largest observed waves during the two major storms have similar characteristics to the catastrophic El Faro, Andrea, and Draupner rogue waves, in which the asymmetry of the waves’ crests and troughs was the dominant factor in creating rogue waves.

They discovered that, because the eastern Mediterranean basin is characterized by waves coming from all directions, rogue waves do not “steal” energy from neighboring waves or grow at their expense. This effect, known as modulational instability, has been employed in the past to understand rogue waves. But, according to Fedele, it is only relevant when waves travel in the same direction, like through a long channel, and therefore does not apply in realistic seas.

The team’s novel space-time analysis of the most intense sea states also demonstrated the ability to predict potential rogue hazards for ships of various sizes and cruise speeds navigating within the rough waters of the analyzed storms.

Fedele says a surfer can offer a useful analogy for the space-time effect of waves.

“As we know, surfers do not wait all day at the same spot, hoping a large wave will arrive,” he said. “They swim around an area to increase their chances of encountering large waves, and they always find one. Similarly, a ship navigating waves will encounter more waves along its path, and the likelihood of coming across a rogue wave is higher than it would be for an oil rig.”

The team’s novel analysis of waves in space-time can also predict the potential of rogue hazards for ship navigation. A version of Fedele’s model has already been adopted by the National Oceanic and Atmospheric Administration for WAVEWATCH III, the national operational wave forecast model. According to Fedele, such a model can be expanded to account for ship motion and rogue hazards, and has the potential to benefit shipping companies, maritime industries, and coastal communities.

The Georgia Institute of Technology, or Georgia Tech, is one of the top public research universities in the U.S., developing leaders who advance technology and improve the human condition.

The Institute offers business, computing, design, engineering, liberal arts, and sciences degrees. Its more than 46,000 students, representing 50 states and more than 150 countries, study at the main campus in Atlanta, at campuses in France and China, and through distance and online learning.