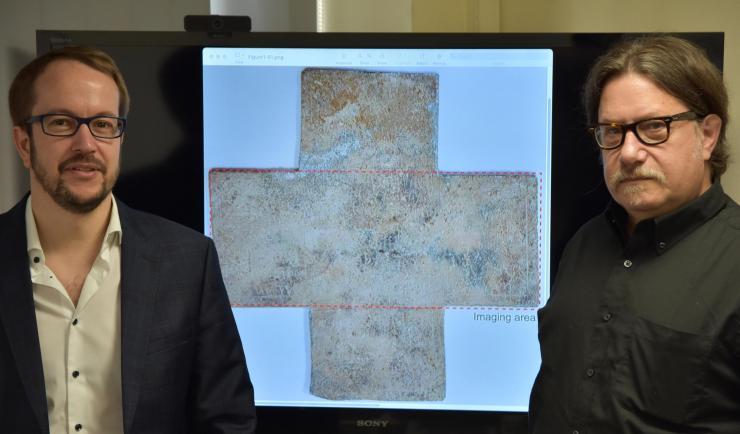 In a multidisciplinary project, researchers at the Georgia Institute of Technology and Georgia Tech-Lorraine used terahertz imaging and signal processing techniques to look beneath the corroded surface of a 16th-century lead funerary cross. Led by David Citrin, a professor in the School of Electrical and Computer Engineering (ECE), the effort brought together imaging scientists, a chemist specializing in archaeological objects, and an art historian to reveal a message that had been obscured by time: an inscription of the Lord’s Prayer.

“Our approach enabled us to read a text that was hidden beneath corrosion, perhaps for hundreds of years,” said Alexandre Locquet, an adjunct professor in ECE and researcher at Georgia Tech-CNRS IRL 2958, a joint international research laboratory at the Georgia Tech-Lorraine campus in Metz, France. “Clearly, approaches that access such information without damaging the object are of great interest to archaeologists.”

The study was reported March 2 in the journal Scientific Reports.

The cross, cut from a sheet of lead, was found in a burial plot at an abbey in Remiremont, France — a couple hours drive from the Georgia Tech-Lorraine campus. Known as a croix d’absolution, it is a type of funerary cross that dates to the Middle Ages and has been found at sites in France, Germany, and England.

“This type of cross typically bears inscriptions of prayers or information about the deceased,” said Aurélien Vacheret, director of the Musée Charles-de-Bruyères in Remiremont and co-author on the study. “It is thought their purpose was to seek a person’s absolution from sin, facilitating their passage to heaven.”

The museum loaned the cross to Citrin’s lab in hopes that the team could use imaging techniques to make the invisible visible. Citrin and his group specialize in non-destructive evaluation and develop techniques that allow for detailed examination of an object’s hidden layers without changing or damaging its original form. Although their work often has industrial applications, such as detecting damage to airplane fuselages, the group embraced the opportunity to inspect the cross – a chance to further explore their technology’s applications for archaeological purposes.

Peeking Beneath the Veil of Corrosion

The team used a commercial terahertz scanner to examine the cross every 500 microns (about every half a millimeter) across the object. First, the scanner sent short pulses of terahertz electromagnetic radiation — a form of light that travels on tiny wavelengths — over each section of the cross. Some waves bounced back from the layer of corrosion, while others penetrated through the corrosion, reflecting from the actual surface of the lead cross. This produced two distinct echoes of the same original pulse.

Next, the team used an algorithm to process the time delay between the two echoes into a signal with two peaks. This data revealed how thick the corrosion was in each scanned point. The measurements of the light beams that reflected from the underlying metal were then collected to form images of the lead surface below the corrosion.

Although crucial data was gathered during the scanning process, the raw images were too noisy and jumbled and the inscription remained illegible at the time. But Junliang Dong, then a Ph.D. student in Citrin’s lab, had the insight to process the images in a special way to eliminate the noise. By subtracting and piecing together parts of the images acquired in different frequencies, Dong was able to restore and enhance the images. What was left was a surprisingly readable image containing the text.

Using the processed images, Vacheret was able to identify multiple Latin words and phrases. He determined they were all part of the Pater Noster, commonly known as the Our Father or the Lord’s Prayer.

The team also worked with a conservationist to chemically reverse the corrosion on the cross, confirming the Pater Noster inscription. Comparing their images to the clean cross, the team found their images had revealed parts of the inscription not observable on the original cross. By uncovering additional aspects of the inscriptions that were previously undocumented, their work was able to offer deeper understanding of the cross and further insight into 16th-century Christianity in Lorraine, France.

“In this case, we were able to check our work afterwards, but not all lead objects can be treated this way,” Citrin said. “Some objects are large, some must remain in situ, and some are just too delicate. We hope our work opens up the study of other lead objects that might also yield secrets lying underneath corrosion.”

The cross project illustrates that success requires more than just accurate measurement, but also careful data processing and collaboration between researchers from disparate fields. The team’s approach opens new perspectives for terahertz imaging analysis and could produce great boosts for the fields of digital acquisitions and documentation, as well as character recognition, extraction, and classification.

“Despite three decades of intense development, terahertz imaging is still a rapidly developing field,” said Locquet. “While others focus on developing the hardware, our efforts concentrate on making the most of the data that is measured.”

Funding: This work was funded by the Fonds Européen de Développement Régional (FEDER) from the Conseil Régional du Grand Est, as well as the Institut Carnot ARTS. 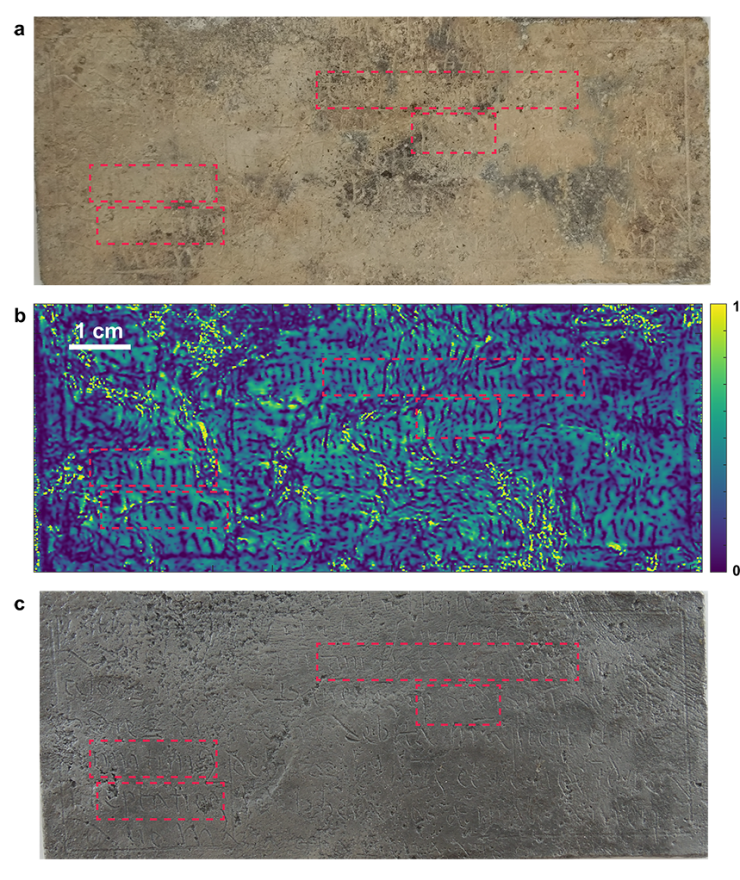