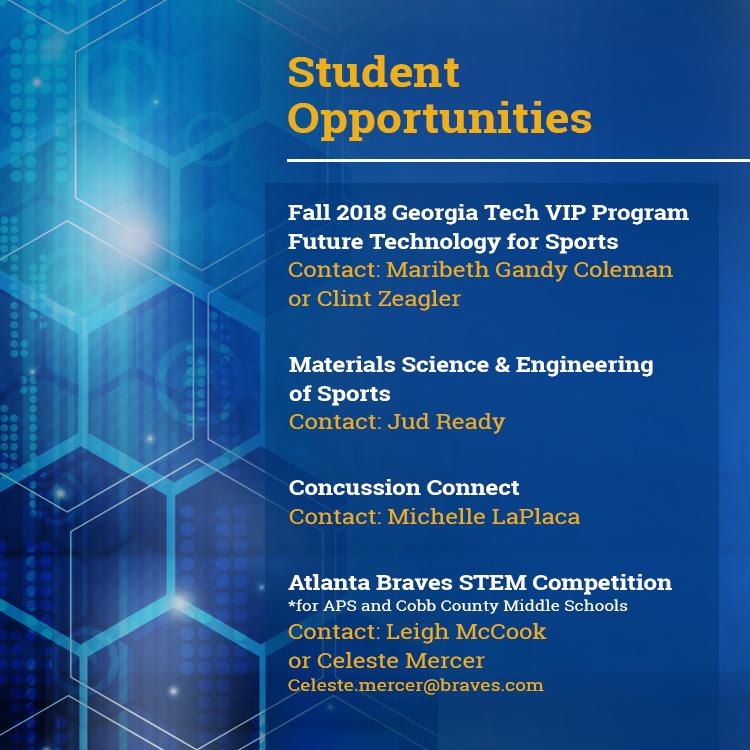 “Our vision is to establish Atlanta as the world leader in sports technology and innovation.”

It’s a lofty goal, for sure, but Doug Allvine is determined to achieve it. As Georgia Tech’s assistant athletics director for innovation, it’s his job to bring together athletics, researchers, and industry. He’s been in the newly-created position for about a year and is concentrating on three areas—sports performance, fan experience, and operations. Allvine and the Georgia Tech Athletic Association are also spearheading the creation of the Center for Sports Innovation, which focuses on entrepreneurship innovation.

“We want to create an entity that brings together Georgia Tech first and then brings together what makes Atlanta so special, which is all these pro teams within a stone's throw.”

The center is working with other units on campus, including the Institute for People and Technology, the College of Computing, and the Office of Industry Collaboration. It’s all about bridging the gap.

“Georgia Tech is unique because we're situated in Atlanta and situated next to a vibrant and growing entrepreneurial ecosystem, and that's where the differential advantages for Georgia Tech athletics come from,” said Bill Cutts, senior director, Georgia Tech Office of Industry Collaboration.

It’s the same idea that’s behind innovation neighborhoods like Tech Square in Midtown Atlanta that attract not only entrepreneurs but also large companies.

“This isn't just an idea out of left field that doesn't fit in. It's an idea that walks in and suddenly fits in with what we've been trying to do.”

Students and student-athletes are also critical to this strategy. “We want to give them opportunities to be involved in sports innovation, whether it’s from a testbed standpoint or a research standpoint and make them have a greater awareness of some of these ecosystems that we have in place, whether it’s Create-X or ATDC. There are so many different programs that we have here,” said Allvine.

As a former student-athlete, and now a researcher, Omer Inan has unique insight into the physical challenges that athletes face and how technology can address them. The All-American collegiate discus thrower joined Georgia Tech in 2013 as an assistant professor in the School of Electrical and Computer Engineering (ECE).

“I had this interest and passion for allowing people to get better information about their health and possibly their performance—from an athletic standpoint—outside of clinical and lab settings,” said Inan.

He had an idea to use his background in audio engineering to develop a knee brace that measures the popping and cracking sounds inside joints. Sensors are attached to the skin, while two types of miniature microphones detect sound. One catches soundwaves in the air, and the other senses vibrations on the skin’s surface in response to acoustic energy inside the body.

Thanks to funding from DARPA’S Warrior Web program to develop wearable technologies for soldier rehabilitation, and the Smart and Connected Health program from NSF and NIH, Inan along with collaborators in ECE and the College of Sciences are building better, less expensive microphones and sensors. They’re also examining what the sounds mean for determining if joints need further rehabilitation.

“For example, if we inject saline into the knee capsule to mimic swelling, how does that impact the sounds?” explained Inan. His team is conducting cadaver studies, including performing small meniscal tears, which simulate one of the most common knee injuries in athletes.

Inan recently expanded his research to study more complex joints—elbows and shoulders—and is working with the Georgia Tech baseball team to take measurements from pitchers and infielders throughout the season. His team is trying to determine markers of joint overuse that could be used to predict the risk of overuse injury.

More broadly, this research could also impact people living with arthritis or those who are just trying to stay active. “Maybe we're recreational tennis players, or maybe we go for a jog, and we want to understand if we should back off that day. I think that having in-depth physiological information about joint health with non-invasive sensors would be a huge win.”

A bump or blow to the head that rattles the brain and disturbs normal function is known as traumatic brain injury, or TBI. It’s a complicated injury, with a wide range of symptoms from a headache to memory loss and even seizures. In athletics, from youth to professional, mild concussion is the most frequent type of traumatic brain injury.

At the college level, the NCAA and the U.S. Department of Defense have embarked on the largest-ever study of concussion in sports with the goal of better understanding and preventing these injuries. Preliminary data from the CARE Consortium study, released in January, indicates that attitudes about concussion among student-athletes, medical providers, and athletic programs have changed over the past 17 years. Campuses are emphasizing adequate recovery time, which could result in fewer repeat concussions.

In 2016, Georgia Tech President G.P. “Bud” Peterson became chair of the NCAA Board of Governors, the NCAA’s highest governing authority. Last April, the board increased its emphasis on the importance of safeguarding student-athlete health and safety by endorsing nine areas that the NCAA’s Sport Science Institute has identified as priorities, including concussion, cardiac health, and mental health.

“The NCAA has established the health and safety of its athletes as one of the Association’s top priorities,” said Georgia Tech President G.P. “Bud” Peterson. “We’re already learning a great deal from the concussion study launched by the NCAA and the U.S. Department of Defense in 2014. In addition, we’re addressing other areas that impact health, well-being, academic and athletic performance. The NCAA is taking a holistic approach. It reminds me of the way we bring together expertise in multiple disciplines at Georgia Tech. Our internal and external collaborations many times result in breakthroughs that wouldn’t have been discovered otherwise.”

Dr. Peterson has invited the NCAA’s first chief medical officer, Dr. Brian Hainline, to visit Georgia Tech in the fall to explore collaborations between Georgia Tech, the Centers for Disease Control and Prevention, and Children’s Healthcare of Atlanta in the area of concussion research.

Michelle LaPlaca, associate professor in Georgia Tech’s and Emory's Department of Biomedical Engineering, has been researching TBI for more than 20 years. She says whether the injury is mild or severe, it’s difficult to figure out what's going on in the brain and how that contributes to function. Researchers study TBI in several ways: at the cellular level by mechanically injuring cells and observing how they break down; they also use computer-generated simulations and animal models. There’s always one thing missing, though: how to connect all these levels of research to human TBI.

“You can’t directly measure what happens in the brain of a human during a traumatic brain injury,” said LaPlaca. She calls TBI “a heterogeneous injury.” It manifests itself in different ways—memory problems in one person, a headache in another. Doctors consider underlying health issues, and gender, too. Then there’s the nature of the injury itself. Was the athlete hit from the front or the back? Were they wearing a helmet? LaPlaca examines all of these variables and how they contribute to the brain injury.

“Part of the motivation is to better understand those tolerances so that we can design better protective gear. Protective gear like helmets are designed to guard against skull fractures, but can't prevent movement of the brain within the skull.”

She also says there’s a need for more tools that can quickly and objectively assess concussion. LaPlaca and David Wright of Emory University have developed DETECT or Display Enhanced Testing for Cognitive Impairment and Mild Traumatic Brain Injury. After a suspected concussion, an athlete puts on a head-mounted display and earphones, which reduces outside distraction and creates a more immersive test-taking experience. Using a controller, they take a shortened neuropsychological test measuring memory and reaction time, as well as balance and eye movement. By covering multiple neurological domains, DETECT can better guide clinical management of the concussion. The assessment results also take into account off-the-field factors like learning disabilities and medications.

Georgia Tech researchers have tested DETECT with high school and college football players and find that it is accurate in distinguishing concussed players from those without a head injury. LaPlaca emphasizes, though, that DETECT is meant to enhance the knowledge and expertise of athletic trainers, not replace it.

“[Athletic trainers] have a lot of experience, and we don't want to dismiss that,” she said. “We want to figure out a way to integrate the human experience into our algorithms for decision making.”

She says although academics and athletics don't typically work together, “there’s a lot of willingness on both sides” to work together to advance innovative ideas that benefit athletes on and off the field. 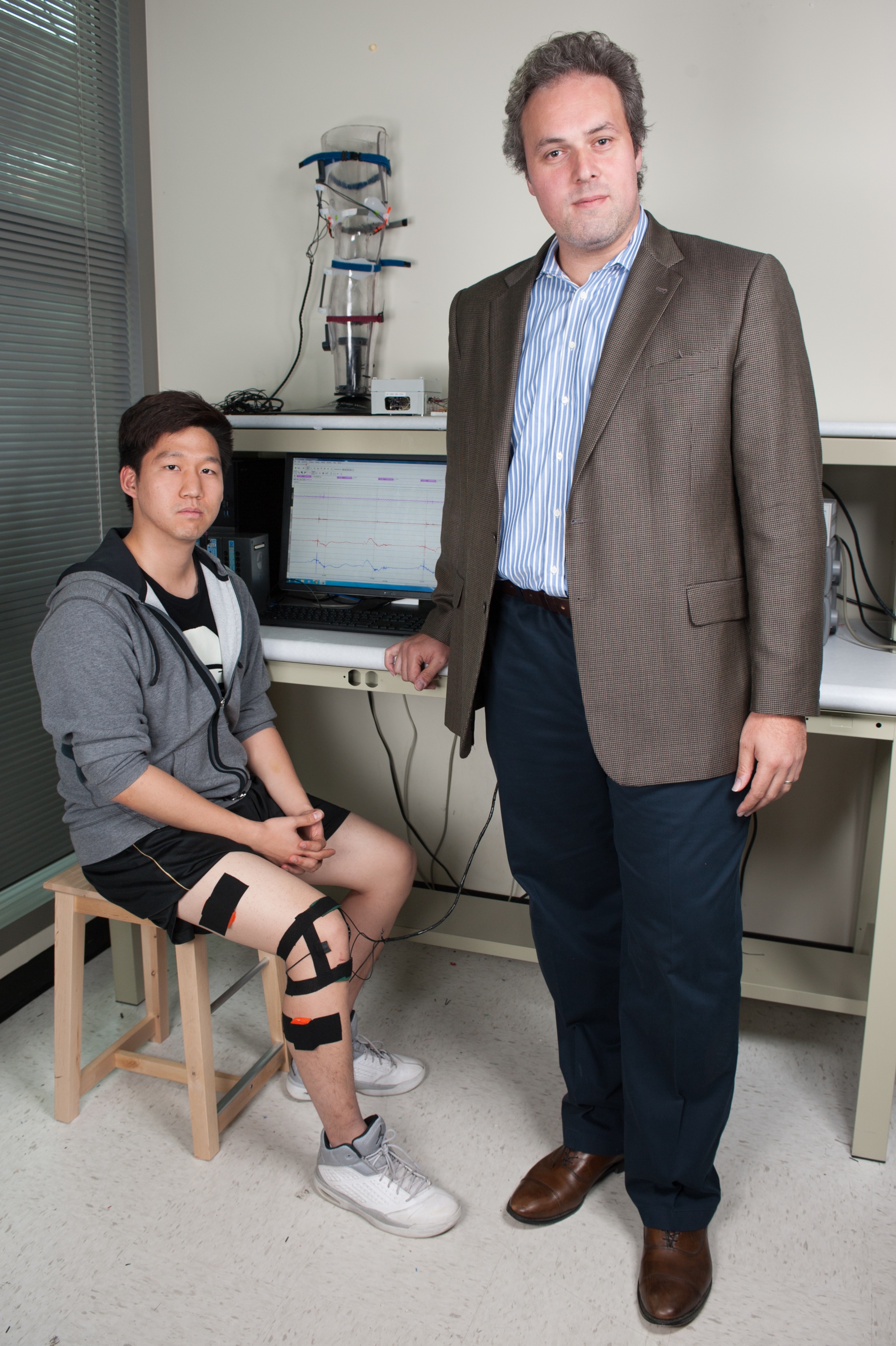 Former NCAA discuss thrower Prof. Omer Inan is working on a knee band that listens to crunchy sounds coming from the joint. Acoustic electronics turn them into moving graphs that may someday be medically useful. 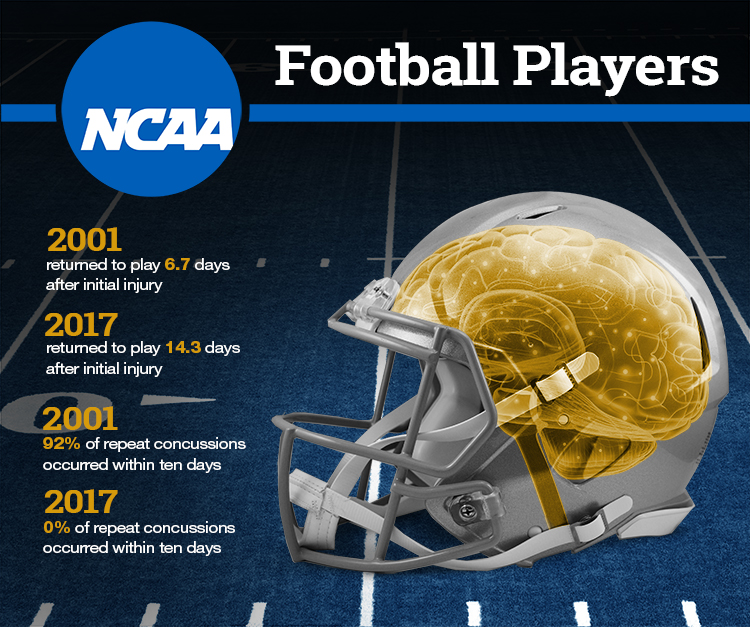 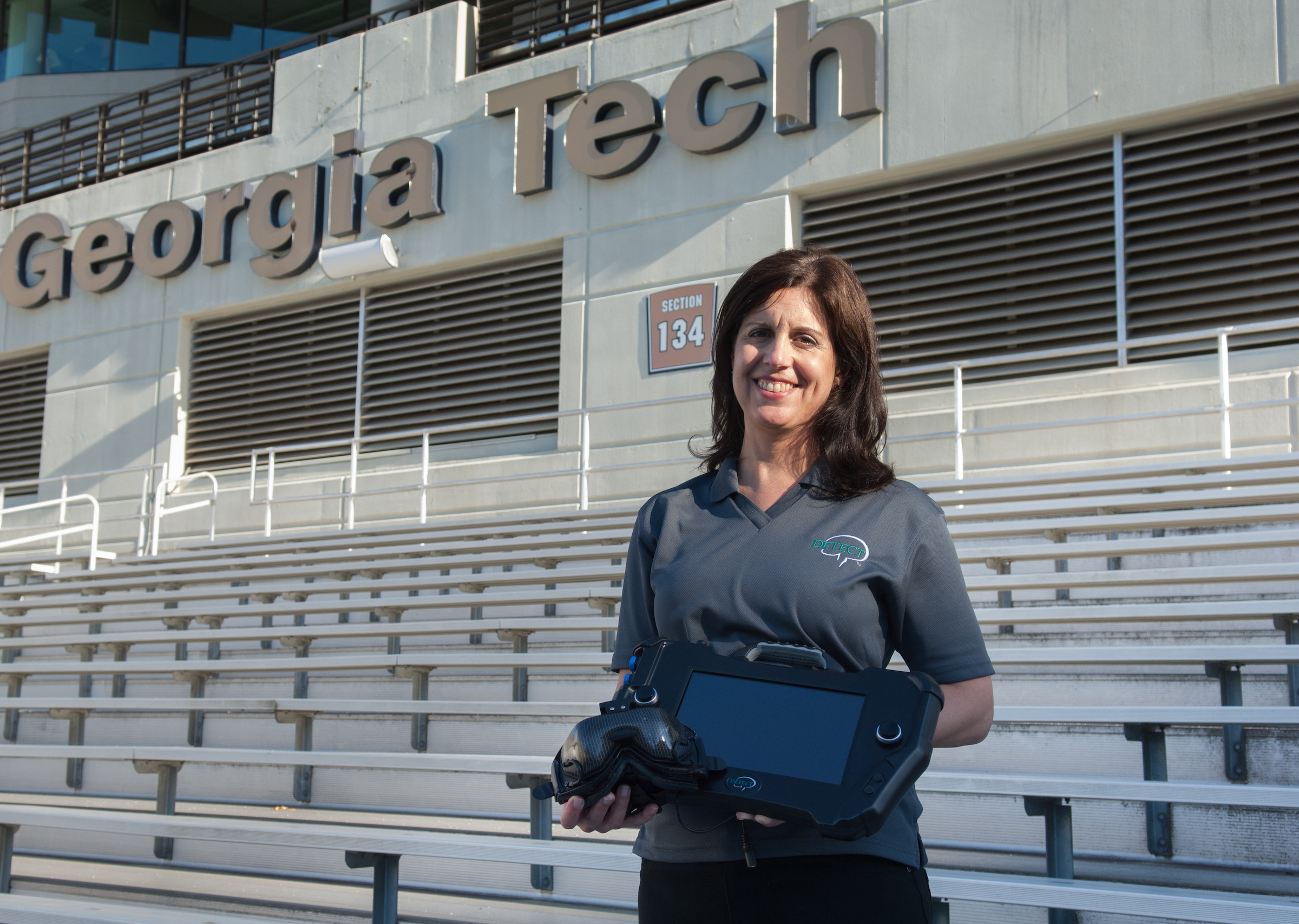