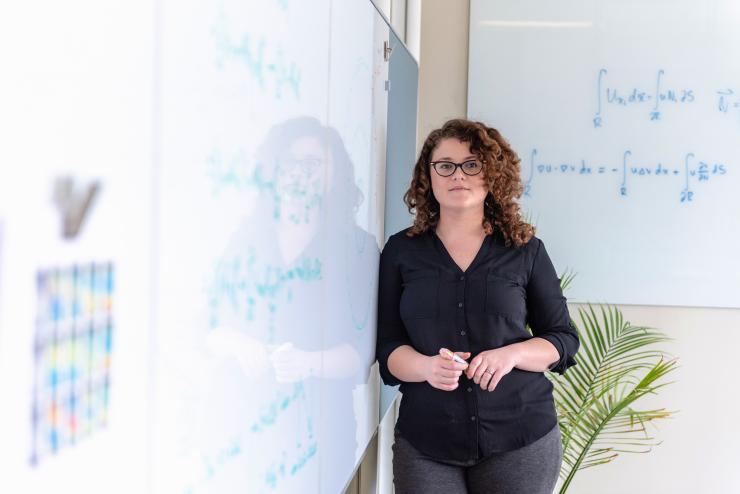 A new research study from researchers in the School of Biological Sciences and School of Physics focuses on the evolution of reproductive specialization – how early single cells first got together to create more complex multicellular organisms. In particular, scientists leading the study sought to better understand how those early cells decided which ones would focus on reproduction, and which ones would get busy building parts of a larger organism.

The work, published this month in the journal eLife, references “division of labor,” “trade,” “productivity” and “return on investment,” (ROI) to describe those cellular activities. If that sounds like a paper destined for a business magazine instead of a peer-reviewed journal on biological sciences research, there’s a good reason.

As the study, led by assistant professor Peter Yunker and associate professor Will Ratcliff, notes in the abstract, “A large body of work from evolutionary biology, economics, and ecology has shown that specialization is beneficial when further division of labor produces an accelerating increase in absolute productivity.” In other words, the prevailing theories state that specialization pays off only when it increases total productivity – whether it’s multicellular organism or widgets streaming out of a factory.

What Yunker, from the School of Physics and the Parker H. Petit Institute for Bioengineering and Bioscience, and Ratcliff, from the School of Biological Sciences and co-director of the Interdisciplinary Ph.D. in Quantitative Biosciences (QBioS) have found is that the conditions for the evolution of specialized cells were actually much broader than previously thought. Absolute productivity be darned, the cells seem to say; specialization appeared to be a winning strategy, even under conditions that should favor cellular self-sufficiency.

Why? It has to do with the topology of the network of cells within the organism – what Ratcliff calls a branchy structure. That topology determines that the division of labor can be favored, even if productivity suffers.

“Topological constraints in early multicellularity favor reproductive division of labor” is the title of the team’s paper. Yunker and Ratcliff collaborated with several other Georgia Tech faculty and graduate students on the research: Joshua S. Weitz, Patton Distinguished Professor in the School of Biological Sciences and co-director of QBioS; School of Physics graduate students David Yanni and Shane Jacobeen; and School of Biological Sciences graduate student Pedro Marquez-Zacarias. All are members of Georgia Tech’s Center for Microbial Dynamics and Infection.

As cells get more complex, they begin to specialize. Some cells are dedicated to reproduction, while others are devoted to other general tasks such as making and maintaining the organism’s body. “In this paper, what we’re trying to figure out is, when is it a good idea to specialize and have that pay off, and when it is a good idea for your cells to remain generalists?” Ratcliff says. “Under what conditions does evolution favor specialization, and in what conditions do simple multicellular organisms keep every cell a generalist?”

For centuries, scientists have known that specialization is very important for multicellularity. “Once we had microscopes, we were off to the races learning about specialization,” Ratcliff says.

The thinking for the last few decades has been that more specialized cells evolve when specialization results in increasingly higher productivity. “That will push things to complete specialization because there’s more to be gained by specializing than not specializing.”

Yet what if those cells are not interacting randomly with a lot of other cells, but only with a few cells over and over again? “This is actually the case for a little branchy structure that contains mom and all her kids. The only cells you are attached to are the ones that gave rise to you, and the ones that arise from you,” he says. Those “branchy structures” offer the topological constraints mentioned in the title of the research study.

Yunker explains that those tree-branchy structures can be thought of as similar to fractals, in which math functions are repeated again and again and are depicted as jagged borders stretching into infinity.

“Mandelbrot sets and the broader study of fractals have been an inspiration for a lot of this,” Yunker says. “After the concepts behind fractals were identified, people eventually started to see them everywhere. Instead of some unique esoteric thing, it was pervasive. In a similar vein, the structures that we find make evolving division of labor easier, these sparse filaments and branched topologies, are common in nature,” including so-called snowflake yeast and some forms of algae.

Yunker agrees that it may seem counter-intuitive, but as you restrict cellular interactions, like swapping of products that can enhance reproduction or specialization, that specialization actually becomes easier according to his team’s mathematical models.

Cells that produce the same products won’t interact or 'trade' with each other, since that would be a waste of energy and efficiency. “A redundancy comes into play here,” Yunker says. “If you have a lot of similar cells trading, that increased productivity doesn’t do you a lot of good. Whereas if you have dissimilar or opposites trading, even with lower productivity, they’re able to direct those resources in a more efficient manner.”

What can economists and cancer researchers learn from these cells?

Since economics has already figured into the study of how multicellular organisms evolved, with all of that labor and trade and ROI, could that discipline have something to learn from Yunker and Ratcliff’s new theory — could the lessons mean a more efficient way to make all kinds of products?

“Could this apply in economics? Could it apply elsewhere?” Yunker echoes. “This is something we would love to pursue going forward.”

Ratcliff notes the multidisciplinary approach his biophysics and biosciences team took to approaching the study, which also involved mathematical models developed by Weitz. “We were really motivated by understanding both how life got to be complex, and the rules for why it did,” he says. “This paper follows into the ‘why’ category. Fundamental mathematics tells you about the rules evolution plays by, and there are a lot of downstream applications, like cancer research, agriculture, and infectious disease. You never really can predict how someone will leverage basic insight.”