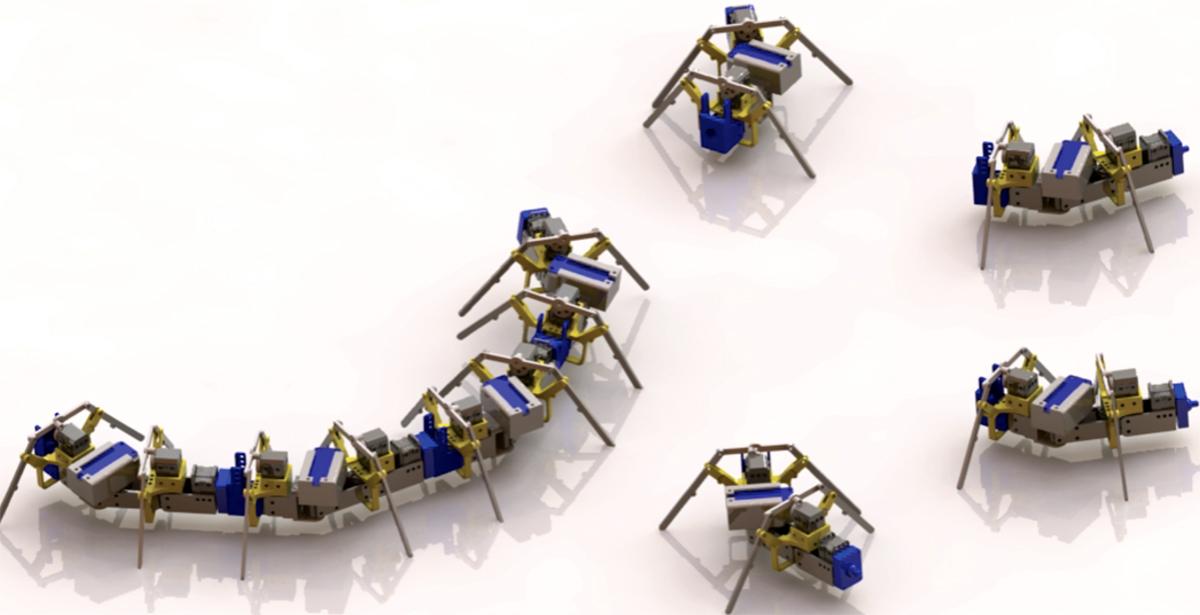 At the opening ceremony of this summer’s Tokyo Olympics, a fleet of 1,824 drones flew above the stadium, illuminating the night with an environmentally friendly light show. Such displays of reconfigurable, floating lights have one important common factor: a crash- and stumble-free navigable area in which to perform. The success of robotic swarms in aerial, aquatic, and land-based environments can be attributed to ease of navigation in a homogenous or highly controlled space.

But, what about more complex terrain? The capability that would allow land-based search-and-rescue robot swarms to navigate buildings and other disaster areas does not yet exist. Researchers at the Georgia Institute of Technology are working to develop simple, low-cost, legged robots capable of linking and unlinking to accomplish tasks, such as gap traversal, stair climbing, and object transport over uneven terrains.

Working with Daniel Goldman, Dunn Family professor in the School of Physics at Georgia Tech, Yasemin Ozkan-Aydin, a former postdoc in Goldman’s lab and now an assistant professor at the University of Notre Dame, developed “quadruped” robots using easily acquired off-the-shelf technology. Each unit has a 3D-printed, two-segmented chassis and body, four flexible legs, a “passive tail” appendage for additional balance and directional control, touch and light sensors, and a central-body-mounted microprocessor. A magnetic connector allows for docking and cooperative behaviors. The research team recently published its work in Science Robotics.

Reconfigurable swarm robots have been used in prior research into terrain solutions. But these units have limited motive abilities, require human intervention, and lack the desired ease of scale-up for manufacturing and use in a timely and cost-effective manner.

The new research takes advantage of enhanced mobility in multi-legged robots, mechanical intelligence (passive flexible legs and tail), and simple cooperative effect.  Individualrobots perform simple or small tasks, but if the task is beyond the capability of the one unit, a team of robots physically connect to each other and form a larger multi-legged system to collectively overcome issues.

Additionally, the team’s use of widely available technologies – like 3D printers – could lead to cost-effective and rapid development of terrestrial robotic teams that can collaboratively move heavy or dangerous objects. They could also be used for search-and-rescue operations, environmental monitoring, or even space exploration.

Ozkan-Aydin sees the work as a starting point in the development of land-based robot swarms with the ability to climb hills, overcome obstacles, and move on rough terrain by maintaining stability in a truly autonomous fashion.

“The development of physical connection between individual robot units can improve the mobility of an entire terrestrial collective system, and help prevent failures when attempting a task,” said Ozkan-Aydin. “Furthermore, the minimalist and modular robotic approach taken in this study can provide a low-cost platform for testing or generating new hypotheses for biological research.”

See the robot in action here