The Secret to the Skillful Skydiving of Wingless Springtails

Early in the pandemic, Víctor Ortega-Jiménez was exploring creeks near his home and observing springtails. The organisms are the most abundant non-insect hexapods on earth, and Ortega-Jiménez suspected their avoidance of predators had something to do with their ability to jump on the water surface and land perfectly in the same spot.

Ortega-Jiménez brought the hypothesis back to his lab in Georgia Tech’s School of Chemical and Biomolecular Engineering (ChBE). Using a combination of computational and robophysical modeling, as well as fluid dynamics experiments, the researchers were able to see for the first time the mechanics of springtail movement. They determined how springtails control their jump, self-right in midair, and land on their feet — all within the blink of an eye — effectively saving them from predators.

“These extraordinary organisms with unique morphology live at a very precarious place: the water surface,” said ChBE Assistant Professor Saad Bhamla. “So, when they jump from and land back on water, we must understand the effects of both hydrodynamics and aerodynamics. How they land perfectly on their feet almost every time on the surface of water was the puzzle we set to solve in this paper.”

Ortega-Jiménez, Bhamla, and their collaborators presented this research in “Directional Takeoff, Aerial Righting, and Adhesion Landing of Semiaquatic Springtails,” published in the Proceedings of the National Academy of Sciences.

“Nobody has ever shown experimentally what the collophore is really for, and we're showing that it’s for their survival. They need this for stability, controlling their takeoff but more importantly how to perfectly land like an acrobat.” – Victor Ortega-Jiménez 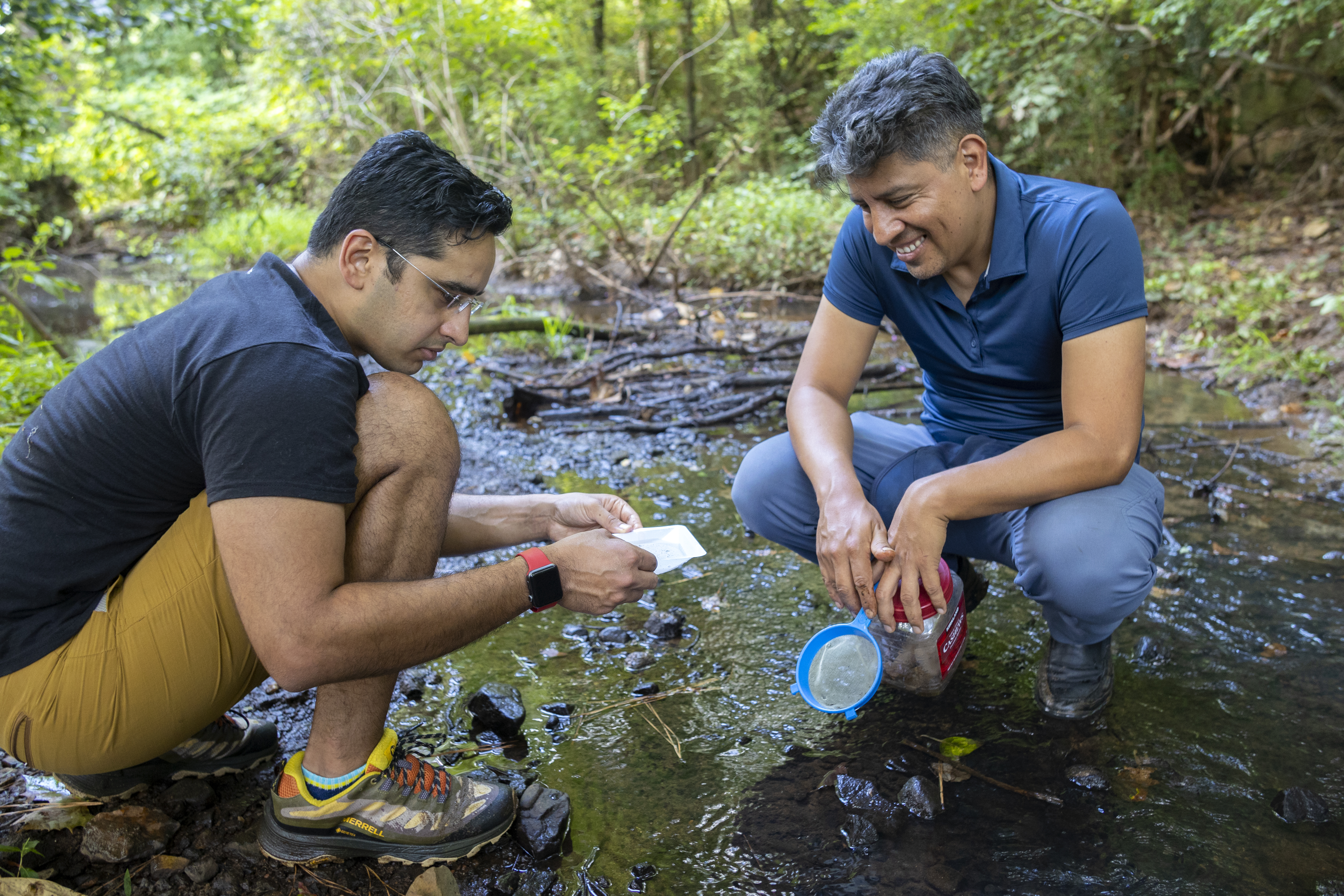 The researchers discovered that springtails are so successful because of posture and mostly by their unique appendages for jumping and adhesion. First, they adjust the angle of their leaping organ, the furcula, when they take off. Then they change their posture midair into a U-shape that creates aerodynamic torque, effectively self-righting them 20 milliseconds into the jump, the fastest of any wingless organism. They land on a collophore, an appendage particular to the springtail that holds water.

Springtails are part of the Collembola family, organisms that are known for having a hydrophilic collophore, a tube-like structure that holds a water droplet and can adhere to surfaces. The researchers determined this collophore is essential for the springtail to glide on the surface of water and effectively land on its feet without bouncing. With high-speed imaging and a hydrodynamic oscillator force mathematical model — using surface tension, inertia, buoyancy, drag, capillary dissipation, and adhesion forces — the researchers calculated how the springtail takes advantage of its collophore for stable landings that release energy through capillary waves.

“Nobody has ever shown experimentally what the collophore is really for, and we're showing that it’s for their survival,” Ortega-Jiménez said. “They need this for stability, controlling their takeoff but more importantly how to perfectly land like an acrobat.”

After the researchers observed the jump, they found that springtails could control their takeoff angle and speed. They broke it down into a mathematical model to determine how precise these jumps were in a computer simulation. The model suggested that if springtails can control the angle of their body, they can glide on the surface of the water with their collophore, validating Ortega’s experimental observations.

Researchers explored the self-righting ability of springtails by using dead and living springtails in a wind tunnel, as well as using freefall physical models. They found that the springtails' U-shaped posture and a droplet collected by the collophore create the perfect landing.

“This work shows just how important controlled motion is for predator escape and survival,” said Kathryn Dickson, a program director at the National Science Foundation, which partially funded the research. “Springtails could not have become the most abundant non-insect hexapod without being able to control their gymnast-like escape response. In addition to being fascinating to watch, this new understanding of the biomechanics of how springtails control their jump, spin in midair, and land safely on water could lead to advances in fields from robotics to aerodynamics.” 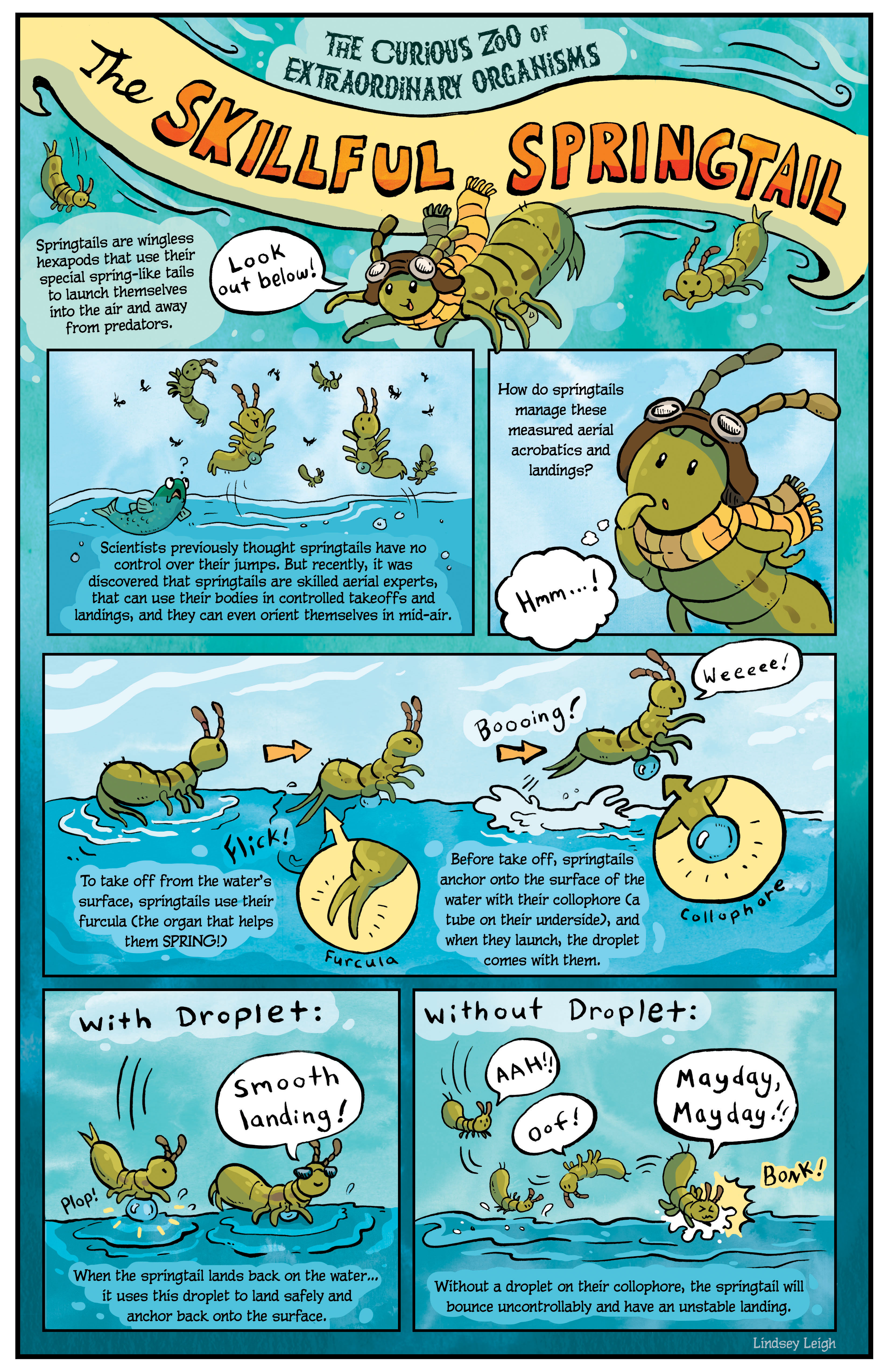 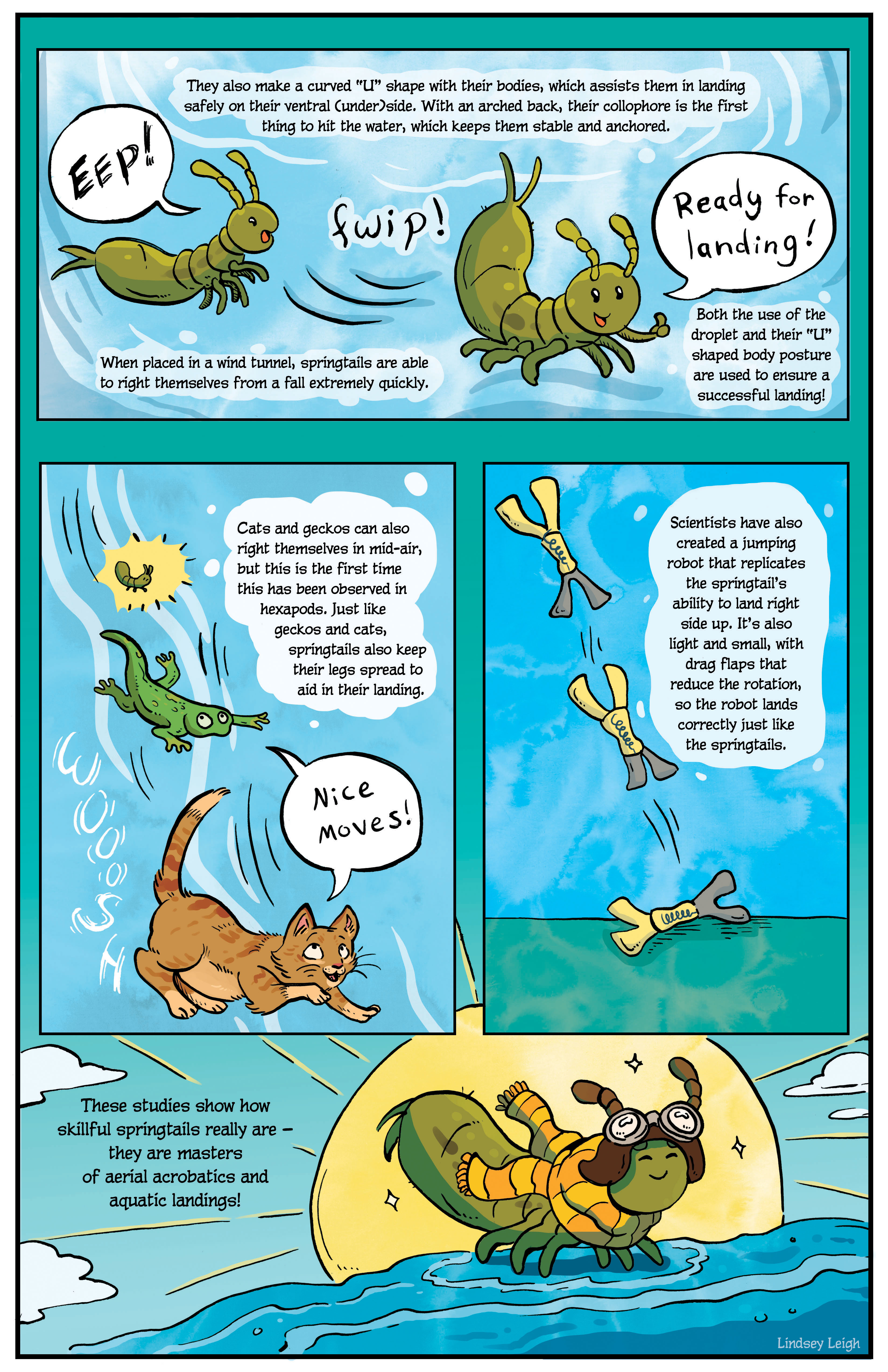 Next, the researchers built small robots to replicate their experimental and computational observations in a physical environment in collaboration with Professor Je-sung Koh’s team at Ajou University in South Korea.

“It has been a major challenge for jumping robots, specifically at small scales, to control their orientation in the air for landing and jumping,” Koh said. “The finding in this research could inspire insect-scale jumping robots that are able to land safely and expand the capability of robots in new terrains, such as the open-water surfaces in our planet’s lakes and oceans.”

The researchers created a small robot with drag flappers to validate the observations that a collophore and body shape are needed to land.

“We show in three different cases that the native robot spins out of control and lands unpredictably,” Bhamla said. “But as you add each of these increments, like the drag flappers, we demonstrate the robot can achieve stability and land on its feet.”

“We are now opening this Pandora's box of what smaller animals can do,” Ortega-Jiménez said. “There is a belief that because they are tiny, they don't have as much control as big animals do. So, we are opening some possibilities of control at this small scale that could give insights into the origins of flight in organisms.” 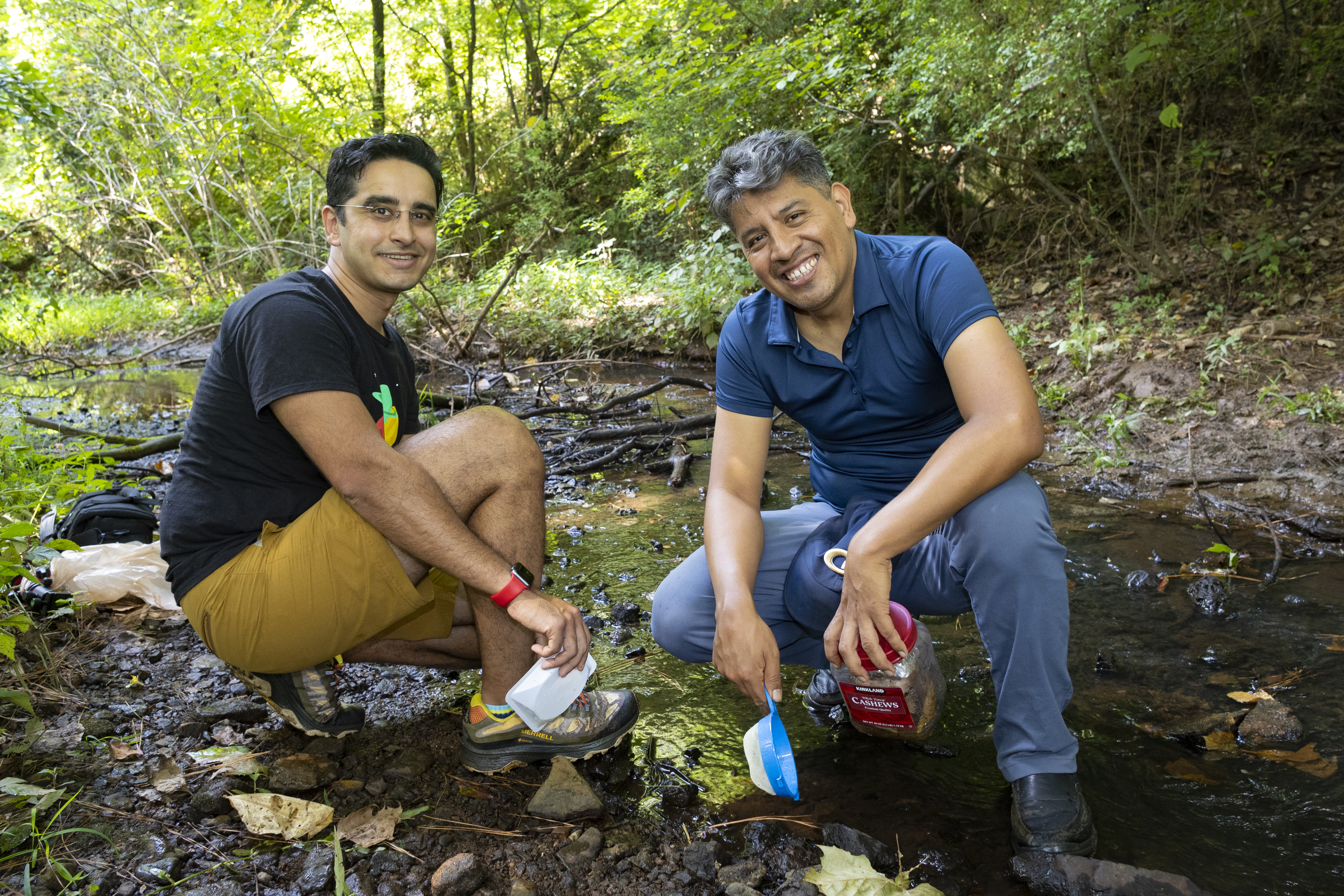