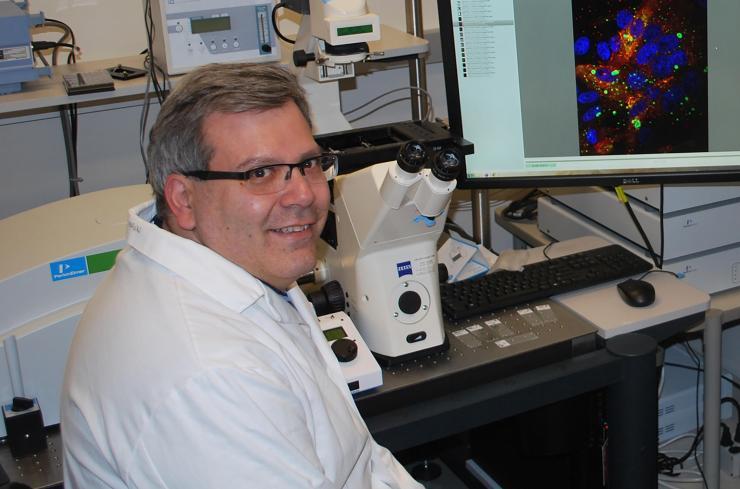 Phil Santangelo is using an NIH grant to develop an HIV vaccine.

Around the world, human immunodeficiency virus (HIV) has infected about 36 million people, and 1.8 million new cases emerge every year, with more than 90 percent of the infections spread through sexual contact. It remains a disease embedded in social and economic inequality, affecting impoverished communities across the globe at a disproportionately high rate.

There have been hopeful developments – anti-retroviral therapy has improved the outlook of HIV-infected patients. And recently approved pre- and post-exposure prophylaxis regimens have proven to work. But these preventive measures have potential side effects, require strict daily adherence, don’t really prevent other sexually transmitted infections, and they’re expensive.

Addressing the need for a better, more affordable approach, Georgia Institute of Technology researcher Phil Santangelo has been awarded a $3.5 million R01 grant from the National Institutes of Health (NIH) to develop a low-cost, self-applied, durable system based on messenger RNA (mRNA) to deliver neutralizing antibodies to prevent HIV in women.

The Santangelo team’s approach provides protection within a few hours, and one application lasts at least a month. And it might be just the beginning of what Santangelo calls, “next-generation mRNA drugs on the horizon. We’re also working on expressing antibodies against other infectious agents and hope to create a suite of mRNA-based prophylaxis to prevent infection from a wide range of pathogens,” said Santangelo, a professor in the Wallace H. Coulter Department of Biomedical Engineering at Georgia Tech and Emory University.

This is the latest phase of his lab’s work using synthetic mRNA as a delivery system for therapeutic antibodies. In a 2018 study, the team explored using mRNA to supply antibodies directly to the lungs, via aerosol, to prevent respiratory syncytial virus infection. And last year, Santangelo won an NIH/National Institute of Child Health and Development grant to develop a new mRNA-mediated system in which antibodies are introduced into the female reproductive tract to inhibit sperm function.

This new R01 grant, awarded in September, will support work Santangelo and his colleagues described earlier this year in the journal Molecular Therapy. The title of the paper also provides an apt description of the team’s approach: “Aerosol Delivery of Synthetic mRNA to Vaginal Mucosa Leads to Durable Expression of Broadly Neutralizing Antibodies against HIV.”

The vaginal mucosa are mucous membranes that protect the skin inside the vaginal cavity. It makes a good platform for delivering drugs locally and systemically because of its large surface area, high degree of vascularization, avoidance of first-pass metabolism by the liver, good drug permeability, and its accessibility for self-application. Santangelo’s team hypothesized, based on previous work, that aerosolizing mRNA diluted in water could transfect the female genital tract, where infected cells rapidly permeate. The use of water as a solvent increased the rate at which small-molecule drugs and nanoparticles reached the vaginal epithelial surface.

Using the mucosa as a platform, the team demonstrated in animal models that aerosolized mRNA induced the expression of antibody PGT121 at high concentrations in the vagina and cervix.

“Overall, we present a new paradigm to deliver neutralizing antibodies to the female reproductive tract for the prevention of HIV infections,” the researchers wrote.

Easy to apply as a spray, expression is achieved quickly through aerosol delivery and the preventive effects last at least a month, according to the team’s data.

“We’re working on increasing that durability,” Santangelo said. “The whole point is to develop approaches that give women some control over their health. There’s lots of work to do in this space, but I think we can make a real difference in women’s lives.”