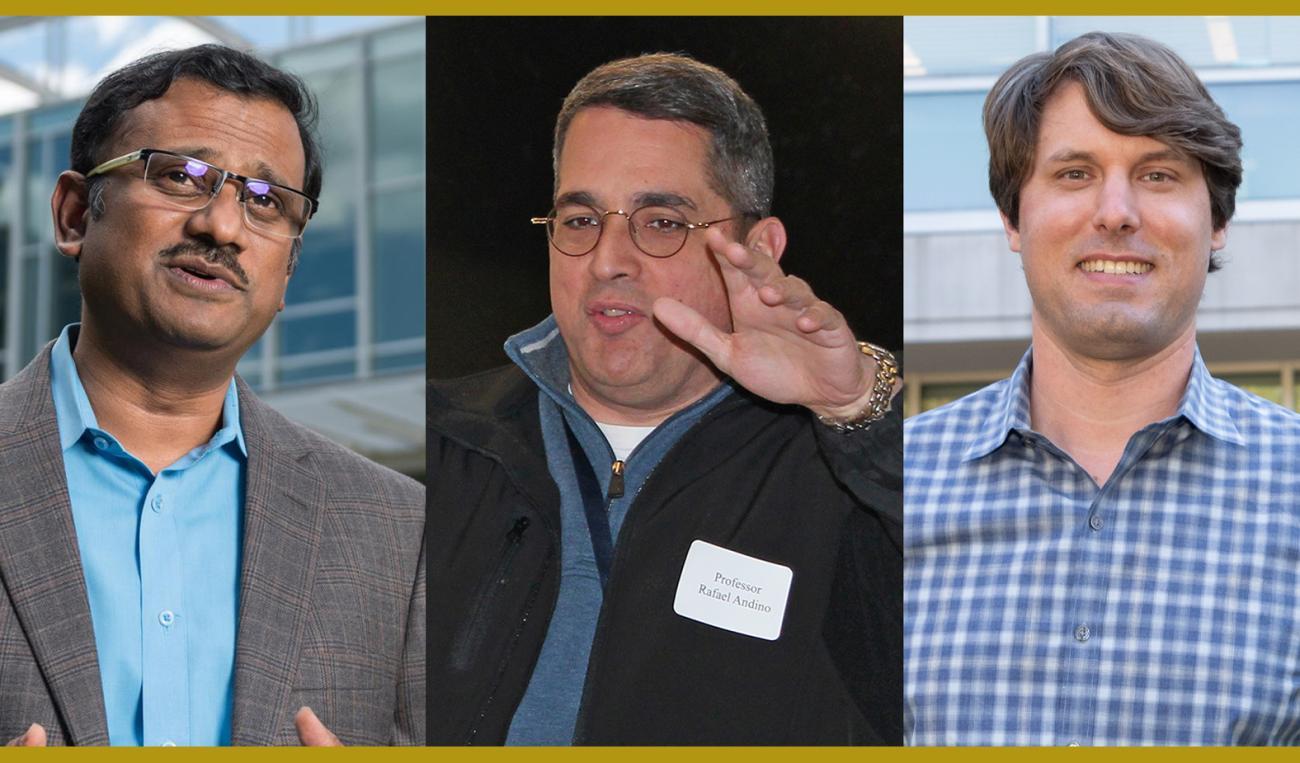 The highest honor — the 2022 Industry Growth Award — will go to Professor Krishnendu Roy and Rafael Andino, a member of the Coulter BME Advisory Board and instructor in the Master of Biomedical Innovation and Development program. The award recognizes two people each year who have made extraordinary contributions to the growth of the life sciences industry in Georgia.

Also representing Coulter BME at the event, which is expected to draw about 300, will be Associate Professor James Dahlman. Beam Therapeutics’ acquisition of his startup Guide Therapeutics is being honored as one of the Deals of the Year.

“This year's Georgia Bio Industry Growth Award is being presented to two people who have made an extraordinary contribution to the growth of the life sciences industry in Georgia,” said Maria Thacker Goethe, CEO of Georgia Bio and the Center for Global Health Innovation (CGHI). “Clearside Biomedical’s Rafael V. Andino and Georgia Tech’s Krish Roy have been longtime participants in the Georgia Bio community and are nationally recognized leaders in their respective fields. ”

For Andino, who is Clearside’s vice president of engineering and manufacturing and earned his undergraduate degree in mechanical engineering at Georgia Tech, the award is recognition of a career that began on the ground floor of a growing industry.

“I was probably one of the first graduate biomedical engineers that went to work in in the biomedical industry in the late 1980s, and there’s been unlimited growth opportunity for the past 35 years,” Andino said.

He also found time to serve as an officer in the Air Force Reserve for the past 20 years, while helping to develop and launch dozens of medical products, technologies, and drugs that have benefitted patients around the world.

“To do it from right here in Atlanta has been unbelievable,” said Andino, who also has worked in leadership positions for Bard Medical, and founded and led a company called Biofisica that developed technology to speed wound healing and regeneration of connective tissue.

“The job creation these product launches led to have been very gratifying,” he said. “I’m thankful to the Atlanta area biotech community.”

In addition to his faculty role in Coulter BME and running a busy lab, Roy is director of several research enterprises at Georgia Tech with global impact, including the National Science Foundation Engineering Research Center for Cell Manufacturing Technologies (CMaT) and the Marcus Center for Cell-Therapy Characterization and Manufacturing (MC3M).

“I’m deeply humbled to receive this highest honor from Georgia Bio,” said Roy, Robert A. Milton Chair in Biomedical Engineering. “I think we’ve made tremendous progress in growing the biotech industry infrastructure in the state, and Georgia Bio’s leadership in transforming the biotech landscape has been instrumental.”

So has Roy’s. Through his leadership of both CMaT and the Marcus Center, he’s helped forge a strong industry-academia network, which he said has helped put Georgia “on the advanced therapies map for industry.

“We’ll continue to work to bring more biotech companies to Georgia and collaborate closely to accelerate research, development, and workforce training in partnership with Georgia Bio and other stakeholders,” he added.

Dahlman cofounded Guide Therapeutics in 2018 based on barcoding technology developed in his lab. The idea is to develop the tools for guiding gene therapies, using lipid nanoparticles. It’s a good enough idea that Beam Therapeutics paid $120 million up-front in an all-stock deal announced in February 2021.

"Although a lot of work remains, these technologies have a chance to impact patients," said Dahlman, McCamish Foundation Early Career Associate Professor. "The science being done at Georgia Tech, Emory, and more broadly, in Atlanta and Georgia, is exciting. I'm optimistic our universities and companies will continue to push translational science, and I look forward to seeing the biotechnologies that come out of the area in the coming years."