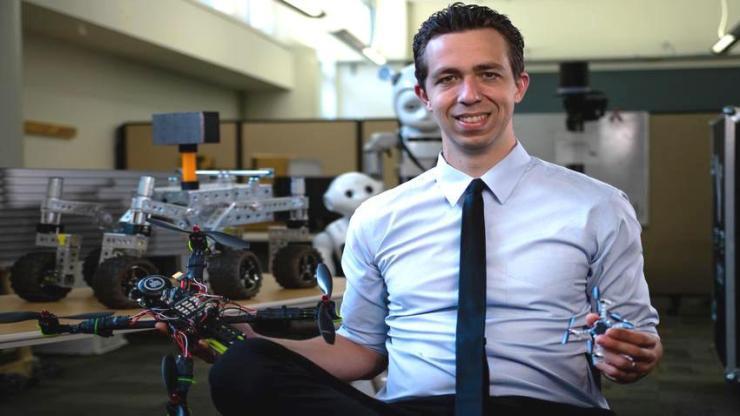 Matthew Gombolay has always had a heart for the healthcare industry.

When he was 20 years old, Gombolay was diagnosed with supraventricular tachycardia (SVT) and had to have heart surgery to avoid serious health complications that he could have faced anytime. SVT causes an unusually fast or rapid heartbeat that affects the heart’s upper chambers.

Gombolay said he first knew something was wrong when he developed a rapid heartbeat when he was 14, but the condition was misdiagnosed as a symptom of puberty.

He knows the surgery saved his life.

“They gave me my life back,” said Gombolay, assistant professor and Director of the CORE Robotics lab at the School of Interactive Computing. “I’m immensely grateful for the field of cardiology.”

Gombolay received the prestigious National Institutes of Health RO1 grant, which will fund a three-year study of how robotics can improve and minimize the risks of open-heart surgery. Gombolay has partnered with Roger Dias, assistant professor of emergency medicine at Harvard Medical School, and Marco Zenati, professor of surgery at Harvard Medical School and chief of cardiothoracic surgery for the U.S. Department of Veterans Affairs to conduct the study.

Dias is also the Director of Research & Innovation at the STRATUS Center for Medical Simulation at the Brigham and Women’s Hospital in Boston, which specializes in the research of human performance across high-risk clinical settings. For example, the STRATUS lab is also in a partnership with NASA in developing training solutions on how to perform medical procedures in space.

Dias said the use of robotics and data collection to stymie human error in medicine immediately stood out to him as something he wanted the STRATUS lab to be involved in.

“The reality is, human errors happen all the time,” Dias said. “Some studies estimate that human error is one of the leading causes of death in the United States. Some of those errors are unavoidable, but a considerable number of human errors in the operating room are avoidable. The support system we are creating is really going in that direction of trying to make surgery safer, by helping surgical teams during complex decision making.”

Dias wanted to start with one of the most complex procedures — heart surgery. And one of the most challenging aspects of heart surgery is the management of a heart-lung bypass machine by a perfusionist. During most heart surgeries, the surgeon operates on a heart that isn’t beating and has no blood flow, while a perfusionist uses the heart-lung bypass machine to temporarily serve as the heart and the lungs.

Perfusionists oversee a complex and cognitive-demanding procedure. As any human, they are subject to fatigue, stress, and distractions, all of which could compromise patient safety. As of right now, it’s a job in which knowledge about best practices only comes through hands-on experience.

“Cardiac surgery may have between seven to 11 to 12 different people in the room and each one with a different function, different role,” Dias said. “The complexity of cardiac surgery really brought our attention to this type of research.

Gombolay designed a perfusionist-monitoring robot that can help track which specific moments of the procedures cause the most stress to the perfusionist as well as identify any distractions that may be affecting performance. The goal, Gombolay said, is not to replace perfusionists, but to support them by making as much relevant information as possible available to them and to create a gold standard across the medical industry.

“If a robot learns to do better than the status quo, the robot could learn to provide helpful explanations to give the surgical team insights into its decision making,” Gombolay said. “What can the machine teach us about the right metrics and how can that help predict outcomes? Maybe the machine can teach us what matters in order to improve the standardization of care.”

Rithy Srey, the Chief Perfusionist for the U.S. Department of Veterans Affairs who works with Zenati, will be one of the main perfusionists studied by Gombolay’s machine. In his 21 years of experience as a perfusionist, Srey has never had a fatal incident, but the stress and anxiety from the possibility of something going wrong is always there.

“There’s always a scare factor,” Srey said. “Your adrenaline will kick in; your heart is basically at the bottom of your stomach. Your fear for that patient’s life; that’s what keeps you focused.”

A lot of that anxiety comes from the unknown variables involved with each procedure. Patients may have some similarities, but each one is unique, Srey said.

“Some patients have higher red cell counts than others and some are sicker than others,” he said. “The way we flow is according to what the patient’s blood volume is and what the patient needs. There’s an average consideration to what the flow should be, but then you have someone who’s diabetic or someone with a kidney issue. How are you going to protect them?”

While a machine-learning system will directly benefit younger perfusionists in their training and early careers, Srey said more experienced perfusionists will welcome it with open arms.

“Too much experience under our belts, we get lackadaisical,” Srey said. “You become too relaxed and too jaded in the system to the point a computer system could help you. We don’t want to slack off.”

Dias began using Gombolay’s machine to gather data on live procedures on Sept. 1. He said by the end of the project he will have studied more than 100 procedures, which is about 400 hours of collected data. At the beginning of the second year, Dias will begin sending that data to Gombolay, who will mine it to create and test algorithms that can predict a perfusionist’s decisions.

By the third year, Gombolay and his team will have created an interface prototype that can be used in simulated procedures to help inform people training to become perfusionists. If those trials are successful, the machine could be ready to enter the medical industry and become a standard tool used in live heart procedures.

The biggest challenge along the way will be building trust with potential patients, who may be skeptical about an AI’s role in their medical treatment. Dias said one of the biggest reasons he wanted to partner with Gombolay is his ability to solve that problem.

“This is one of his areas of expertise — to work on the trustworthiness of AI systems,” Dias said. “That’s something we plan to address in this RO1. One is the trustworthiness of AI systems, and the other is the explanation of AI systems. They’re not going to trust because they want to know why. That’s what we call an Artificial Intelligence “black box” problem. Sometimes your algorithm is 100 percent accurate, but you cannot explain why the algorithm reached that decision.”

Gombolay said he’s up for the challenge. He recognizes the significance of being selected for an ROI, and it’s not something he’s going to take for granted.

According to the National Institutes of Health website, an RO1 grant is “an award made to support a discrete, specified, circumscribed project to be performed by the named investigator(s) in an area representing the investigator’s specific interest and competencies, based on the mission of the NIH.”

In general, the NIH grants RO1s to support projects it knows will have a beneficial outcome to its mission.

“I never imagined applying for one, let alone getting one,” Gombolay said. “When I got invited to do this, I was like, sure, sounds fun. The fact that we got one is just disbelief. It’s so competitive. Now we just have to deliver.”