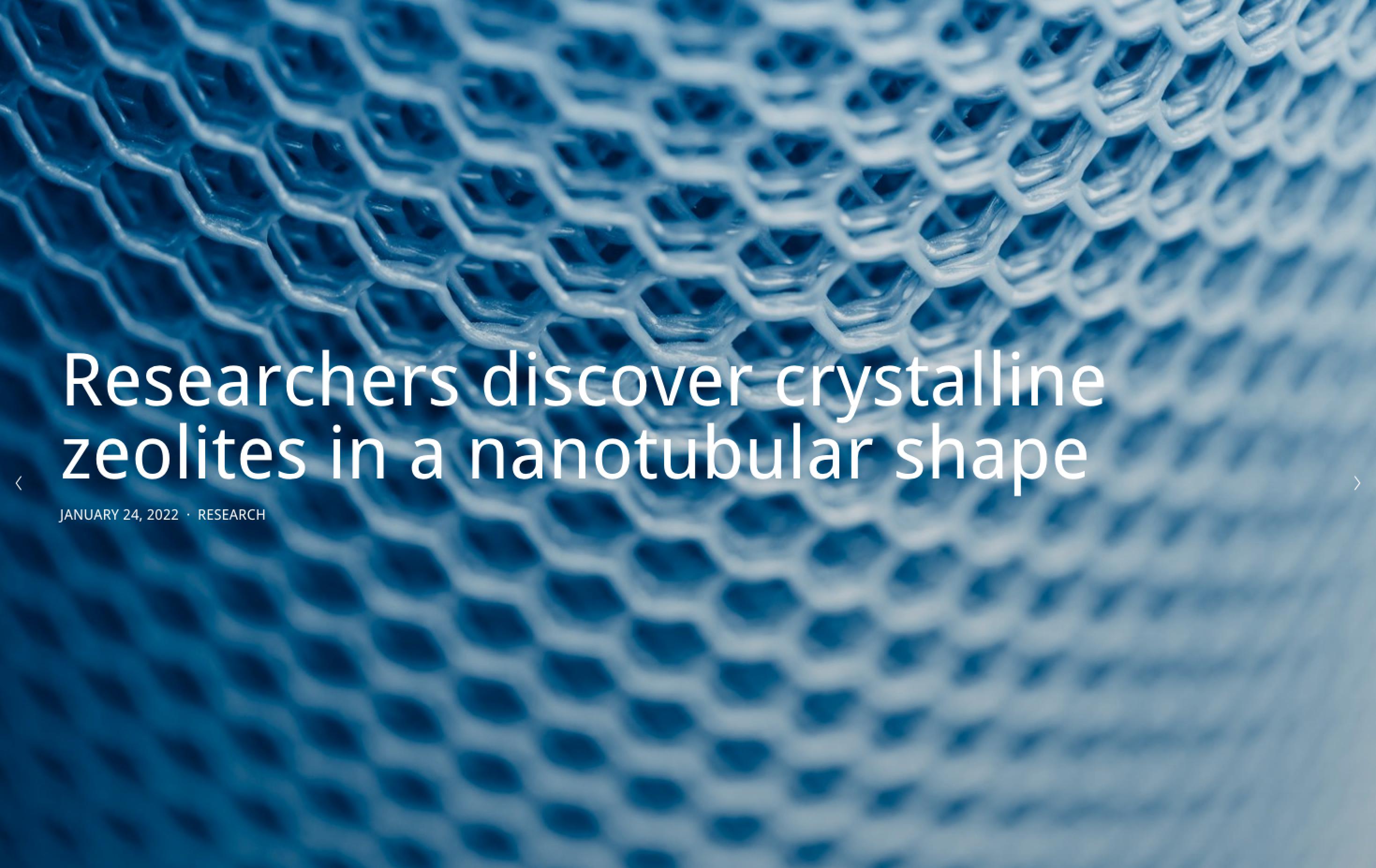 Zeolites, which are crystalline porous materials, are very widely used in the production of chemicals, fuels, materials, and other products.

Zeolites, which are crystalline porous materials, are very widely used in the production of chemicals, fuels, materials, and other products. So far, zeolites have been made as 3D or 2D materials. This has changed with the recent discovery of crystalline zeolites in a nanotubular (1D) shape, by researchers at the Georgia Institute of Technology, Stockholm University, and Penn State University. The findings were published in the Jan. 6 issue of Science.

"A discovery like this is one of the most exciting parts of our research," said Sankar Nair, principal investigator and professor in the School of Chemical & Biomolecular Engineering at Georgia Tech. "We're increasingly used to doing research that has a pre-determined application at the end of it, so this is a reminder that fundamental discoveries in materials science are also exciting and important."

Zeolites have pores roughly the size of many types of molecules, and scientists and engineers have used the varied sizes, shapes, and connections of the pores to discriminate between molecules of different sizes, allowing for the production of chemicals suitable for plastic production, or for the separation of undesired molecules from desired ones, as examples.

The team was designing syntheses to assemble 2D zeolite materials. In an unexpected turn of events, some of the results indicated that a new type of assembly process was occurring. Indeed, one such case led to a novel 1D zeolite material that had a tube-like structure with perforated porous walls. This 1D material, termed a zeolitic nanotube, was unlike any zeolite ever synthesized or discovered in nature previously.

"Zeolite nanotubes could be used to make entirely new types of nanoscale components that can control transport of mass or heat or charge, not only down the length of the tube the pipe, but also in and out through the perforated walls," said Nair.

Resolving the detailed arrangement of the atoms in the zeolite nanotube was a challenging task, for which the Georgia Tech researchers teamed up with zeolite crystallography experts at Stockholm University and Penn State. They found that the nanotube walls had a unique arrangement of atoms that are not known in 3D or 2D zeolites. This same arrangement is also responsible for forcing the zeolite to form as a 1D tube rather than a 2D or 3D material.

"This is the first example of a new class of nanotubes, and its unique and well-defined structure provides exciting ideas and opportunities to design zeolite nanomaterials," said Tom Willhammar, co-investigator and researcher at Stockholm University. "Through further work, we hope that different zeolitic nanotubes could be obtained with variations in pore size, shape and chemistry."

Put plainly—a nanometer-scale tube made from a 1D material with regular, perforated holes on the sides is now available for exploration. In addition to this being a fundamental scientific discovery that could change the way we think about designing porous materials, the researchers see potential for many practical applications.

"The unique structural attributes of these materials will allow for an array of potential applications in membrane separations, catalysis, sensing, and in energy devices where mass or energy transport are crucial," said Christopher W. Jones, co-principal investigator and professor at Georgia Tech. "The materials may have unique mechanical properties, as well, finding applications in composite materials, as carbon nanotubes have done.  At this stage, the sky is the limit, and we hope researchers will look for creative ways to deploy these materials for the benefit of humanity."