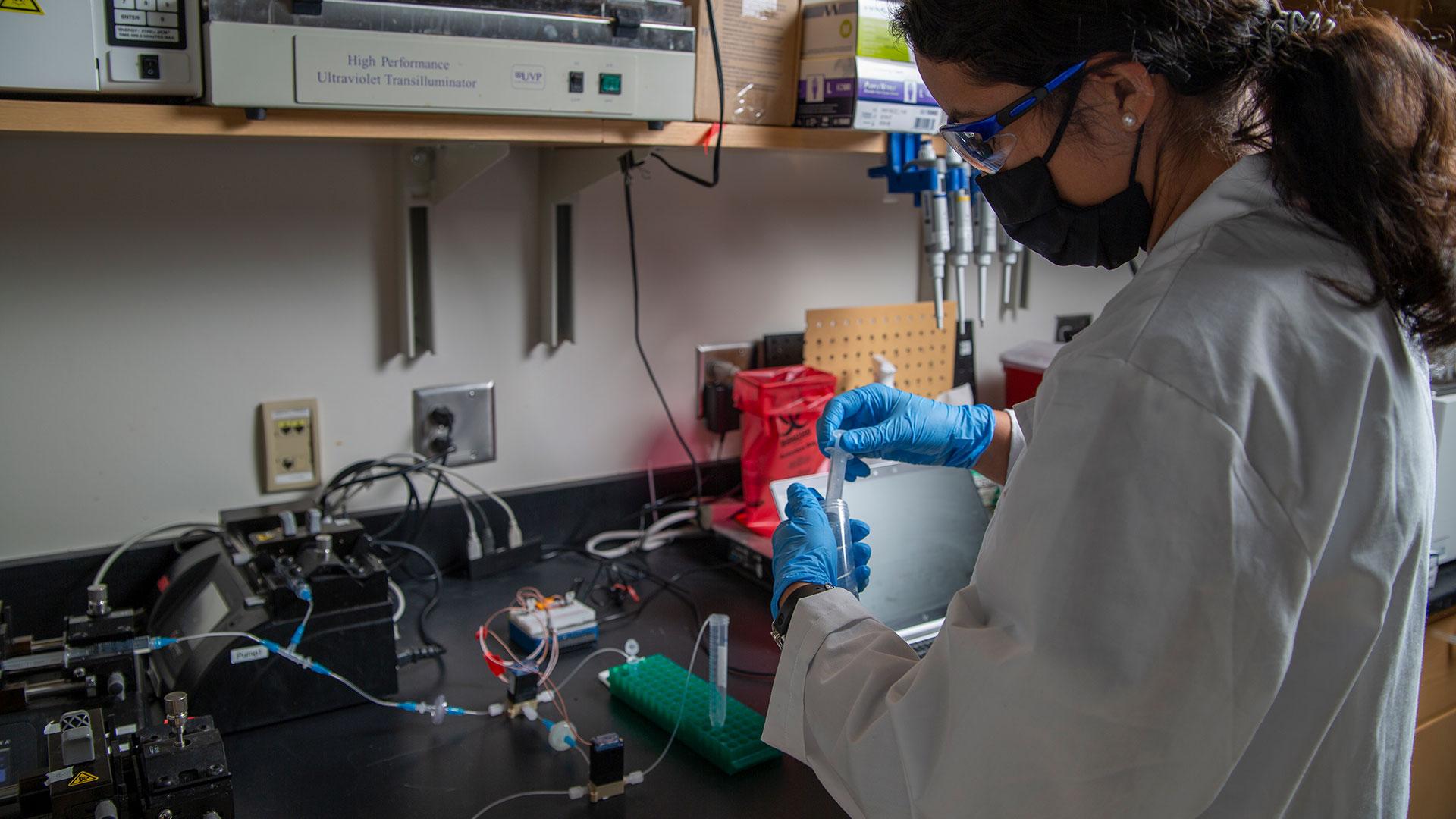 Nina Sara Fraticelli-Guzman, a graduate research assistant in Georgia Tech’s School of Mechanical Engineering, demonstrates a microfluidic system that would concentrate fluid samples containing particles collected from building air. In a fully operating system, the fluid would be analyzed for the presence of SARS-CoV-2, the virus that causes COVID-19. (Credit: Christopher Moore, GTRI)

Tests to detect SARS-CoV-2 infection in humans have become more widely available as the Covid-19 pandemic approaches the end of its second year. But rapidly monitoring for and detecting infectious virus aerosols within indoor environments is currently not possible.

As workers go back to the office and children return to school, knowing what’s in the air they breathe is important because scientists now understand the role that airborne virus particles play in transmitting this highly infectious disease. In a program funded by the Defense Advanced Research Projects Agency (DARPA), researchers at the Georgia Tech Research Institute (GTRI) – in collaboration with scientists and engineers from the Georgia Institute of Technology and the semiconductor company Cardea Bio – have taken important steps toward developing a system that would continuously monitor building air for the SARS-CoV-2 virus.

“The idea is that if somebody in a medium-sized building were sick with the virus that causes Covid-19 and spreading that infection by talking, singing, coughing or sneezing, we would be able to detect that and sound an alert within 15 minutes,” said Mike Farrell, a GTRI principal research scientist leading the project. “At the downstream sensor level of the system, we were able to show specific detection of SARS-CoV-2 with about a thousand viral particles in a very pure sample. We are now working to demonstrate that the front-end collection and fluidics filtering and sample concentration strategies can collect enough air to deliver a sample containing that amount of virus to the sensor.”

The sheer volume of air that would have to be monitored in a medium-sized office building creates an extreme “needle-in-a-haystack” search. The GTRI researchers are combining capture of virus-containing particles from the air with a wet-walled cyclone – collecting air at 2,000 liters per minute – and a microfluidic sample volume concentrator that ultimately feeds the sample into a biosignal processing unit (BPU). The BPU captures and detects SARS-CoV-2 virus particles via an artificial antibody-like bioreceptor attached to a graphene surface that is specific for the virus.

The SenSARS project has not yet met DARPA’s goal of detecting a single viral particle in one liter of air. The GTRI team is still working toward that goal and planning to integrate the system into the kind of package that might one day become part of building HVAC equipment.

“This is the next generation of bio-detection,” said Farrell. “But it’s really, really difficult, and we’re not there yet.”

DARPA funded four different research organizations to pursue indoor air monitoring goals, and the GTRI team chose to develop a system for continuously monitoring air in a 10-story office building. Phase I funding for the project ends in November 2021.

The system being developed by the GTRI research team would work like this to capture virus particles:

The artificial bioreceptor was developed by the Army Research Laboratory (ARL) and provides improved performance over the more commonly used antibodies – including faster and lower cost production and far better shelf life for distribution and storage considerations. Another important advantage of the ARL receptor is that it can be rapidly adapted to binding a wide range of pathogens, Farrell said.

“With the proper controls, you can significantly reduce false positive and false negative signals and make a reasonable assumption that a specific target has been bound to the bioreceptors,” Farrell said.

The BPUs are manufactured by Cardea Bio, a San Diego-based company that mass produces biocompatible semiconductors. Other components of the system were developed by the laboratories of David Hu (bioaerosol collector) and Craig Forest (fluidics filtering and concentration). Hu and Forest are professors in Georgia Tech’s College of Engineering.

Farrell says the greatest challenge is separating out and specifically detecting the micron-scale viral particles of interest from other micron-sized dust, pollen and debris typical of office air.

“There’s a lot of background that you have to deal with,” he said. “There are other viruses in the air that we are not concerned with, and there are dust, pollen and dirt. You have to deal with that background, and that’s where the specificity of the bioreceptor on the surface of the BPU is really key.”

This building monitoring project builds on earlier GTRI studies done for the Department of Defense that focused on the detection of potential adversarial use of bioweapons in the field. If such weapons were ever used, they would likely deploy high concentrations of pathogens to rapidly infect large numbers of people (or crops) to overcome the dilution factor inherent in airborne dissemination.

“In the biological warfare scenario, you have a target-rich environment, so sensitivity is not so much of an issue,” Farrell said. “If you can detect 10,000 particles per liter of air, you should be easily able to meet the goal of real-time detection for early warning to save lives.”

The continuous monitoring strategy could be used to detect other pathogens by simply switching out the bioreceptors, Farrell said. GTRI researchers are also working on advanced technologies to more rapidly detect chemical and nuclear threats.

“Working with researchers at GTRI, Georgia Tech and commercial companies to solve biological problems represents a huge opportunity to advance not only DoD interests on the battlefield, but also closer-to-home human health issues such as clinical diagnostic devices for the rapid identification of infectious disease,” said Farrell. “Ultimately, this technology translates to earlier pathogen detection than is currently available. Rapid detection equates to timelier administration of medical countermeasures and better patient outcomes.” 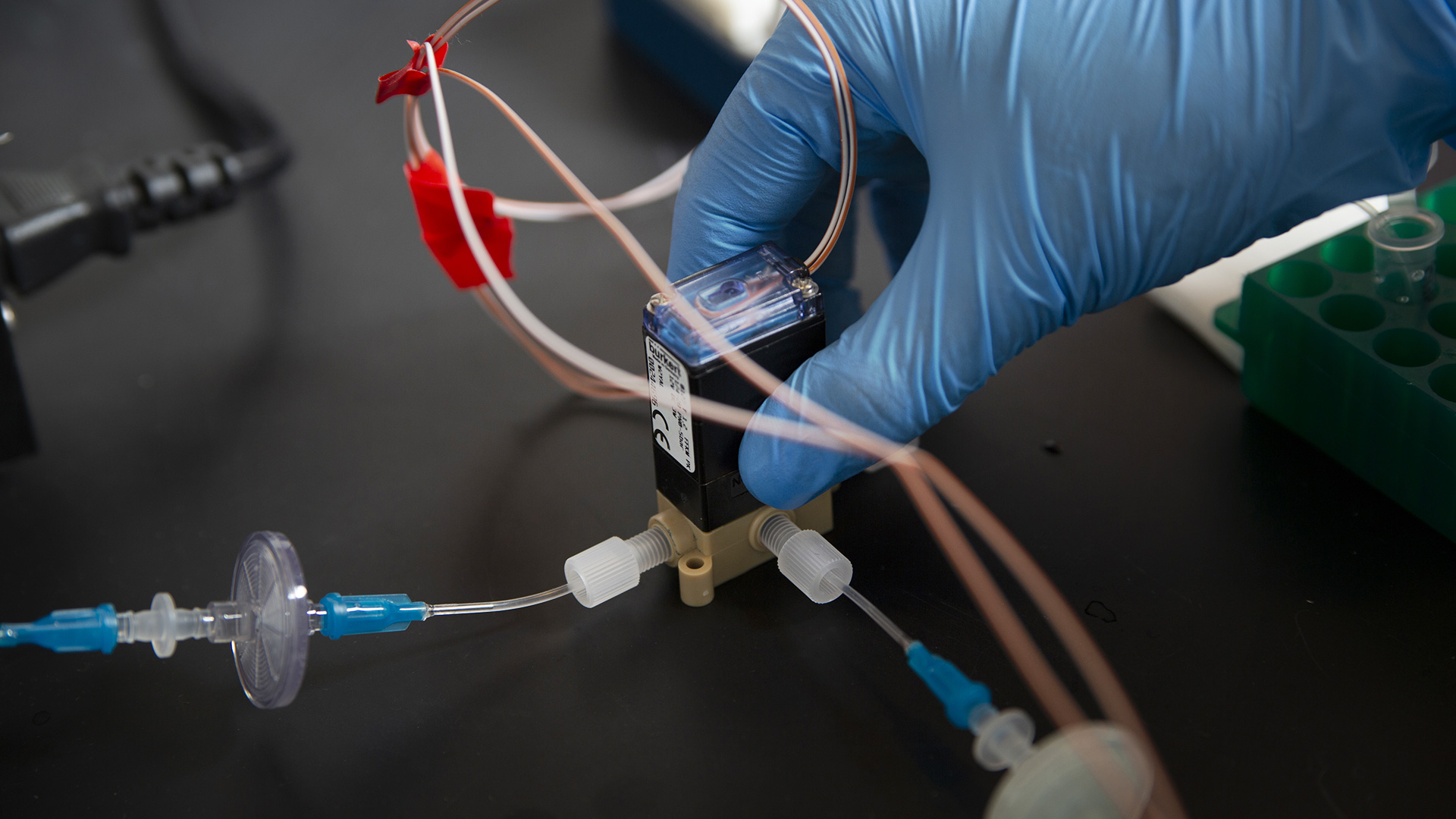 A microfluidic system concentrates a fluid sample that would contain particles collected from the air of an office building. In a fully operating system, the fluid would be analyzed for the presence of SARS-CoV-2, the virus that causes COVID-19. (Credit: Christopher Moore, GTRI) 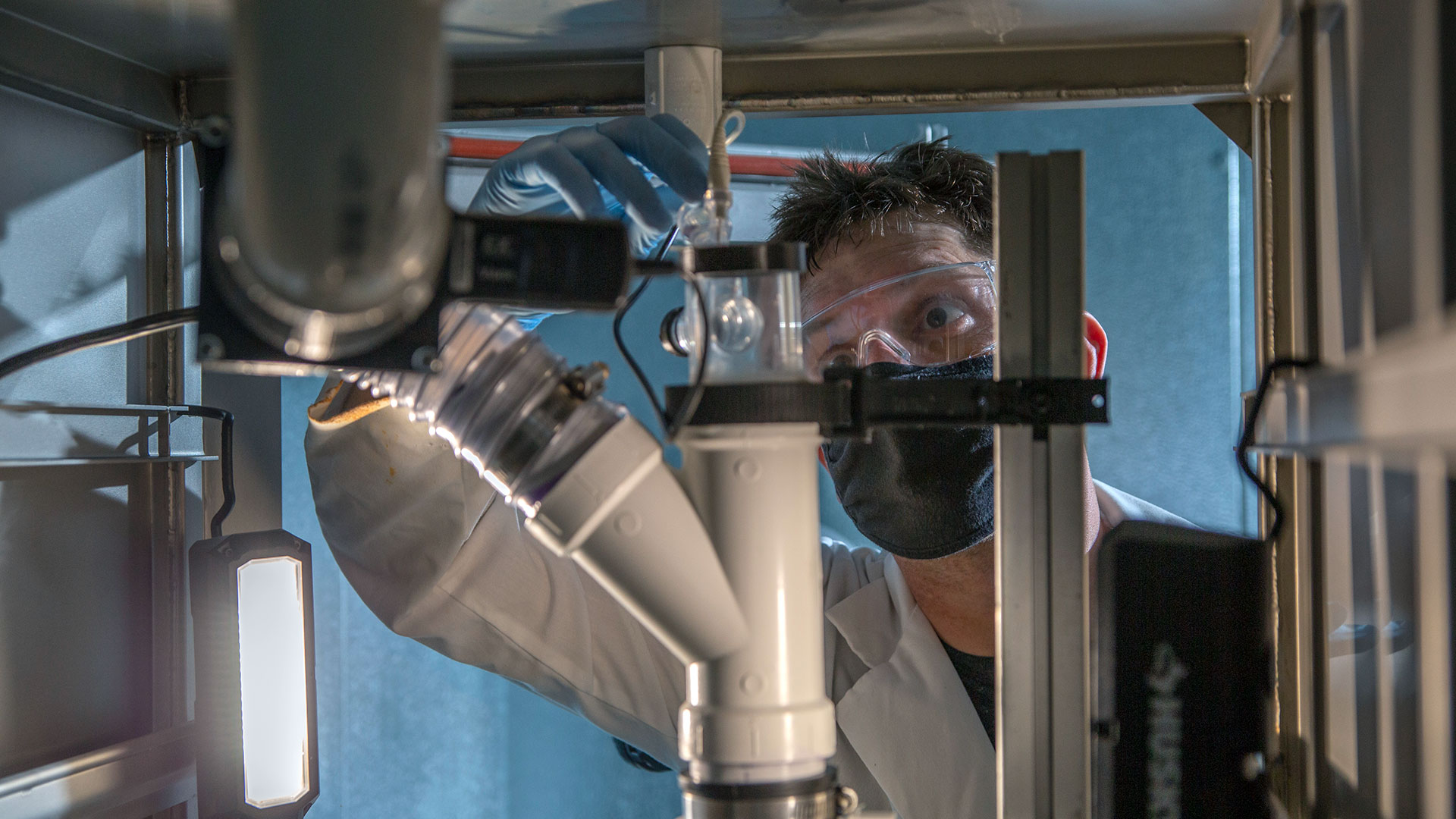 Seth Stewart, a graduate research assistant in Georgia Tech’s School of Mechanical Engineering, adjusts equipment designed to sample building air for the presence of the SARS-CoV-2 virus that causes COVID-19. Particles from the air would be concentrated and then analyzed using a sensor that captures and detects the presence of virus particles. (Credit: Christopher Moore, GTRI)