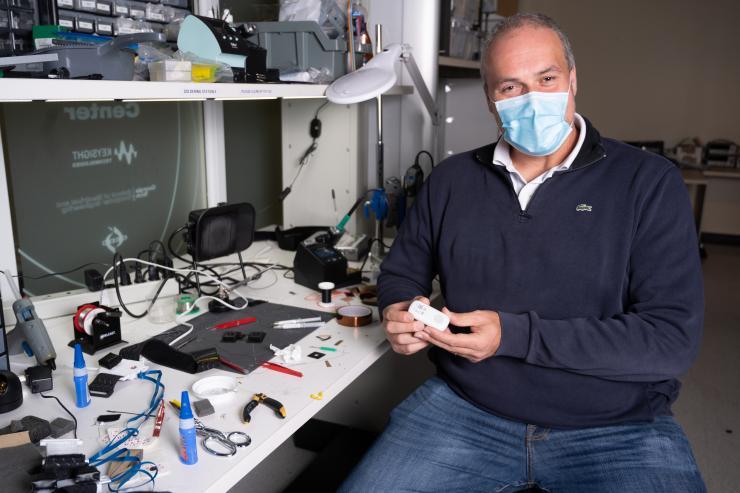 Omer Inan is the Linda J. and Mark C. Smith Chair in Bioscience and Bioengineering and associate professor in the School of Electrical and Computer Engineering.

PTSD, or post-traumatic stress disorder, doesn’t discriminate. It affects about 15 million adults in the U.S. each year. And more than half of the people with PTSD are left with a severely impaired quality of life, including disturbing thoughts, feelings, or nightmares related to their traumatic experience, as well as fear, sadness, and anger, or detachment from others. It’s a disabling psychiatric disorder with few treatment options.

“The concept was to see if this commercially available stimulation device could be used to reduce the physiological response to the stress triggers that PTSD patients encounter,” said Inan, the Linda J. and Mark C. Smith Chair in Bioscience and Bioengineering and associate professor in the School of Electrical and Computer Engineering. “And our results were very encouraging – they suggest that this is a practical, safe, and novel treatment.”

Patients simply press the device against their neck, where the vagus nerve is located and apply the electrical stimulation.

For the recent study, 20 patients with PTSD were exposed to traumatic scripts – a common psychological technique to help trauma survivors make sense of their experience while exposing them to painful memories. This is followed by immediate stimulation by either an active vagus stimulation device or a sham device. Three months of this self-treatment led to a 31%decrease in PTSD symptoms for patients using the nVNS, as well as reductions in hyperarousal symptoms and overall anxiety, in other words, an overall reduction in the body’s fight or flight response.

The research results were found to be sufficiently compelling by the FDA to accelerate gammaCore’s use as a treatment for PTSD through the Breakthrough Device Program, which speeds the development of medical devices for the more effective treatment of life-threatening or irreversibly debilitating conditions.

For Inan, this was the first of two back-to-back FDA designations concerning his lab’s technology. The second came on Feb. 15, when Cardiosense, a company Inan co-founded, received Breahthrough Device clearance for its algorithm to identify patients at risk of heart failure.

For the PTSD treatment pilot study, Inan’s lab used its noninvasive tech to focus on cardiovascular signatures, “that relate to the level of flight or flight response, measurements that change significantly with vagus nerve stimulation, which we just didn’t know before,” he said.

The foundation for this work, Inan added, began with funding from the Defense Advanced Research Projects Agency, DARPA, “which set the scientific premise for why this device could work in patients with PTSD,” he said.

That was several years ago, and it set Inan on a search for clinicians at Emory who were researching PTSD. And that’s how he found Bremner, former director of the Yale Trauma Research Program and current director of the Emory Neuroscience Research Unit.

“It’s a collaboration that has worked out well because our groups are very complementary, and we get along well,” said Bremner, professor of psychiatry and radiology in Emory’s School of Medicine and lead author of the study, who sees the potential in a noninvasive treatment with no side effects.

“It’s still early in the game, but people are beginning to realize that this is potentially a very useful tool for a number of different medical disorders,” Bremner said.

And Inan’s group at Georgia Tech sees the current state of nVNS research as part of its ongoing effort to establish a closed loop vagus nerve stimulation system, “in which one could potentially measure physiological signals and help prevent stressful responses in the first place,” Inan said. “So, even before their bodies react to the stress, the stimulation could intervene.”

Statement of Disclosure: Bremner has research funding support from ElectroCore. Both active and sham stimulation devices used in the study were provided by ElectroCore free of charge. Inan has financial interest in CardioSense (which was not involved in the PTSD study). 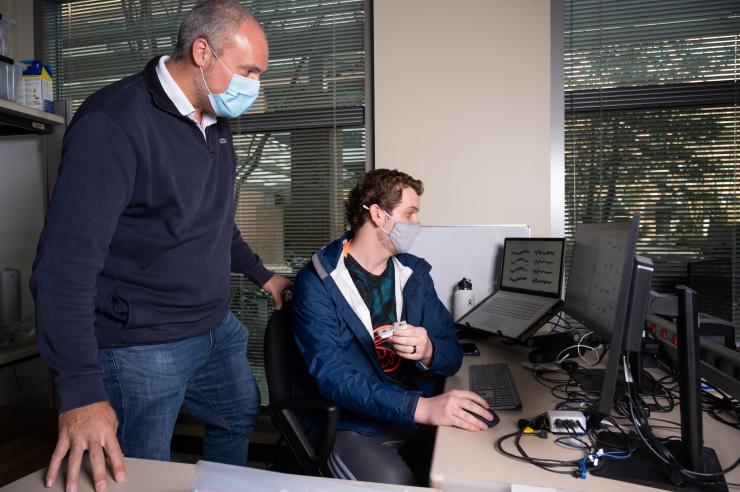