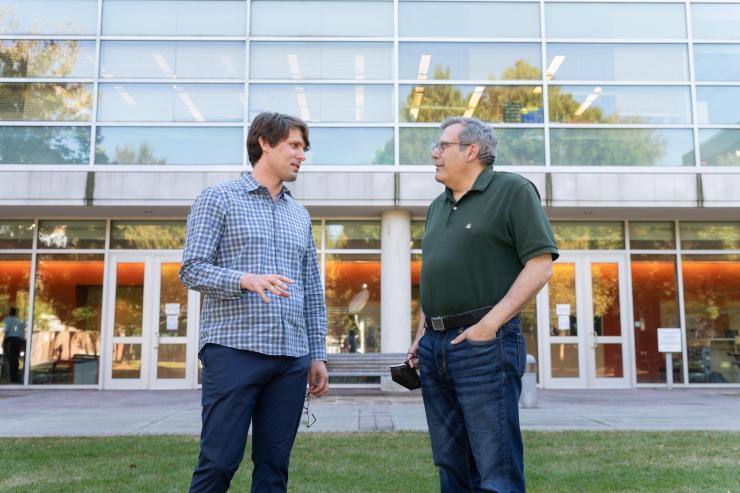 James Dahlman and Phil Santangelo are helping to define an evolving era in medicine, one in which messenger ribonucleic acid — mRNA — can be delivered directly to cells to fight against disease. And their latest groundbreaking study could clear the way to faster therapeutic discoveries.

Long before the Covid-19 pandemic put a global spotlight on mRNA-based vaccines, these two researchers in the Wallace H. Coulter Department of Biomedical Engineering at Georgia Tech and Emory University were combining their distinct skillsets to leverage the clinical potential of mRNA.

Therapeutics made from mRNA or DNA hold promise in addressing lots of diseases, explained Santangelo, a professor in Coulter BME, “but they’re not much good if they can’t get where they need to go. If you make cargo, which is essentially what we do in my lab, you need delivery, so James and I have a very natural collaboration.”

Their partnership, which began when Dahlman arrived at Georgia Tech in 2016, consistently yields results published in high-impact journals and garners generous research grants from federal agencies, including the National Institutes of Health (NIH) and the Defense Advanced Research Projects Agency (DARPA).

That includes a recent flood of cutting-edge papers: two in Nature Biomedical Engineering (from October 2021, and a forthcoming study) as well as their latest publication, released Feb. 7 in Nature Nanotechnology.

Several years ago, Dahlman and collaborators developed a technique called “DNA barcoding,” which allows for the rapid, simultaneous screening of many of his custom-made delivery vehicles — what are called lipid nanoparticles, or LNPs. Scientists insert unique snippets of DNA into different LNPs, which are injected into mice. Genetic sequencing is then used to determine which barcodes have reached which specific targets.

“Lipid nanoparticles are usually developed in mice, but when you move them into another species, like a non-human primate — because that’s the natural progression, a primate is more like a human — they frequently don’t work as well,” Santangelo said. “When they don’t, you have to go back and make adjustments.”

But what if you could streamline the process?

The genes that affect LNP delivery vary between pre-clinical species and humans, though the extent of those differences is unknown because studies comparing nanoparticle delivery across species have been very difficult to perform. Until now. To speed that process, the researchers developed a new testing system they’re calling Species Agnostic Nanoparticle Delivery Screening, or SANDS.

“We can actually put the same group of nanoparticles in all three and compare delivery across species,” Dahlman said. “We found what you might expect: delivery in the primate cells predicted really well how delivery in the human cells would go, whereas the mouse cells were less predictive.”

Unlike the previous barcoding system, which worked well in mouse cells, SANDS needed a different kind of marker for screening, a molecule called reporter mRNA. Santangelo’s lab developed one, “and it basically gets around the limitations of the old system,” he said. “Now we can screen new lipid nanoparticles in mice with primate and human cells.”

SANDS already is facilitating further studies for the research team.

Going forward, Dahlman and Santangelo believe that deeper understanding of the different mechanisms driving delivery in mouse cells and other cells will result in a more efficient selection process for LNPs, making pre-clinical nanoparticle studies more predictive and accelerating the development of RNA therapies.

That sense of building momentum has been kind of a theme for the Dahlman-Santangelo partnership since it began. Dahlman remembered interviewing at Georgia Tech and Emory and being immediately impressed when he met Santangelo.

They immediately recognized the value and the necessity for collaboration, especially because, as Santangelo put it, “This is a wildly competitive time in mRNA research.”

The pace of their work reflects that, too. Their October study in Nature Biomedical Engineering reported development of an LNP designed specifically to be delivered by a nebulizer into the lungs. In their experiments, it successfully delivered therapeutic mRNA and protected mice from a lethal flu. They’ve got several more papers nearing publication.

And there’s work soon to be funded by the Wellcome Leap program that includes a project focused on mRNA-encoded antibodies for the lung. They’re also developing what could be another game-changer in vaccinations — what Santangelo described as “a new type of approach that has a lot of potential: The basic idea is to have the ability to vaccinate against many pathogens at once.”

“It means that we can write papers that are much more complete,” Santangelo said. “It includes all of the data, and it can have sequencing, it can have imaging, it has fancy cargoes, it has cool delivery. You put together all of those pieces, and you have a nice package.”