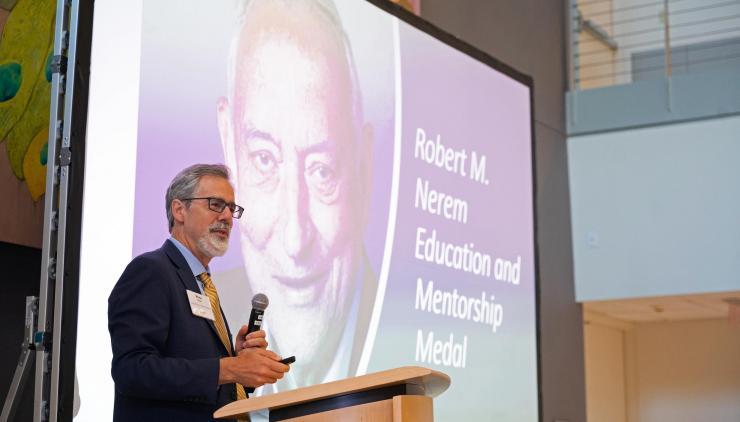 Ross Ethier shares his memories of Bob Nerem, founding director of the Petit Institute for Bioengineering and Bioscience.

Ross Ethier collected his thoughts and emotions as he stood at the podium beneath the gigantic, multi-colored Cell Wall in the atrium of the Institute for Bioengineering and Bioscience at Georgia Tech – or IBB, as it has been known for decades. To the dozens of people hanging on Ethier’s words the acronym has always stood for ‘It’s Bob’s Building,’ as in Bob Nerem, IBB’s founding director who was remembered by family, friends, and colleagues, including three university presidents, last Friday, July 29, at the Bob Nerem Symposium.

Ethier recalled a memory of early mornings at IBB when the place was still quiet but for the sound of a coffee machine, “and I would walk down the hallway right over there and poke my head into Bob’s office, and he’d be sitting there with his cup of coffee, surrounded by his piles of paper and folders, and I’d ask him, ‘Bob, do you have a second, I need some advice on something.’ He would say, ‘come in, my friend,’ and we would have the most wonderful discussion," said Ethier, professor of biomedical engineering and a longtime IBB faculty researcher. "Whatever we talked about, I always came out of it feeling wiser, feeling better, and somehow, my heart got a little bit bigger.”

The theme kept repeating itself throughout the all-day event, a long-awaited celebration of Nerem, a globetrotting pioneer in bioengineering who was 82 when he died on March 6, 2020. Dozens of speakers (there were more than 50), in person or virtually, shared their stories about Nerem, who spent 33 years at Georgia Tech, including 15 as director of IBB. Nerem, who also was instrumental in launching the Wallace H. Coulter Department of Biomedical Engineering at Tech and Emory University, had an easy, personal approach with colleagues that seemed to come naturally – indeed, that was part of his ‘Rules of Life.’ Nerem always insisted that research was a people business.

“I’ve always viewed Bob as my mentor, my role model, and my sage advisor,” said Roger Kamm, professor at the Massachusetts Institute of Technology (MIT) and winner of the first Nerem Education and Mentorship Medal from the American Society of Mechanical Engineers (ASME) in 2018. “There is no reward or recognition that could have meant more to me. And I’ve done my best to live up to Bob’s rules of life, which have been posted outside my office door for years.”

“I was so lucky to know Bob Nerem, so lucky he was on the faculty here – he helped me do many of the things that I’ve been given credit for,” Clough said. “And he had this wonderful love for life and great empathy for other people. He worried about his students, and worried about kids in high school who didn’t have the money to go to places like Georgia Tech. So, he raised the money.”

Clough, like many who spoke last Friday, was specifically referring to Project ENGAGES, the high school research and education program that Nerem considered one of his greatest legacies. He co-founded the program with Manu Platt, his former student and now one of the leading biomedical researchers in the nation, as well as a professor in the Coulter Department. Platt, who is director of Project ENGAGES, and the program manager, Lakeita Servance, told the ENGAGES story and introduced the day’s youngest speakers – Clinton Smith and Ayanna Prather, former ENGAGES students now headed to graduate school.

“I’m a little disappointed in my IBB family because no one warned me of how fierce a recruiter Dr. Nerem was,” Smith said, eliciting waves of laughter. “He started giving me this whole spiel about why I should come to Georgia Tech. A few months later, I was ready to submit my application and he was like, ‘so, you have your recommendation letters?’ I said to him, ‘um, about that …’”

He asked if Nerem would write a letter of recommendation for him.

“I can’t make this stuff up,” said Smith, who graduated from the Coulter Department this year. When he got back to his lab and had a moment to check email, there was a letter from Nerem, which he'd written months earlier, "the moment he knew that I was applying," Smith added.

Some of the speakers couldn’t finish what they were saying, because the emotions became too heavy. That was the effect Nerem had on the people close to him. His influence was profound. Most of the speakers mentioned something about Nerem’s love (and frequency) of travel, and his uncanny ability to find a McDonald’s restaurant (and his beloved Egg McMuffins) on almost any continent.

Except for a poster session, featuring the work of Project ENGAGES students, scientific research took a backseat to the scientific researcher – the person behind the work. Mostly, it was Nerem’s concern for fellow humans that kept coming up. University of Georgia researcher and professor Steve Stice recalled an unforgettable moment after his mother’s death, and a phone message that will stay with him forever. It arrived on Feb. 27, a week before Nerem died.

“I’ll never forget it. Bob left me a voice message that I will never erase,” Stice said. “He was calling me from his hospital bed to tell me how sorry he was to hear about my mother’s passing. He was thinking about me, during that time. Thinking of others. I called him back later and he wanted to talk to me about my grief and what was happening in my life, but nothing about what was happening to him. I’ve kept that message and listened to it from time to time, to keep it fresh in my mind, and try to remember what I aspire to be as a person.”

Fittingly, Nerem’s wife, constant travel partner, and occasional editor Marilyn Nerem, gave the final word before the official event gradually evolved into an after-hours celebration. And she saved the best for last – one of her husband’s rules of life, discovered after he had died. It’s Rule 21, the last one on the list. She found it in one of his coat pockets scribbled on a scrap of paper while cleaning out a closet.

“This is the rule,” she said. “Whatever you do, do something of service for someone else; then and only then will you know that it mattered that you were born.”

Then she recited Rule 20: “Life’s journey isn’t to arrive at the grave safely in a well-preserved body, but rather to skid in sideways, worn out, shouting – holy cow, what a ride,” adding, “it certainly has been a wonderful ride, and Bob loved each one of you.” 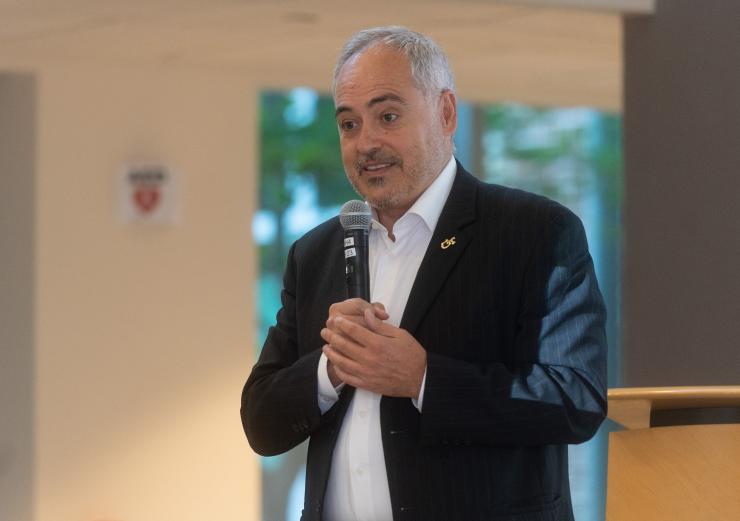 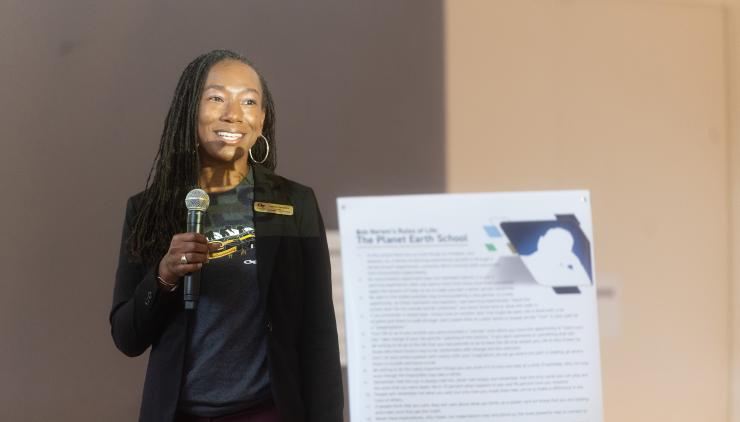 Lakeita Servance tells the story of Project ENGAGES. The high school science education program is one of Bob Nerem's legacies. 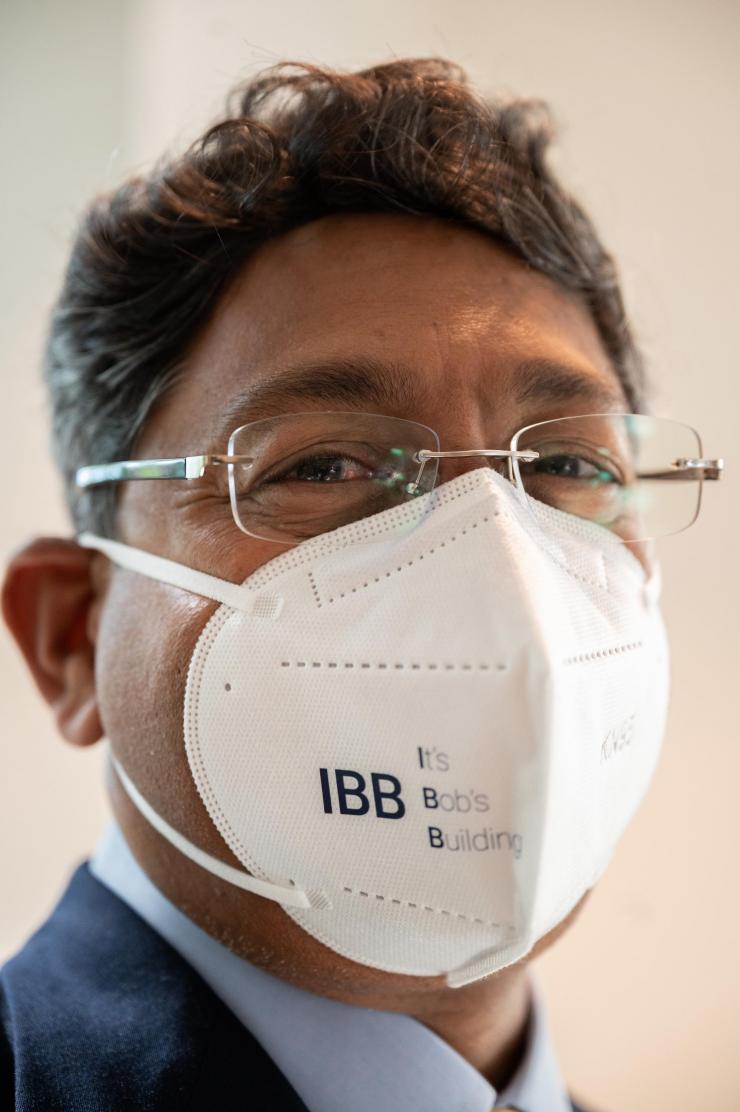 Emory provost and former chair of the Wallace H. Coulter Department of Biomedical Engineering Ravi Bellamkonda wears a mask that states plainly what everyone has been thinking for years: IBB stands for 'It's Bob's Building.' 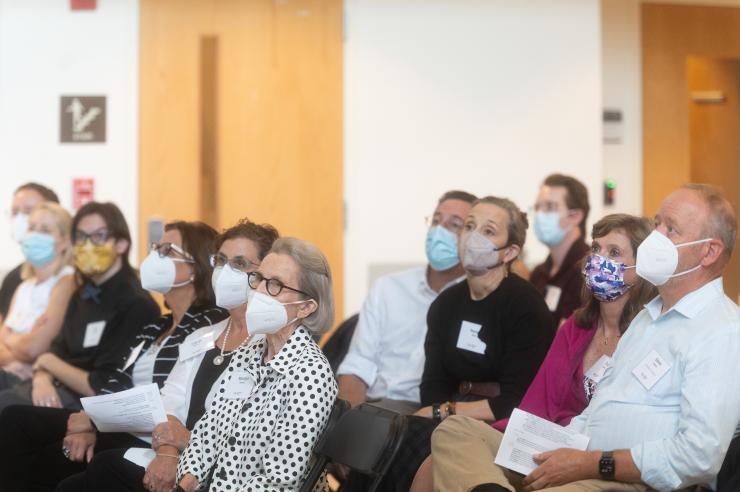 The Nerem family was well represented at the symposium.

Mentoring and Education: A Lifetime of Experience and Learning (by Roger Kamm) ASME Launches Nerem Medal (2017)