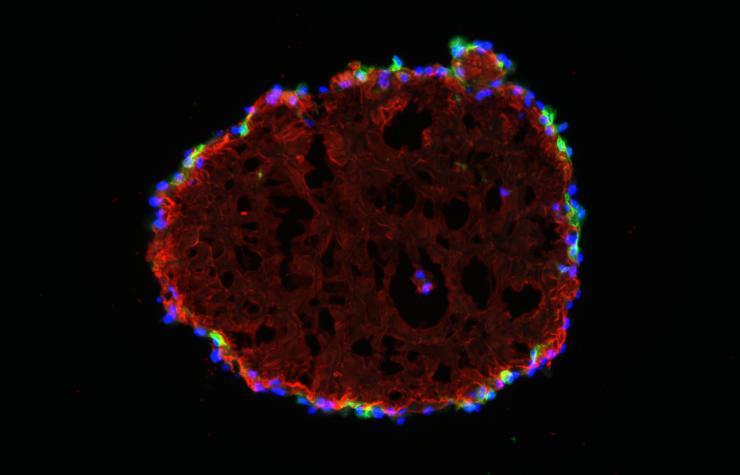 This proximal tubule organoid is 30 days old, and will survive at least another 60 days. The 90-days is a record for a drop culture of any kind.

About 15% of the U.S. population – some 37 million people – live with chronic kidney disease. But most of them don’t know they have it until the disease progresses to a later, serious stage. That’s because early on, there are few, if any, symptoms.

“Another big challenge is, even though kidney disease is so prevalent, it remains an understudied problem,” said biomedical engineer Eric Parigoris, a former Georgia Tech Ph.D. student who is working to change that.

A primary factor of kidney disease is proteinuria, or high levels of protein in the urine. It can be caused by temporary conditions like dehydration, intense exercise, or more serious problems, like diabetes, hypertension, chronic kidney disease, or a kidney disorder called nephrotic syndrome.

Parigoris and his colleagues in the lab of Shuichi Takayama, in collaboration with the Morehouse School of Medicine, have developed a new 3D model for studying proteinuric kidney disease: geometrically inverted proximal tubule organoids. These ‘tubuloids’ are an improvement on current in vitro methods while avoiding the cost and ethical concerns associated with animal studies. They explain their work in the November edition of the journal Biomaterials.

Organoids are artificially grown, simplified, mini versions of an organ produced in vitro, typically from donor stem cells. These complex, self-organized collections of cells can recapitulate the processes of a patient’s own tissues, making organoids powerful tools for studying drug interaction as well as tissue function and development. They represent a novel approach to personalized medicine.

Previously, Parigoris and his collaborators developed geometrically inverted organoids for studying breast cancer. That is, they made inside out organoids – the basolateral (exterior) and apical (interior) sides are reversed.

“The side of the cells that is exposed to protein is typically on the interior of the organoid, the apical side, and you can’t access it,” said Parigoris, lead author of the Biomaterials study. “So, when we flip these organoids, turn them inside out, that opens up the receptor that takes up protein, making it possible for us to study that process.”

Parigoris became so intrigued by the challenges involved in kidney disease that he shifted the focus of his Ph.D. from breast cancer to studying the body’s filtering plant. The kidneys remove wastes and extra fluid from your body, maintaining a healthy balance of water, salts, and minerals. Kidneys also make red blood cells and the hormones that help control blood pressure, and they keep your bones strong and healthy.

“There are a lot of mechanics at play in the kidney, like continuous fluid flow. My background is in mechanical engineering, so this became very exciting to me – that and the fact that there is still so much have to learn,” said Parigoris, who earned his Ph.D. in May, and is now a biomechanics associate in the Atlanta office of engineering and scientific consulting firm Exponent.

Studying and modeling proteinuric kidney disease meant finding new collaborators. The Takayama team found theirs at the Morehouse School of Medicine in collaboration with Xueying Zhao. Much of her research has focused on the molecular mechanisms at play when hypertension and diabetes cause kidney damage.

“This project was a great way to foster a new interdisciplinary collaboration, because we’re biomedical engineers, and she’s a kidney physiologist,” Parigoris said.

Zhao added, “I was grateful that the Takayama lab reached out – this is a great opportunity for my lab. We’re interested in what we can learn from studying kidney organoids, which let us observe natural functions very closely. I see this as a powerful new tool for further investigations, not only in kidney disease, but in other areas as well, where apical access is required.”

There haven’t been many organoid-based studies of proteinuria, “because you need apical access,” Parigoris said. “That’s where the uptake of protein happens, and that’s what we want to study.”

Tubuloids are specifically organoids for studying the kidney. Grown from donor kidney cells, tubuloids are made from cells that compose the nephron. Each kidney is made up of about a million multicellular filtering units called nephrons, and every nephron contains a long tubule. Hence, tubuloids.

These inside-out organoids come with an added bonus – they are long lived. That is, the tubuloids are produced and maintained in hanging drop cultures for more than 90 days.

The ability to keep them viable for 90 plus days allows researchers to closely observe a chronic condition, Parigoris said. “The idea is, we would be able to expose the organoid to, say, a high protein level for 90 days, or a particular drug for 90 days, and study what happens.”

Going forward, Parigoris sees great potential for the organoid technology developed in Takayama’s lab. For example, he said, these inside-out tubuloids could be very useful in nephrotoxicity testing.

“We know that certain antibiotics and chemotherapy drugs are known to be toxic to the kidneys,” said Parigoris, who used to volunteer at the Winship Cancer Institute of Emory, assisting patients undergoing chemotherapy. “Some of these drugs have been implicated with apical uptake. So that is a likely future direction for these inside-out tubuloid studies.”