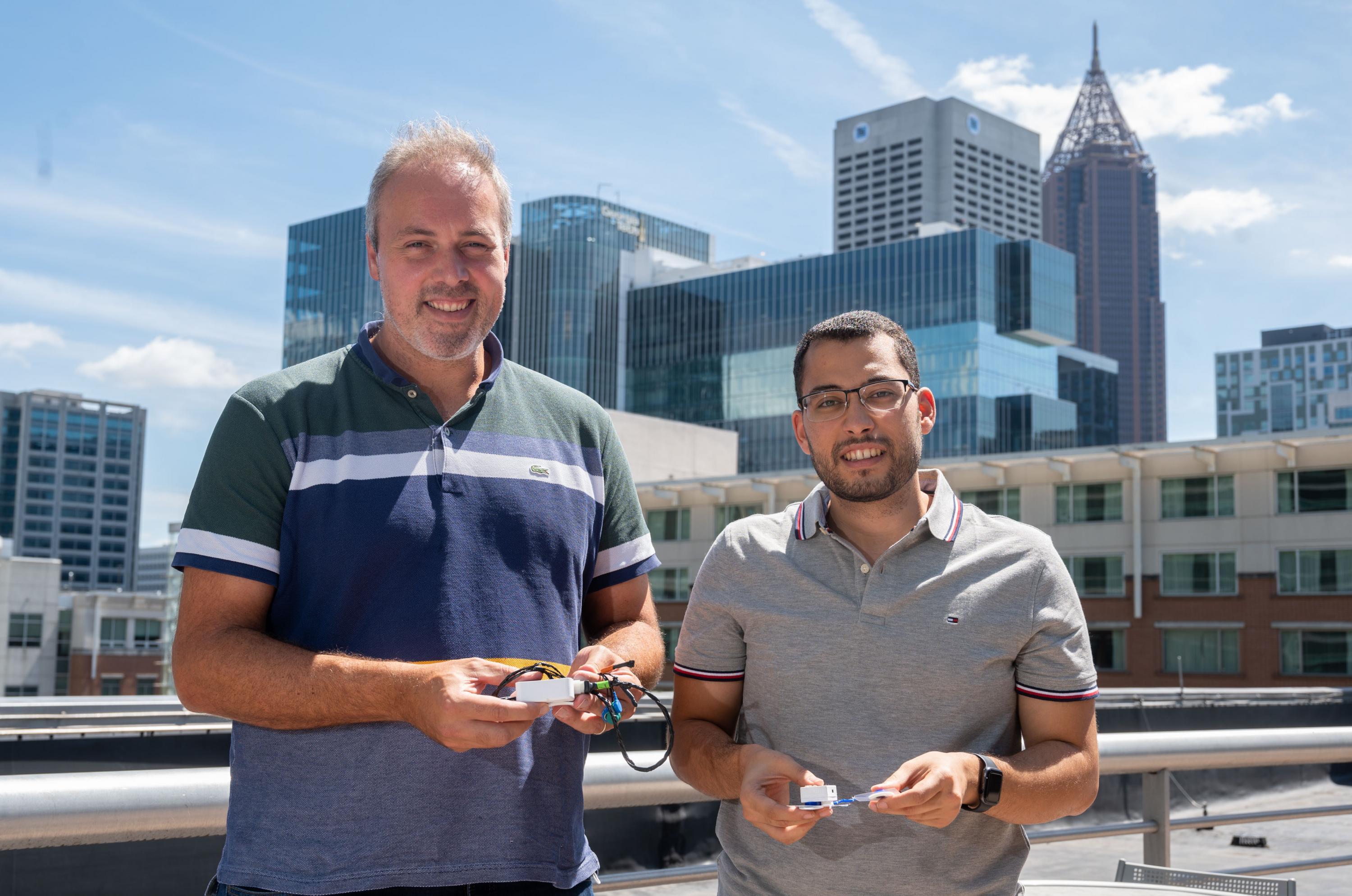 Samer Mabrouk and Omer Inan hold prototypes of their device.

Long before Samer Mabrouk obtained his current position as a postdoctoral scholar at Georgia Tech, he had developed a fear of hospitals: the sickness and disease, the pain. When he was growing up in Egypt, there were several instances where he declined to accompany his relatives to the hospital. But in the last four years, he’s become a regular visitor of Children’s Healthcare of Atlanta (Children’s) Egleston Hospital. It’s been a little uncomfortable, but it’s been worth it.

Since January 2020, he and a team of clinicians and nurses from Children’s have been running a pilot study on a new biomedical safety device they’ve developed. Their device monitors for important safety issues that can occur during intravenous (IV) therapy, the process of delivering liquids or medicines through a needle directly into a patient’s veins.

Their initial results have shown that the device has the potential to significantly improve IV safety. It also stands to reduce the workload on nurses, who must manually monitor for IV safety issues.

“Our stretch goal is that it might be used on every IV site,” said Omer Inan, Linda J. and Mark C. Smith Chair and associate professor in the School of Electrical and Computer Engineering at Georgia Tech, who has guided Mabrouk on the project. Children’s lists checking IVs as a priority “quality initiative”, a vital task for ensuring high-quality patient care.

Now, the team is raising funds to move to the next phase of device development. This will consist in a formal clinical trial to support application for Food and Drug Administration (FDA) 510k clearance. If the trial is successful, the team will be able to commercialize the device and clinicians will be able to use the technology in real clinical practice.

Research began in 2014, when a nurse, Lynn Pogue from Children’s, approached an engineer, Leanne West from Georgia Tech, to discuss the problem of IV monitoring. Sherry Farrugia, the chief executive officer of the Global Center for Medical Innovation (GCMI), put Pogue and West in touch with Inan, then a new faculty member. Inspired by Pogue’s input, the Tech team began an investigation.

After an IV needle has been inserted into a vein, there are various factors that can cause it to leak, either just beneath the skin or even deeper, into surrounding tissues. This painful process of unintended leakage is called infiltration. In a related process called extravasation, the leakage of certain medicines like chemotherapeutic drugs directly causes tissue damage. Nurses are trained to catch these events before harm occurs, but mild cases of clinically insignificant infiltration are thought to happen with surprising frequency, at rates ranging from 23 to 87% in children.

To check for issues, the standard nursing procedure is to touch, visually inspect, and compare the IV site to the same location on the other arm. Frequent checks are often needed, posing a substantial burden on nurses. Young children rely completely on checks as they may be unable to indicate when they are experiencing pain. In the absence or failure of such checks, severe infiltration injuries have been recorded, particularly in babies and small children.

As Inan began to think about solutions for IV infiltration monitoring, a few ideas came to mind. For a different, Department of Defense-funded project, he had already been investigating how to monitor knee swelling with bioimpedance sensors, which measure the effects on a weak electric current when it is passed through the body. Both knee swelling and IV infiltration involve a similar issue of fluid accumulation under the skin.

Bioimpedance has long been used for a variety of sensing applications, like measuring body fat percentage, but the underlying technology is complex, Inan said. When an alternating current passes through tissues, the signal changes, reflecting various sorts of physiological characteristics such as fluid content.

Inan and Mabrouk considered a few other potential sensing modalities but, after conducting a preclinical study at T3 Labs (GCMI), determined that measuring changes in bioimpedance would be their primary method. After developing the prototype for the study, the next step was to move to testing on humans.

Human studies would require a great deal of care, particularly given that people who are undergoing IV therapy are already at risk. Moreover, the researchers sought to test the technology on children, specifically, who have the highest risk for IV infiltration due to the small size of their veins.

Mabrouk and Inan worked with Patrick Strane, an engineer at GCMI, to figure out how to prepare the device for human testing. After analyzing the device, they decided to make improvements to its packaging, which made it safer for children and more resilient to stringent hospital cleaning standards.

The current setup of the device is a set of four electrodes connected to an iPod-sized electronics hub. A doctor or nurse places two of these electrodes above the IV site on the arm and two below. The hub contains the computing hardware and sensor circuitry that delivers and processes the bioimpedance signal.

Since the pilot study began, pediatric cardiac intensivist Zahidee (Saidie) Rodriguez has led the patient testing. Initial deployments identified a few unexpected challenges. Although small, the size of the device makes it ungainly for babies. Toddlers often kick and tear the device off their arms, and older children are little easier. They dislike having one more thing attached to them when they are bored, bedbound, and sick.

“That was a good learning experience,” Rodriguez said. “That was very humbling,”

But when patients wear it, the device has proven its capability. In the 60 patients that the researchers have monitored, nurses have manually detected two overt infiltrations, logging them in the patients’ electronic healthcare records. Retrospective analysis of the sensor data taken from these patients shows that infiltrations were indeed happening, according to Mabrouk and Rodriguez, confirming the device’s ability to detect the events.

More notably, data has revealed three other “subclinical” infiltrations that were not formally documented. These were infiltrations that were too minor for nurses to detect by the standard physical and visual inspection methods. However, in each case, the patient, nurse, or doctor had taken action to address minor pain, IV leakage, or IV occlusion, where the IV reports that it is not delivering medicine at the correct rate. Afterwards, data from the devices provided clear evidence that minor infiltrations were in fact occurring in these cases.

“It certainly seems like it's much more sensitive than what the human touch and eye can pick up on,” said Rodriguez.

Mabrouk and Inan are using the data from the current study to help optimize the device’s algorithms so that it will be able to automatically detect infiltration events as they happen. This is a difficult problem, they said, particularly when trying to achieve high accuracy and a low false positive rate.

“When somebody rotates their arm, the bioimpedance of the arm changes by 20 to 30 percent,” said Inan. “How do you know the difference between that and infiltration? Our approach to that was using multiple different sensors.”

Mabrouk says that a full clinical trial will be critical for establishing safety and effectiveness. Rodriguez hopes that the trial will also help the team test the device on more patients, more efficiently.

The researchers are currently collaborating with GCMI to move to a clinical trial, with the ultimate goal of FDA clearance. If obtained, it looks possible for the device to become widely adopted. But before they get to that point, the researchers plan to make a variety of improvements, including the addition of wireless connectivity and the achievement of further miniaturization.

As for Mabrouk, although he still has qualms about visiting the hospital, he plans to keep going.

“The first time we saw the data from the infiltrated patient and how it looked, it was clear, yeah, this works,” Mabrouk said. “This is going to work.” 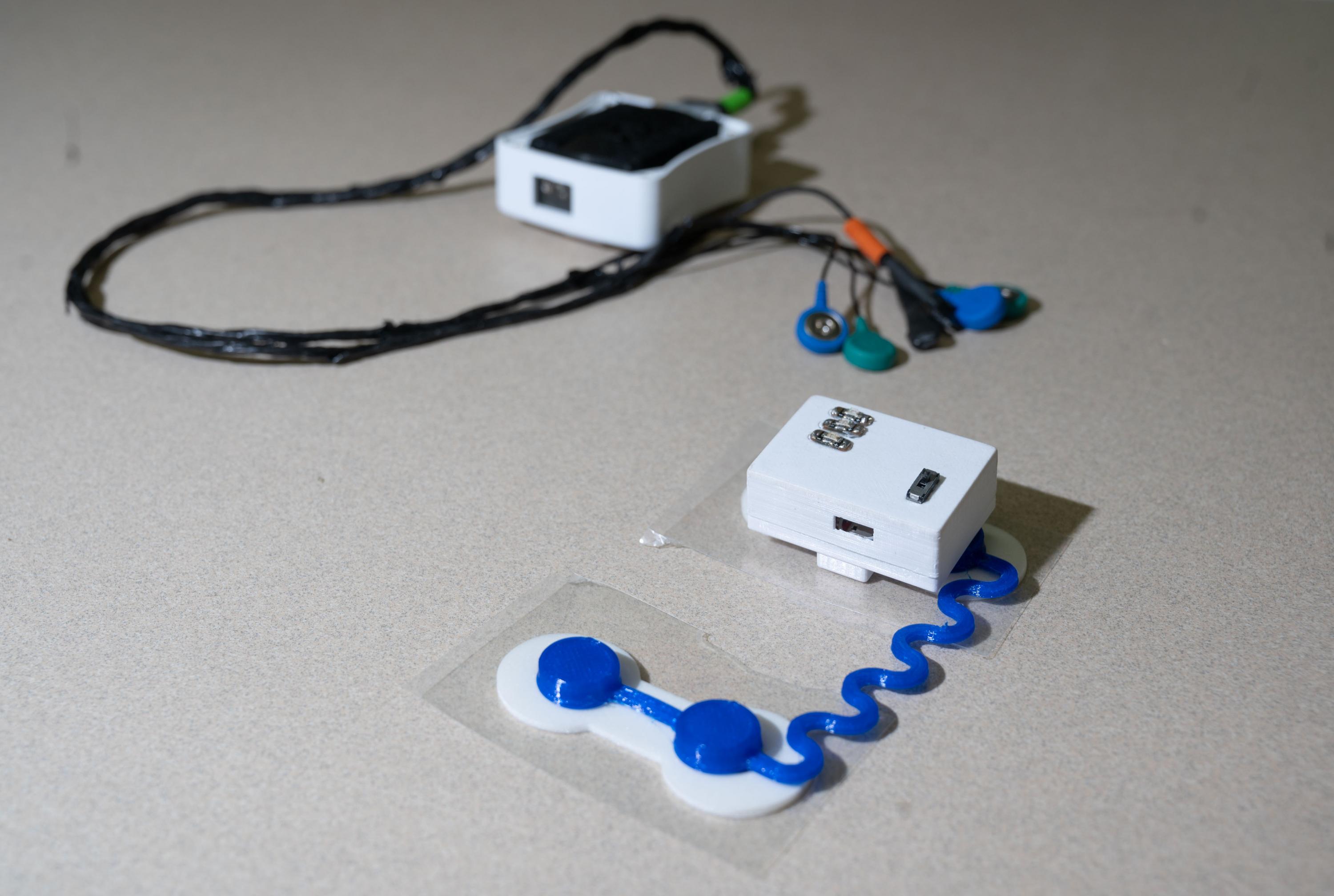 Prototypes of the biompedance sensor for IV safety monitoring. 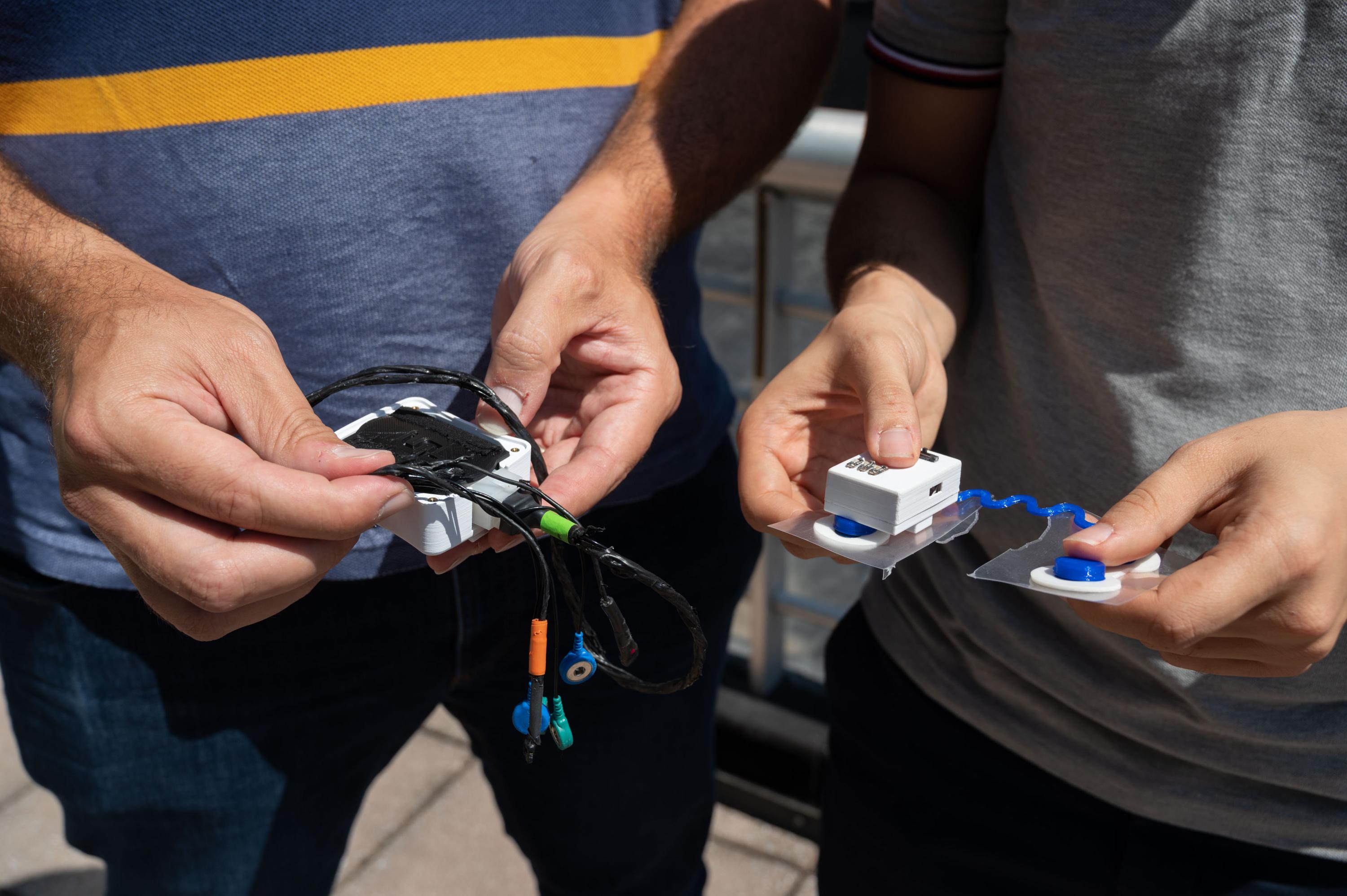