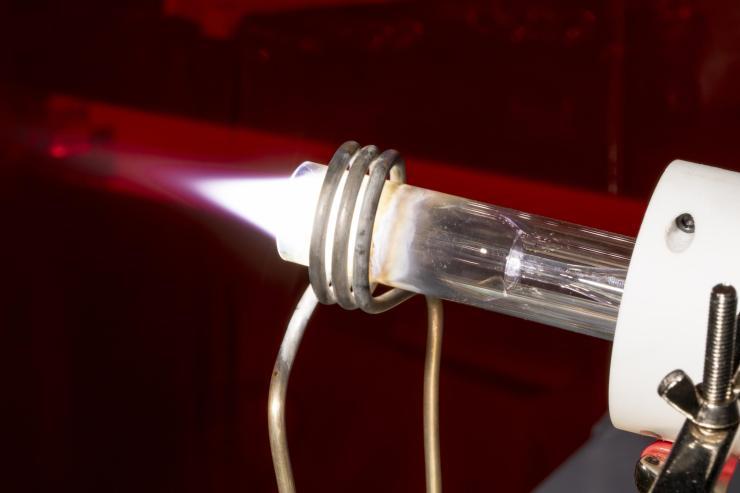 As part of research to evaluate CubeSats as airborne testbeds for technologies that are being developed for future generations of hypersonic vehicles, GTRI researchers developed this plasma source to produce high temperatures. (Credit: Sean McNeil, GTRI).

Miniature satellites known as CubeSats are taking on larger roles in space missions that might previously have been carried out by more expensive conventional spacecraft. Now, researchers at the Georgia Institute of Technology are envisioning a still larger mission for CubeSats as airborne testbeds for technologies that are being developed for future generations of hypersonic vehicles.

The development of hypersonic vehicles able to travel through the Earth’s atmosphere at Mach 5 or faster – five times the speed of sound – is attracting substantial new government and industry funding. But test facilities needed to evaluate thermodynamic, aerodynamic, acoustic, and other issues critical to operating in that harsh environment are limited, in high demand, and costly to use.

Georgia Tech researchers want to eliminate that roadblock by building hardened CubeSats that could use re-entry from space to generate the conditions needed to evaluate hypersonic technologies. The small satellites, with their key systems protected from the heat of re-entry, would be launched into the upper atmosphere from the International Space Station or a “rideshare” rocket to provide several minutes of testing at velocities of up to Mach 25.

“We are looking at the feasibility of building what would be an inexpensive flying wind tunnel,” said Krish Ahuja, Regents Professor of Aerospace Engineering and division chief for aerospace and acoustics in the Aerospace, Transportation, and Advanced Systems Laboratory of the Georgia Tech Research Institute (GTRI) and the project’s principal investigator. “We could gather pretty much any data that would be needed for hypersonic research and provide a new way to conduct studies that now can be quite difficult to do.”

Based on a six-month feasibility study that included collaborators from Georgia Tech’s School of Aerospace Engineering and two private companies, Ahuja believes it would be worthwhile to pursue design of a 6U test vehicle to evaluate the concept. (A 6U CubeSat is about the size of the system unit of a desktop computer). If that proves promising, larger vehicles could be constructed with more capable instrumentation, guidance, and even propulsion.

The goal of the project’s first year is to understand what would be required to develop and launch the flying testbeds – and recover them after flight. Design and development of the new test vehicles must overcome significant challenges related to controlling the flight duration, speed, altitude, and orientation of the vehicle during data collection. Systems to communicate with the ground and track the vehicle’s trajectory must also be developed. Also, part of the first-year goal is creating a roadmap showing the development and test process.

“Ongoing work will include a ‘system-of-systems’ analysis of the concept to model its performance and interaction with other support systems to assess its capability to conduct scientific research,” Ahuja said. “Our initial calculations indicate that a 6U CubeSat could be hardened with a thermal protection system for hypersonic conditions to help conduct limited feasibility experiments. This will be a building block for future systems that would be larger and able to conduct the testing we envision.”

Initial testing is likely to involve free fall of the test vehicle, but subsequent tests would include control surfaces that would provide steering to prevent tumbling and other undesired effects. Multiple CubeSats could also be operated together.

CubeSats, so-called because they are designed in standard cube sizes, aren’t normally designed to be recovered after a mission; when their work is done, they simply burn up in the atmosphere. Because Ahuja wants to study effects on materials and capture data from onboard instruments, the flying wind tunnel satellites will need to be recovered using parachutes that would drop them into a recovery zone, perhaps in the desert Southwest.

“Getting them down at the right location will require good guidance and control, good telemetry, and a propulsion system,” he said. “The challenge will be to make these very small and inexpensive. To get the information we need, we will have to bring the testbed safely to the ground.”

The high temperatures generated by re-entry into the Earth’s atmosphere could be useful for more than simulating hypersonic conditions. Ahuja believes the heat could be used to operate a proprietary device that could provide steering for the CubeSats, which normally don’t have propulsion systems.

Much of current research on hypersonic flight depends on data from computational fluid dynamics simulations, which need validation from testing. Beyond the information gained from the testbed, Ahuja believes the small spacecraft could make big contributions by providing a real-world anchor for the analysis tools that researchers are using for a variety of hypersonic vehicles.

A New Approach to Hypersonic Testing is Needed

Hypersonic testing is typically done in short-duration wind tunnels or high-temperature testbeds, meaning high-speed and high-temperature conditions are difficult to achieve simultaneously and at test durations relevant to hypersonic vehicles. In addition, there are few existing facilities where such testing can be done, and they are in high demand. The new testbed is expected to provide about three minutes of testing per flight.

Currently, there is a critical need to understand how much and what kind of thermal protection system is needed to protect hypersonic vehicles at high velocities where friction can produce temperatures of more than 4,000 degrees F. Additionally, there are questions about acoustic effects and how uneven heating will spread across a vehicle and potentially damage its structure.

“The airflow across a hypersonic vehicle can be both turbulent and laminar, different on different parts of the vehicle,” said Ahuja. “These wide variations of the flow properties can produce large variations in temperatures over the vehicle surface, which is highly undesirable with respect to the vehicle’s structural integrity. As such, we need to understand what is happening to the material as a result of temperature changes over time. This thermal loading cannot be studied in conventional wind tunnels, which normally offer fractions of seconds of run time at hypersonic conditions, because it takes a while for those conditions to become steady.”

Acoustic loading can also dramatically affect the structural integrity of a hypersonic vehicle, and that likewise requires time to evaluate. “Acoustic loading of the kind that could generate a crack in a structure that develops over time,” he said. “We could create and study these conditions with our flying testbed.”

Funding from GTRI’s Independent Research and Development (IRAD) program has supported the initiative so far, and by gathering enough data from the initial studies, Ahuja hopes to attract collaborators to help implement the new test approach.

“There is so much enthusiasm for this that I believe our chances of success are high,” he said. “By launching from another space system, we won’t have to worry about the initial launch propulsion. This could address a lot of challenges in conducting hypersonic research.”

About GTRI: The Georgia Tech Research Institute (GTRI) is the nonprofit, applied research division of the Georgia Institute of Technology (Georgia Tech). Founded in 1934 as the Engineering Experiment Station, GTRI has grown to more than 2,900 employees, supporting eight laboratories in over 20 locations around the country and performing more than $800 million of problem-solving research annually for government and industry. GTRI's renowned researchers combine science, engineering, economics, policy, and technical expertise to solve complex problems for the U.S. federal government, the state, and industry. For more information, please visit www.gtri.gatech.edu.