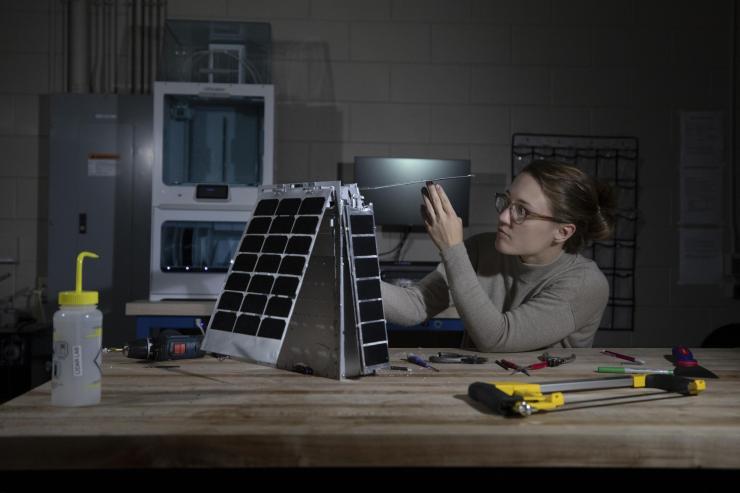 The Lunar Flashlight is small for a satellite, but could be big for research.

NASA plans to launch Lunar Flashlight, a small satellite (SmallSat) about the size of a briefcase that will use lasers to search for water ice inside craters at the Moon’s unexplored South Pole.

NASA says that the Lunar Flashlight, traveling aboard a SpaceX Falcon 9 rocket, will take about three months to reach its “science orbit.” The launch itself has been delayed: SpaceX has pushed back the launch several times. Currently, it is expected to launch later this month.

The work on earth leading up to the launch has already taken quite some time.

Seasoned researchers were assisted by students in their efforts.

One such student is Mary Kate Broadway, a student assistant in GTRI’s Electro-Optical Systems Laboratory (EOSL), whose academic and professional experiences in modeling and fabrication were called upon to create a near 1:1 model of the Lunar Flashlight SmallSat.

Broadway, who is pursuing a bachelor’s degree in mechatronics, robotics, and automation engineering at Kennesaw State University, used GTRI’s SEEDLab makerspace to fashion the model based on designs produced by NASA.

“I got the SolidWorks (a popular solid modeling computer-aided design and computer-aided engineering application) file, and then I started by taking all the SolidWorks parts, making the 3D printables, and then exporting them out as ‘.stl’ files. Here (at the SEEDLab), I queued everything up and printed it,” Broadway explains. She did “all of the painting and the printing” by herself. "However, of course, the SEEDLab helpers (student assistants) all helped me whenever I had trouble.”

Broadway, who already has a BFA in animation and digital arts from Florida State University, has the savvy to make use of the SEEDLab’s wide variety of equipment.

Broadway employed traditional materials such as PET and PLA plastics for some of the more intricate parts of the model. The main body of the model is aluminum, which Broadway collaborated with the Aero Maker Space on the Georgia Tech campus to get pressed and fashioned to specifications with a Waterjet cutting machine. To simulate working solar panels, Broadway designed printed vinyl labels.

As of Nov. 4, just days before the Lunar Flashlight launch, Broadway was still engrossed in making final adjustments to the model, particularly the tight tolerances of its solar arrays. Broadway began working on the Lunar Flashlight project in April. Working part-time at the SEEDLab, she has spent dozens of hours—amounting to about a month of work--perfecting the device.