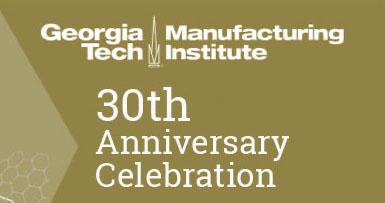 At the event, Wang stressed the need for building a strong manufacturing base in the United States. “Technology-based innovation is the dominant driver of economic growth in the 21st century,” said Wang. “Our national security, high standard of living, and the rebuilding of the middle class all depend on a maintaining a strong manufacturing base.”

During his introductory remarks, Wang presented a short GTMI 30th anniversary video which can be viewed here.

The 30th anniversary event briefly highlighted the research being done in GTMI’s Advanced Manufacturing Pilot Facility (AMPF). Both Boeing and Delta Airlines have made significant investments to be part of AMPF. This innovative facility allows faculty, students, and industry partners to work with emerging technologies to research new ideas and solve industry problems, and the facility is designed to be flexible with the ability to evolve as new technologies become available.

An introduction to the AMPF facility can be viewed here.

Capping off the 30th celebration event was GTMI’s annual distinguished lecture which was delivered by Naveed Hussain, chief technology officer, vice president and general manager of Boeing research and technology. Hussain presented an overview of the Boeing company, emphasized the value of the Georgia Tech-Boeing partnership, and discussed the future of manufacturing at Boeing.

A full recording of GTMI’s 30th anniversary event, a more in-depth look at AMPF, and the distinguished lecture delivered by Naveed Hussain can be found here.