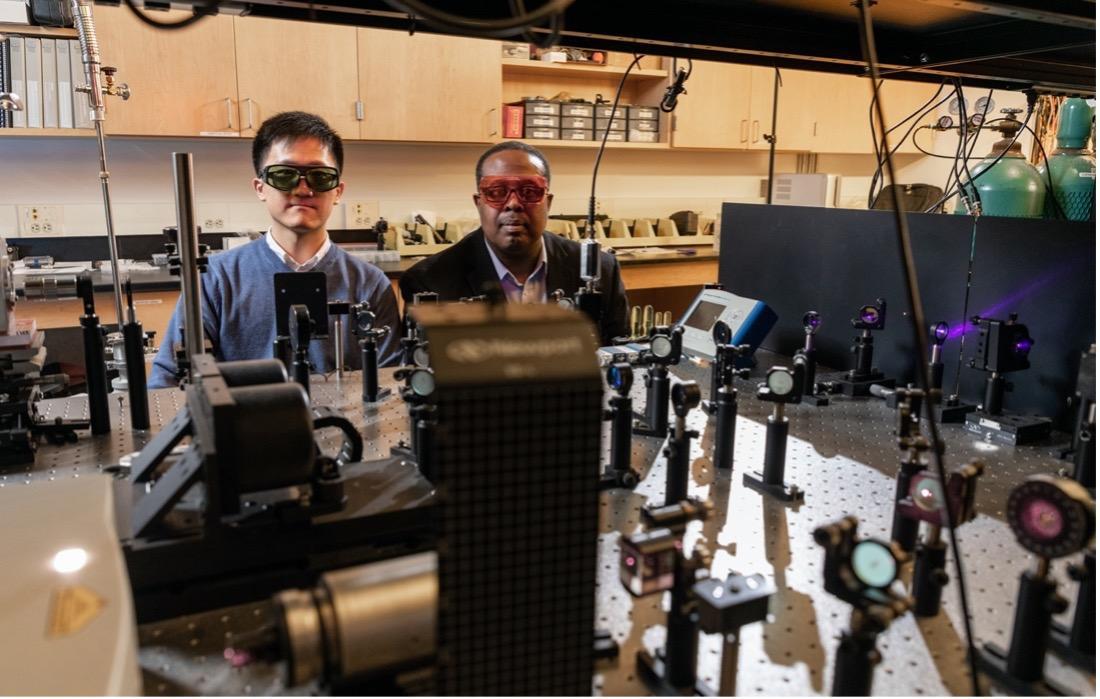 When cell phones, electric vehicle chargers, or other electronic devices get too hot, performance degrades, and eventually overheating can cause them to shut down or fail. In order to prevent that from happening researchers are working to solve the problem of dissipating heat produced during performance. Heat that is generated in the device during operation has to flow out, ideally with little hinderance to reduce the temperature rise. Often this thermal energy must cross several dissimilar materials during the process and the interface between these materials can cause challenges by impeding heat flow.

A new study from researchers at the Georgia Institute of Technology, Notre Dame, University of California Los Angeles, University of California Irvine, Oak Ridge National Laboratory, and the Naval Research Laboratory observed interfacial phonon modes which only exist at the interface between silicon (Si) and germanium (Ge). This discovery, published in the journal Nature Communications, shows experimentally that decades-old conventional theories for interfacial heat transfer are not complete and the inclusion of these phonon modes are warranted.

“The discovery of interfacial phonon modes suggests that the conventional models of heat transfer at interfaces which only use bulk phonon properties are not accurate,” said the Zhe Cheng, a Ph.D. graduate from Georgia Tech’s George W. Woodruff School of Mechanical Engineering who is now a postdoc at University of Illinois at Urbana-Champaign (UIUC). “There is more space for research at the interfaces. Even though these modes are localized, they can contribute to thermal conductance across interfaces.”

The discovery opens a new pathway for consideration when engineering thermal conductance at interfaces for electronics cooling and other applications where phonons are majority heat carriers at material interfaces.

“These results will lead to great progress in real-world engineering applications for thermal management of power electronics,” said co-author Samuel Graham, a professor in the Woodruff School of Mechanical Engineering at Georgia Tech and new dean of engineering at University of Maryland. “Interfacial phonon modes should exist widely at solid interfaces. The understanding and manipulation of these interface modes will give us the opportunity to enhance thermal conductance across technologically-important interfaces, for example, GaN-SiC, GaN-diamond, β-Ga2O3-SiC, and β-Ga2O3-diamond interfaces.”

The researchers observed the interfacial phonon modes experimentally at a high-quality Si-Ge epitaxial interface by using Raman Spectroscopy and high-energy resolution electron energy-loss spectroscopy (EELS). To figure out the role of interfacial phonon modes in heat transfer at interfaces, they used a technique called time-domain thermoreflectance in labs at Georgia Tech and UIUC to determine the temperature-dependent thermal conductance across these interfaces.

They also observed a clean additional peak showing up in Raman Spectroscopy measurements when they measured the sample with Si-Ge interface, which was not observed when they measured a Si wafer and a Ge wafer with the same system. Both the observed interfacial modes and thermal boundary conductance were fully captured by molecular dynamics (MD) simulations and were confined to the interfacial region as predicted by theory.

“This research is the result of great team work with all the collaborators,” said Graham.  “Without this team and the unique tools that were available to us, this work would not have been possible.”

Moving forward the researchers plan to continue to pursue the measurement and prediction of interfacial modes, increase the understanding of their contribution to heat transfer, and determine ways to manipulate these phonon modes to increase thermal transport. Breakthroughs in this area could lead to better performance in semiconductors used in satellites, 5G devices, and advanced radar systems, among other devices.

The epitaxial Si-Ge samples used in this research were grown at the U.S. Naval Research Lab. The TEM and EELS measurements were done at University of California, Irvine and Oak Ridge National Labs. The MD simulations were performed by the University of Notre Dame. The XRD study was done at UCLA.

About Georgia Institute of Technology