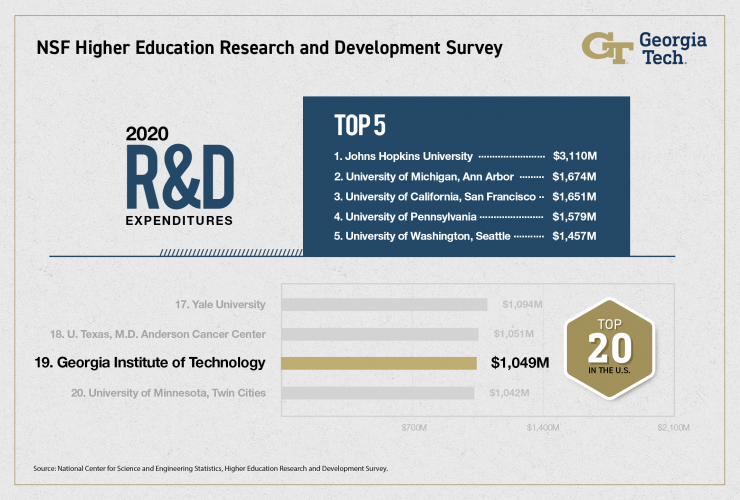 The top U.S. universities for research and development expenditures for fiscal year 2020

The Georgia Institute of Technology has broken into the top 20 in higher education research and development spending for the first time in a decade. The ranking, based on an annual survey conducted by the National Science Foundation (NSF), reflects a year of innovations in healthcare, computing, and sustainability research — even amidst a global pandemic.

Georgia Tech placed among top R1 or research-intensive universities, such as Johns Hopkins University, which ranked No. 1 (with $3.110 billion in expenditures), and Harvard University, which rounded out the top 10 (with $1.240 billion in expenditures). Georgia Tech was the only technological university to place in the top 20 and had the second highest year-to-year growth, behind Texas A&M University. A top 20 ranking is particularly significant, as Georgia Tech achieved it without a medical school. Nationally, medical schools account for a quarter of all research expenditures.

"Georgia Tech is proud of our continued growth and to be listed among the nation’s top institutions in research and development spending,” said Chaouki T. Abdallah, executive vice president for Research at Georgia Tech. “Our research enterprise represents an unparalleled diversity of talent, perspective, and expertise committed to conducting research that matters — research driven by a commitment to public service, with the goals of advancing science, technologies, and policies that solve problems, address societal challenges, accelerate economic development, and improve people’s lives."

Overall, higher education research spending totaled $86.4 billion, with the top 30 universities contributing 42% to the total amount. The NSF gathered this data from 915 universities in the Higher Education Research and Development Survey, sponsored by the National Center for Science and Engineering Statistics within the NSF.

Georgia Tech’s research spending benefits more than just groundbreaking discoveries made in the lab; it also helps the state of Georgia. In the same year, Georgia Tech secured $4 billion in economic impact, according to data recently released by the University System of Georgia. Research spending at Georgia Tech contributes to everything from agricultural innovations, like using robots for peach orchards and poultry houses, to sensors that monitor coastal sea level rise in Savannah.