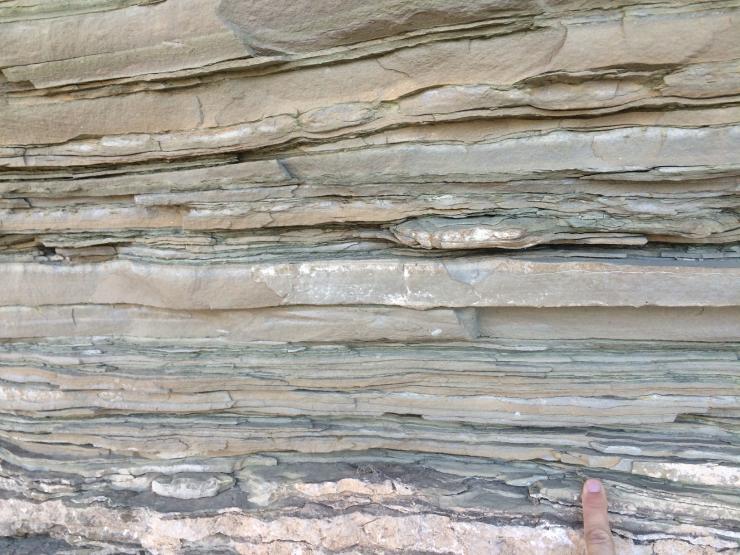 Close-up view of layered sedimentary rocks representative of those used in this study. Each layer records a snapshot of the Earth system over millions to billions of years. Credit: Georgia Tech / Yale - Reinhard / Planavsky

For three billion years or more, the evolution of the first animal life on Earth was ready to happen, practically waiting in the wings. But the breathable oxygen it likely required wasn’t there, and a lack of simple nutrients may have been to blame.

Then came a fierce planetary metamorphosis. Roughly 800 million years ago, in the late Proterozoic Eon, phosphorus, a chemical element essential to all life, began to accumulate in shallow ocean zones near coastlines widely considered to be the birthplace of animals and other complex organisms, according to a new study by geoscientists from the Georgia Institute of Technology and Yale University.

Along with phosphorus accumulation came an oceanic chemical chain reaction, which included other nutrients, that powered organisms to pump oxygen into the atmosphere and waters. Shortly after that transition, which in geohistorical terms can mean about 100 million years, waves of climate extremes swept the globe, freezing it over twice for tens of millions of years each time, a highly regarded theory holds.

After billions of years, during which life consisted almost entirely of single-celled organisms, animals evolved. At first, they were extremely simple, resembling today’s sponges or jellyfish, but Earth was on its way from being, for eons, a planet less than hospitable to complex life to one bursting with it.

In the last few hundred million years, biodiversity has blossomed, leading to dense jungles and grasslands echoing with animal calls, and waters writhing with every shape of fin and color of scale. And most every stage of development has left its mark on the fossil record.

The researchers are careful not to imply that phosphorous necessarily caused the chain reaction, but in sedimentary rock taken from coastal areas, the nutrient has marked the spot where that burst of life and climate change took off. “The timing is definitely conspicuous,” said Chris Reinhard, an assistant professor in Georgia Tech’s School of Earth and Atmospheric Sciences.

Reinhard and Noah Planavsky, a geochemist from Yale University, who headed up the research together, have mined records of sedimentary rock that formed in ancient coastal zones, going down layer by layer to 3.5 billion years ago, to compute how the cycle of the essential fertilizer phosphorus evolved and how it appeared to play a big part in a veritable genesis.

They noticed a remarkable congruency as they moved upward through the layers of shale into the time period where animal life began, in the late Proterozoic Eon.

“The most basic change was from very limited phosphorous availability to much higher phosphorus availability in surface waters of the ocean,” Reinhard said. “And the transition seemed to occur right around the time that there were very large changes in ocean-atmosphere oxygen levels and just before the emergence of animals.”

Phosphorus at the beach

Reinhard and Planavsky, together with an international team, have proposed that a scavenging of nutrients in an anoxic (nearly O2-free) world stunted photosynthetic organisms that otherwise had been poised for at least two billion years to make stockpiles of oxygen. Then that balanced system was upset and oceanic phosphorus made its way to coastal waters.

The scientists published their findings in the journal Nature on Wednesday, December 21, 2016. Their research was funded by the National Science Foundation, the NASA Astrobiology Institute, the Sloan Foundation and the Japan Society for the Promotion of Science.

The work provides a new view into what factors allowed life to reshape Earth’s atmosphere. It helps lay a foundation that scientists can apply to make predictions about what would allow life to alter exoplanets' atmospheres, and may inspire deeper studies, here on Earth, of how oceanic-atmospheric chemistry drives climate instability and influences the rise and fall of life through the ages.

Cyanobacteria, the mother of O2

Complex living things, including animals, usually have an immense metabolism and require ample O2 to drive it. The evolution of animals is unthinkable without it.

The path to understanding how a nutrient dearth would starve out breathable oxygen production leads back to a very special kind of bacteria called cyanobacteria, the mother of oxygen on Earth.

“The only reason we have a well-oxygenated planet we can live on is because of oxygenic photosynthesis,” Planavsky said. “O2 is the waste product of photosynthesizing cells, like cyanobacteria, combining CO2 and water to build sugars.”

And photosynthesis is an evolutionary singularity, meaning it only evolved once in Earth’s history – in cyanobacteria.

Some other biological phenomena evolved repeatedly in dozens or hundreds of unrelated incidences across the ages, such as the transition from single-celled organisms to rudimentary multicellular organisms.  But scientists are confident that oxygenic photosynthesis evolved only this one time in Earth’s history, only in cyanobacteria, and all plants and other beings on Earth that photosynthesize coopted the development.

Cyanobacteria are credited with filling Earth’s atmosphere with O2, and they’ve been around for 2.5 billion years or more.

That begs the question: What took so long? Basic nutrients that fed the bacteria weren’t readily available, the scientist hypothesize. The phosphorus, which Planavsky and Reinhard specifically tracked, was in the ocean for billions of years, too, but it was tied up in the wrong places.

For eons, the mineral iron, which once saturated oceans, likely bonded with phosphorous, and sank it down to dark ocean depths, far away from those shallows -- also called continental margins -- where cyanobacteria would have needed it to thrive and make oxygen. Even today, iron is used to treat waters polluted with fertilizer to remove phosphorous by sinking it as deep sediment.

The researchers also used a geochemical model to show how a global system with high iron concentration and low phosphorus availability combined with low nitrogen availability in ocean shallows could perpetuate itself in a low-oxygen world.

“It looks to have been such a stable planetary system,” Reinhard said. “But it’s obviously not the planet we live on now, so the question is, how did we transition from this low-oxygen state to where we are now?”

What ultimately caused that change is a question for future research.

But something did change about 800 million years ago, and cyanobacteria and other minute organisms in continental margin ecosystems got more phosphorus, the backbone of DNA and RNA, and a main actor in cell metabolism. The bacteria became more active, reproduced more quickly, ate lots more phosphorus and made loads more O2.

“Phosphorus is not only essential for life,” Planavsky said. “What’s implicit in all this is: It can control the amount of life on our planet.”

When the newly multiplied bacteria died, they fell to the floor of those ocean shallows, stacking up layer by layer to decay and enrich the mud with phosphorus. The mud eventually compressed to stone.

“As the biomass increased in phosphorus content, the more of it landed in layers of sedimentary rock,” Reinhard said. “To scientists, that shale is the pages of the sea floor’s history book.”

Scientists have thumbed through them for decades, compiling data. Planavsky and Reinhard analyzed some 15,000 rock records for their study.

“The first compilation we had of this was only 600 samples,” Planavsky said. Reinhard added, “But you could already see it then. The phosphorus jolt was as clear as day. And as the database grew in size, the phenomenon became more entrenched.”

That first signal of phosphorus in Earth’s coast shallows pops up in the shale record like a shot from a starting pistol in the race for abundant life. 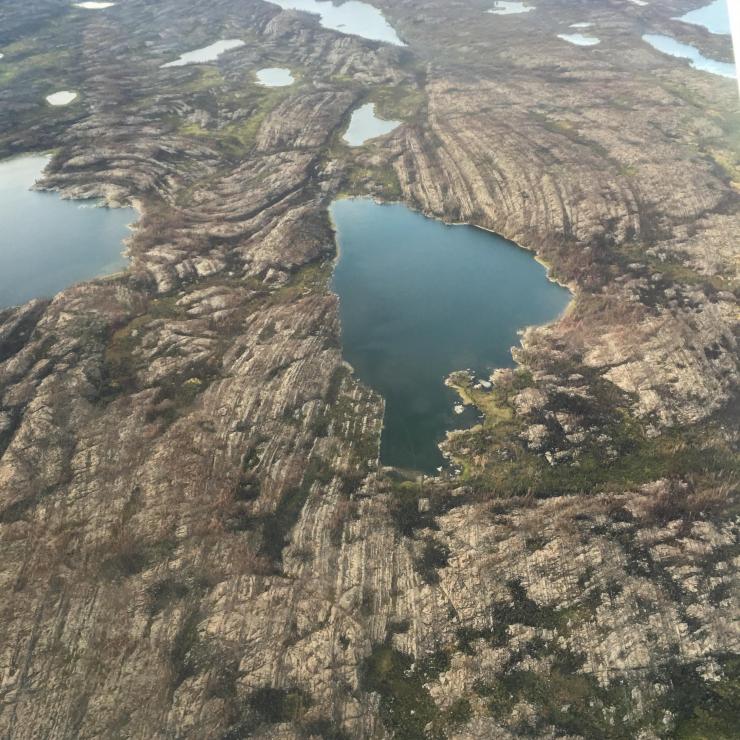 These 1.9 billion-year-old marine sediments are from the East Arm of the Great Slave Lake, Canada. Thousands of samples for this study were collected from the few places on Earth that have such remaining slivers of ancient seafloor. Credit: Georgia Tech / Yale - Reinhard / Planavsky 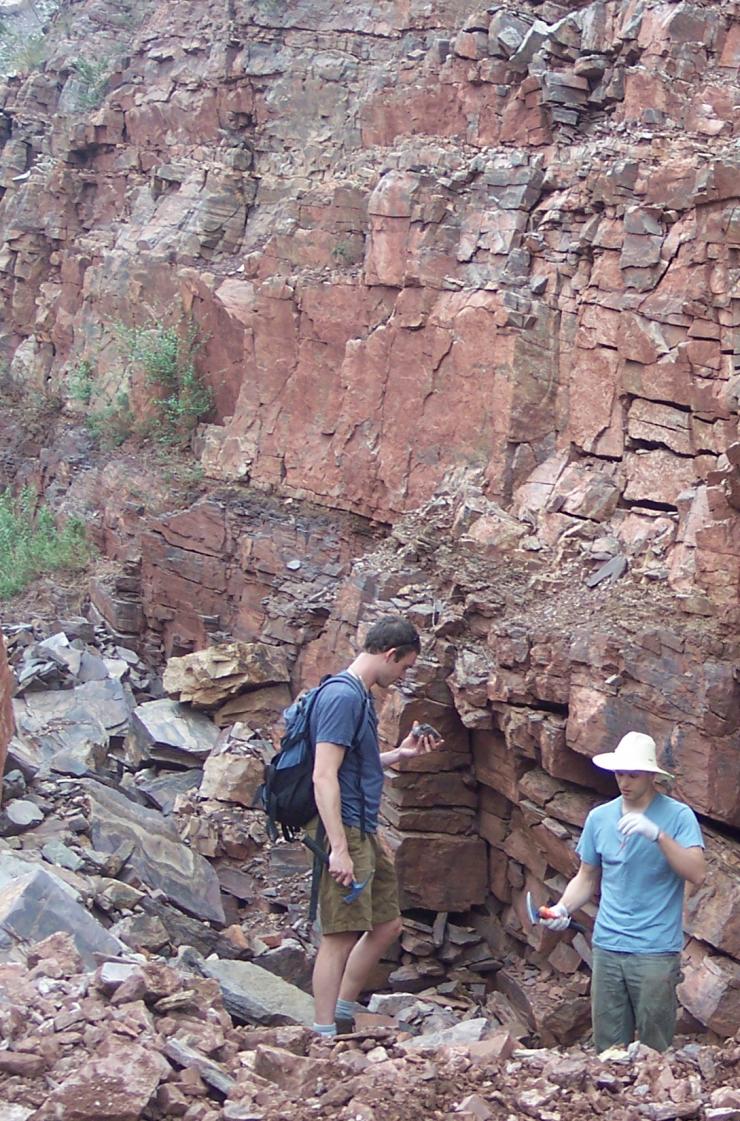 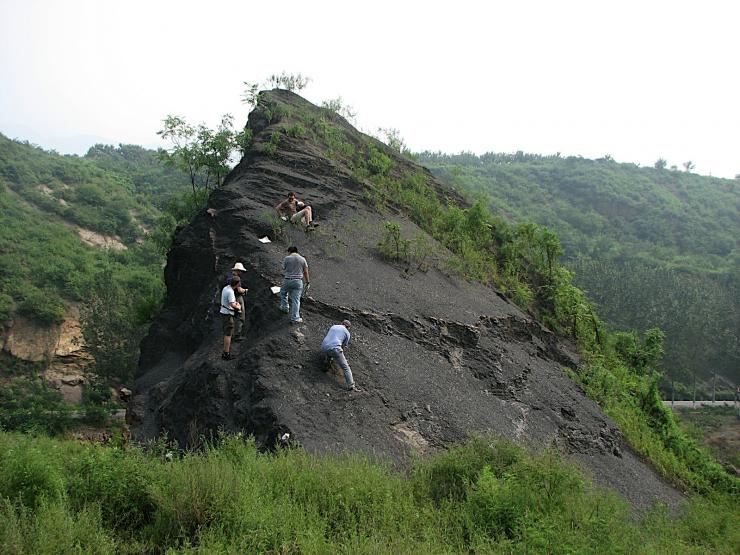 Georgia Tech's Reinhard, Yale's Planavsky, and colleagues sample pieces of ancient seafloor in the field in order to reconstruct the long-term evolution of ocean-atmosphere chemistry on Earth. 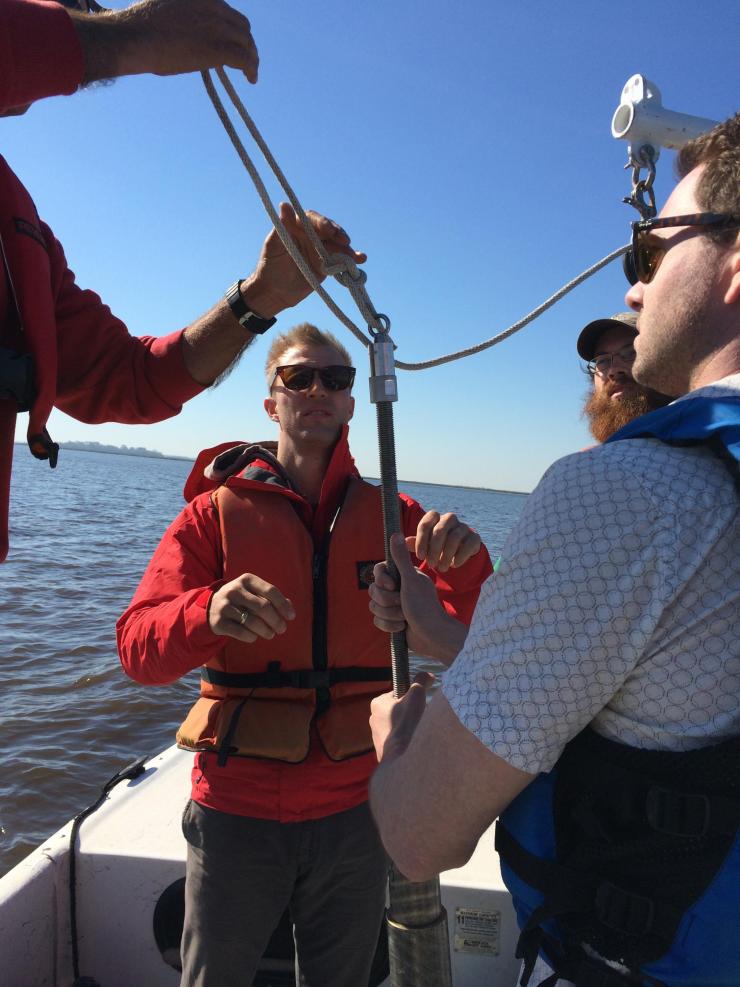