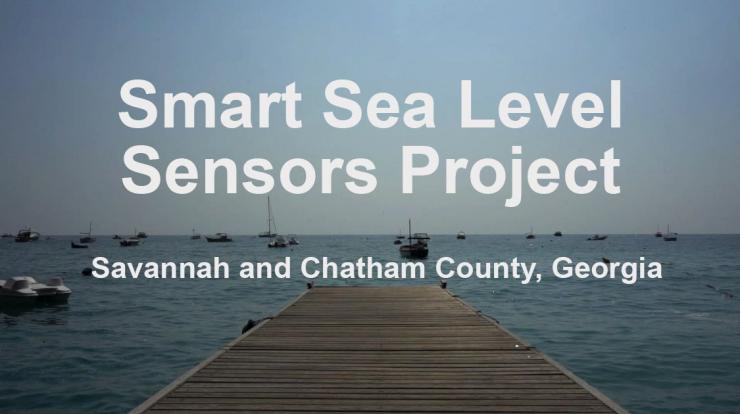 The people and resources at the Georgia Institute of Technology played a key role to deliver an innovative, cost-effective, wireless sensor technology platform. This Georgia Tech engineered, low cost technology solution is being used to monitor and measure sea water levels, barometric pressure, and temperature for the city of Savannah and Chatham county in the state of Georgia. While a large team of people were involved with the project, three Georgia Tech faculty members and one graduate student played significant roles to design and create the low power, wireless, sensor measurement technology units that have been placed in more than 40 areas around the city of Savannah and Chatham County to help safeguard this coastal community when major flooding events occur.

Originally funded in 2018 by a Georgia Smart Communities grant, the Smart Sea Level Sensors Project helps the city and the county measure water levels at specific flood points, like at a bridge over water, to help deploy critical resources to specific affected areas. For example, if a specific bridge is drowned from flood waters such as those resulting from a hurricane, the bridge must be closed so an inspector can determine if the bridge is safe to travel on or has been dangerously damaged by the high-water flood event. Sensors mounted on bridges wirelessly transmit water level, temperature, and air pressure data to servers that are accessible by the Chatham Emergency Management Agency (CEMA). The data, sent to and stored at Georgia Tech, is also available to the public and other scientists for analysis and monitoring. Previously, monitoring a flood event relied on data gathered from a single sea water level sensor buoy placed in a harbor slightly offshore with no clear way to identify if specific infrastructure or vulnerable areas were actually flooded with high water levels.

Finding a Wireless Solution
Many of us are familiar with wireless technologies such as Bluetooth, Wi-Fi, and cellular. They work great for their intended purposes, however they require a significant amount of power to work. These proven wireless technologies were not suitable for the Savannah/Chatham project which needed extremely low power wireless connectivity since the sensor units would only use battery power and would be placed in hard to reach areas with large time gaps between checkups and servicing.

“We tested and determined that LoRaWAN communication technology was perfect for this use case,” said Clark. His expertise is in networking; he is currently a member of Georgia Tech’s networking research group. LoRaWAN is only four years old, relatively new in the space of IoT/smart cities, and was designed for low power requirements and long range communications.

“For this high-density sensor deployment project, nothing was commercially available. Competing technologies were tens of thousands in cost. In the past, this type of project wasn’t feasible because of the cost. For our project, our LoRaWAN wireless radio transmission of data taken from the ultrasonic water sensor [and temperature and pressure data] doesn’t need to do anything 99 percent of the time. I may only need data sent a few times a day. LoRaWAN was perfect for this use case. And we were able to create the entire unit for less than $300 in materials,” said Clark.

The project had to deploy infrastructure to receive the radio signals, which can travel up to five miles, from the sensors by installing “gateways” around the county. Gateways relay the signal--most were deployed on county and city infrastructure such as placing them up high on existing poles and buildings. One gateway was placed at the top of Savannah’s city hall and one is on the pole of a tornado siren next to a fire station on Tybee Island.

“We worked with the county and city to determine what spots were available to house these shoebox sized gateways. These gateways then connect to the Internet, such as via an ethernet connection available in a building,” said Clark. “Today, we receive and host the data at Georgia Tech, and we have the support personnel and infrastructure like production servers and backup servers to manage the data over the lifetime of this project.”

Clark recruited them and their expertise early in the project.

Gilliland did much of the initial unit testing using a breadboard and connecting various candidate parts and sensors to test their effectiveness, durability, power consumption and scrutinize any features relevant to the project’s scope. Accuracy, low power consumption, and durability in an unfriendly saltwater environment were key factors.

“We took several off-the-shelf radio modules to see if they would really work with low enough power and in a harsh environment using D cell batteries. We found many hobbyist modules and sensors were never designed with drastic power savings in mind,” said Gilliland. “We constantly iterated the design—saving power along the way until we reached our design goals.” The ultra-sonic sensors being used measure water levels with millimeter accuracy.

According to Gilliland, the big challenge for this project was exposure to a harsh environment and from his view, adequate power deliver. The team wanted the unit to run on its own using four D cell batteries for at least a year, and ideally, for multiple years. After testing and identifying suitable component parts, Gilliland was also tasked with programming the firmware which instructs the internal hardware components, such as telling the radio transmitter when to send data and when to turn itself off. Boris Boeri, a visiting Georgia Tech graduate student from Tech’s campus in France, further assisted with programming the hardware.

The team also needed to identify a durable, waterproof weather enclosure to house the electronic and digital circuitry to protect the sensor and radio signal device. Clark and Gilliland worked together to identify and thoroughly test a common outdoor plastic waterproof box unit that could be modified to work with the sensor unit design.

Final Circuit Board Design, Manufacturing, and Assembly
Gilliland and Clark did a lot of heavy lifting to bring the sensor design to life, but it was Peter Presti that designed and delivered the final sleek, compact circuit board that fit into the shoebox-sized waterproof housings.

“The design of the circuit board and components is expandable,” said Presti. “We can easily add additional sensors to these units in the future. We also designed the unit so that students at Jenkins High School in Savannah taking an engineering course could examine and fully assemble them using soldering skills and laser cutting equipment sprinkled with a dose of gaining electrical component and microcontroller design knowledge.”

The custom embedded board was built in such a way that high school or college students could program it within an Arduino environment by simply connecting a USB cord to the unit using a computer. Arduino microcontroller boards started in 2005 as a tool for students in Italy to provide a low-cost and easy way for novices and professionals to create devices that interact with their environment using sensors and actuators. Common examples of such devices intended for beginner hobbyists include simple robots, thermostats and motion detectors.

The final manufacturing of the circuits boards was coordinated and completed by Presti using an outside manufacturing vendor approved for use by state guidelines.

The Project’s Future for Cities is Bright
“We have secured a new grant in 2020 to do more research on how we might modify this low cost, LoRaWAN architecture to be more resilient in emergency situations such as when power is cut off during a hurricane,” said Clark.

“The team at Georgia Tech’s Institute for People and Technology (IPaT) is well positioned to bring smart city projects like this together because of the breadth of technical expertise we can harness at Georgia Tech. We would have never gotten this additional funding except for the fact that we have a great, skilled team who have already executed this project. The wireless platform technology we’ve created demonstrates significant potential for other cities to benefit from our distributed, low cost sensor network which could enable smarter cities and better decision making.” 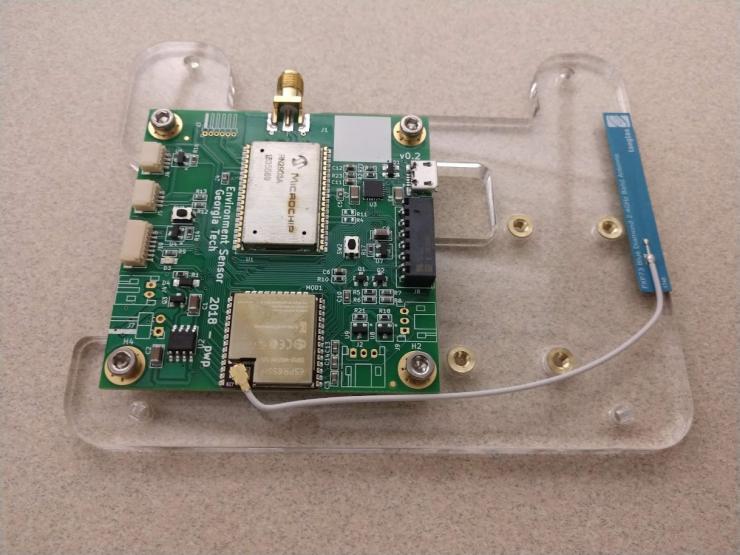 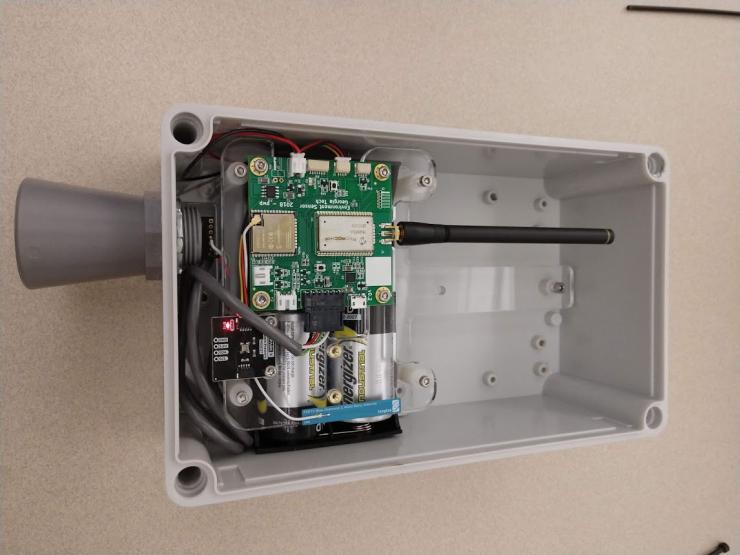 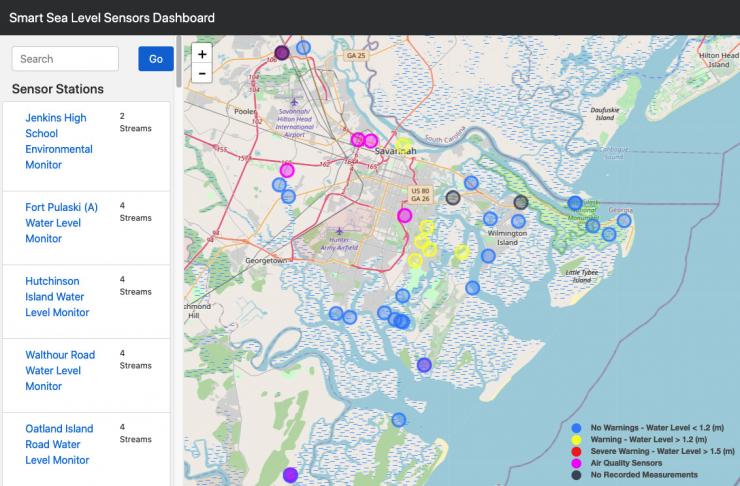