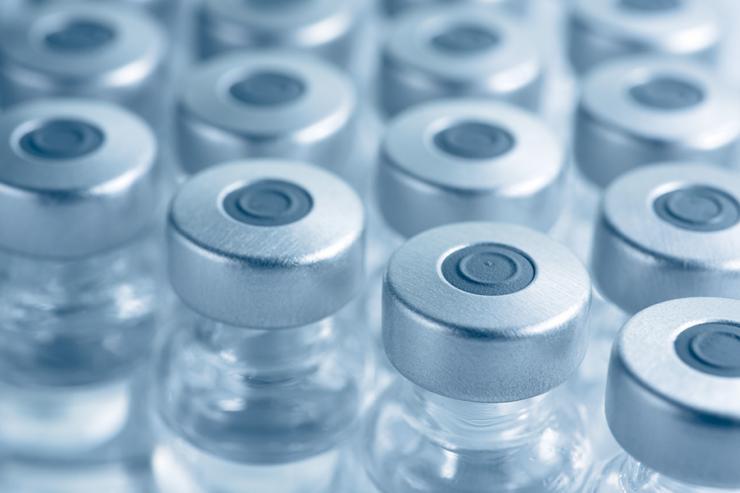 When one or more coronavirus vaccines receives FDA emergency use authorization, it will launch a major public health and logistics initiative. (Getty Images - not for republication)

When one or more coronavirus vaccines receives FDA emergency use authorization, it will launch a public health and logistics initiative unlike any in U.S. history.

Hundreds of millions of doses will have to distributed nationwide and kept cold until healthcare professionals can administer not one, but two doses to each person. And enough skeptical members of the population will have to be persuaded to receive the vaccine to slow virus transmission.

Beyond those challenges, the distribution effort will have to adapt to unexpected and uneven demand; accommodate recipients who may not return on time for a second dose; train hundreds of thousands of staff from clinics, pharmacies, doctor’s offices, and hospitals; prioritize serving high-risk groups first while encouraging others to wait — all while under tremendous pressure to get the much-anticipated vaccines into use as case counts and the death toll continue rising.

“Time is of the essence because the virus is already so widespread,” said Pinar Keskinocak, the William W. George Chair and professor in the H. Milton Stewart School of Industrial and Systems Engineering (ISyE) and director of the Center for Health and Humanitarian Systems at the Georgia Institute of Technology. “With the pressure on our timeline, knowledge of how quickly the disease is spreading, and the broad U.S. and global need, I can’t think of a comparable public health initiative that has ever been undertaken.”

Shipping and Keeping Hundreds of Millions of Doses Cold

Three vaccines, produced by Moderna, Pfizer and its German partner BioNTech, and Oxford-AstraZeneca, are expected to be available first. The Pfizer-BioNTech vaccine will need to be kept ultra-cold — minus 94 degrees Fahrenheit — on its journey to individual Americans. The Moderna drug won’t have such demanding conditions, but both it and the Pfizer vaccine will tax the existing “cold chain” that keeps vaccines and other temperature-sensitive products in a narrow range of conditions during transport and storage.

The Oxford-AstraZeneca vaccine will have much less stringent requirements and faster ramp-up in capacity, though early testing suggests its efficacy may be lower than the others. That will create tradeoffs between efficacy versus access and speed in distribution.

Plans already exist to get the vaccines from manufacturers to the states, each of which has developed its own distribution plan. Keskinocak worries mostly about “last mile” plans — getting the vaccines to where they will be injected — and getting individuals to those locations.

“Access is going to be a challenge,” she said. “You may be able to get it to locations where it can be distributed, but you have to make sure the people who really need the vaccine can easily access those locations.”

Cold chain transportation, tracking, tracing, and storage already exist in most areas, but refrigeration could be challenging for rural areas that may be at the end of the chain, especially for the vaccine requiring very cold temperatures beyond the capability of freezers found in most doctor’s offices and clinics. And cold can sometimes be too cold, Keskinocak said.

“We often think about keeping it cold, but sometimes it may be too cold, which is not good. It’s not just whether the temperature exceeded the required level, but also whether it went below that. It is important to keep the vaccine exactly at the required temperature level.”

Pfizer has developed a shipping container that includes a temperature tracking device — and 50 pounds of dry ice to maintain the right temperature during transit. Because it is contained in small vials and the liquid vaccine is diluted for use, the overall volume being shipped will be relatively small, limiting the number of packages that will be moved and stored, Keskinocak noted.

Ultimately, the cold chain may play a significant role in vaccine effectiveness. Currently, the vaccines being produced by Pfizer/BioNTech and Moderna are reported to have a higher efficacy than the Oxford-AstraZeneca vaccine — but only if they can be maintained at the proper temperatures. The timing, magnitude, and duration of temperature fluctuations during transport and before administration could affect that in ways that may be difficult to assess.

“Our current modeling shows that a vaccine that is less effective but that can be distributed more quickly and more widely might work better in some settings than a more effective vaccine, thereby reducing the total number of infections in the population,” Keskinocak said.

If You Build It, Will They Come?

Expectations are that the nation is hungry for a vaccine to escape the horrors of Covid-19. But a recent Gallup survey shows that only 58% of respondents said they planned to receive the vaccine when it becomes available. Boosting that percentage will require a massive communications effort to overcome vaccine reluctance and concerns fueled by the uneven nature of the U.S. pandemic response.

“If we can get the vaccine to locations where people can access it, and we have the necessary syringes, supplies, and PPE, as well as the healthcare staff to administer the injections, it’s not clear that people will come to receive it in large enough numbers,” Keskinocak said. “That’s one major component missing from a lot of the plans that I see at the state level.”

The communications program will have to run in parallel to the vaccine distribution, and they have to be coordinated so that supply meets demand.

“Public health communication and dissemination of information at the right time and in the right language is going to be at least as important and challenging as the logistics of distributing the vaccine,” Keskinocak said. “Communication is going to shape demand to a large extent. If one is more effective than the other, we will have a mismatch between demand and supply.”

Different demographic populations have different levels of trust for medicine in general and vaccines in particular, she said, so communications campaigns will have to focus on issues of concern to those groups. Unexpected variations in vaccine demand caused by these concerns could also create logistical uncertainties.

“We can try to forecast demand, and ship supplies to those locations,” she said. “But historically, we have seen that demand can exceed supply in one location while inventory builds up in another location. We need to avoid this situation of unmet demand and unused vaccine.”

Another issue will be the two doses necessary for the vaccine. The second dose must be received within a narrow range of time for the two-dose vaccine to be effective. Should a second dose be reserved for every person receiving a first dose, or should the goal be to get as many doses out as possible?

“Some people may never show up to be vaccinated, while others will receive the first dose, but may not come back for the second dose,” she said.

Getting the Program Started

The first available doses will likely go to healthcare workers and first responders who are on the front lines of battling Covid-19. That is expected to be the easier part of vaccination logistics, and the lessons learned there should help with the much more massive vaccination campaign for high-risk individuals and the general public.

As vaccine production and distribution capacity ramp up, other groups will be next in line. While distributing small batches as manufacturers produce it can create some supply challenges, that also allows the system to more easily adjust to unexpected demand.

Even though distributing and administering vaccines is something the U.S. healthcare system does routinely, the size and timeline of this project are unprecedented, Keskinocak noted.

Beyond the logistical and communications needs, the vaccination program will also have a strong information technology component. Administration will likely be by appointment, and each injection will have to be reported to a vaccine registry to provide a record of which vaccines people have received and when.

Vaccinating People Who May Already Be Immune

It’s estimated that the number of reported Covid-19 cases may be just 10% of the actual number of infections in the U.S. Assuming recovery from the virus confers immunity for some period of time means there may be quite a few people who don’t actually need the vaccine right away to be protected. But there are currently no plans to determine whether recipients are already immune before they receive the vaccine.

“There are a lot of people out there who have some level of immunity to the coronavirus,” Keskinocak said. “The plans I’ve seen don’t include the serological testing that would be needed to identify people with some level of immunity, which could be around 30% of the population by the time the vaccine gets out to the general public.”

Testing for immune antibodies could be done ahead of the vaccination program, but that would create an extra step in a process that is already quite complicated. Healthcare systems such as the U.S. Department of Veterans Affairs or certain private insurance plans could include that step, especially if vaccine supplies lag behind demand.

“The big complexity is timing,” she said. “Once vaccines become available, you’ll want to deliver them as quickly as possible to as many people as possible in a very short time frame.”

Annual vaccination campaigns for the seasonal flu set ambitious goals for the population levels they want to reach, but the time challenges will be much greater for the coronavirus vaccine.

“The seasonal flu vaccine becomes available months before the virus spreads broadly, so we have quite a bit of time to administer it before we get into the peak of the flu season,” she said. “We have been in the midst of the Covid-19 pandemic for several months now. We are really late in the game, so we don’t have the luxury of time.”

Keskinocak is cautiously optimistic that the challenges will ultimately be addressed.

“There are certainly still lots of unknowns,” she said. “But the state plans I have seen look reasonable from a supply chain standpoint. Some of the decisions will be made once the states receive the vaccine, and exactly how they do it will be somewhat up to the local jurisdictions. There are still many things that need to be decided to make this unprecedented initiative live up to its goals.” 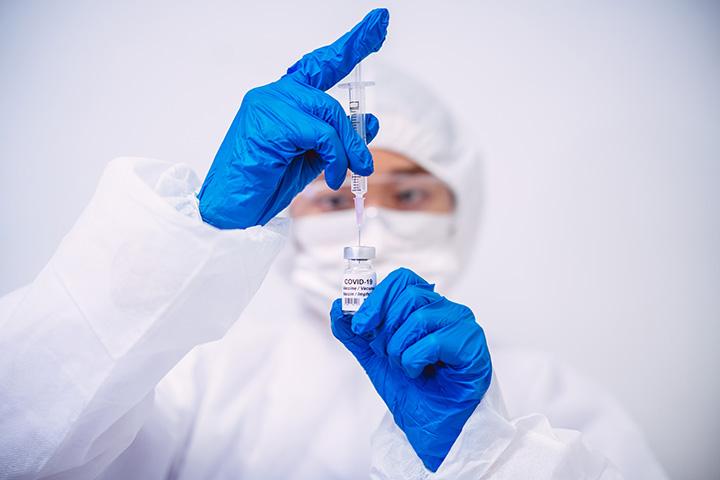 When one or more coronavirus vaccines receives FDA emergency use authorization, it will launch a major public health and logistics initiative. (Getty Images - not for republication) 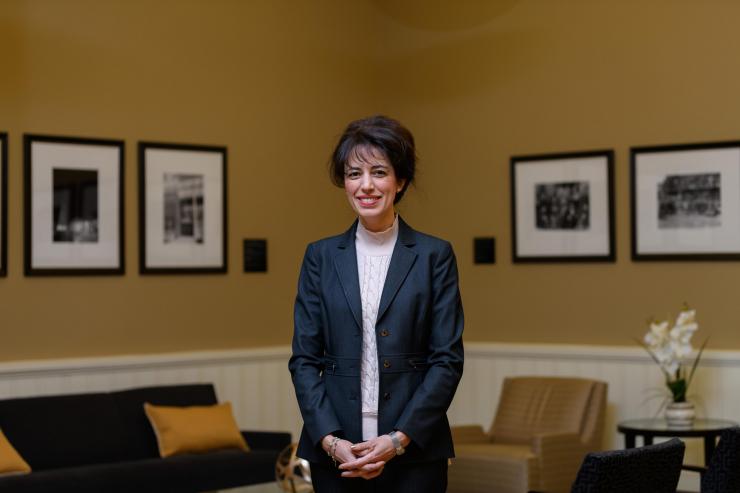 Pinar Keskinocak is the William W. George Chair and professor in the H. Milton Stewart School of Industrial and Systems Engineering (ISyE) and director of the Center for Health and Humanitarian Systems at the Georgia Institute of Technology. (Credit: Rob Felt, Georgia Tech)