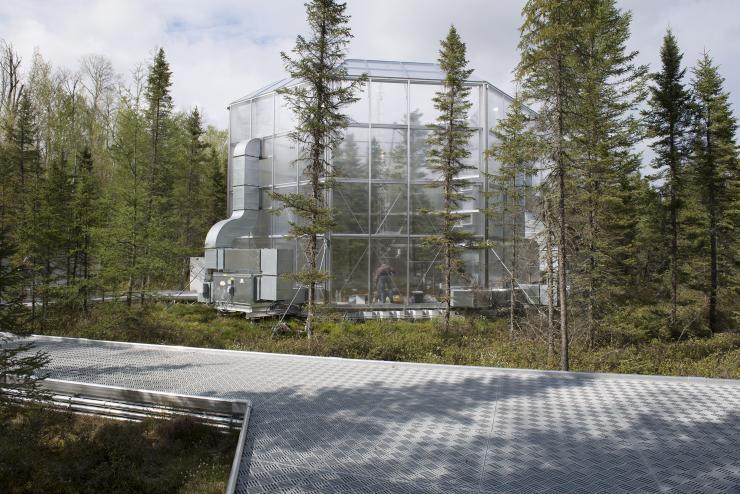 Scientists studying large, ancient carbon deposits in northern peat bogs to see if climate change might push them to emit methane, have discovered that they might not. The surprising result of a new study may be an early indicator that there is one less potentially large source of a powerful greenhouse gas in Earth’s future.

The researchers’ findings are early results from a long-range experiment and will need to stand the test of time and further study.

Scientists from Florida State University, the University of Oregon, the Georgia Institute of Technology, Oak Ridge National Laboratory and the USDA Forest Service Northwest Station published a paper with the findings on Tuesday, December 13, 2016, in the journal Nature Communications.

As global warming progresses, a hypothesis has held that methane may rise into the atmosphere from ancient layers of dead peat in cold, northern bogs to make climate change even worse.

These underground carbon stores have built up for some 10,000 years, and hold about 30 percent of Earth’s total 1,500 billion tons of organic soil carbon. That total is as much carbon as is currently in Earth’s atmosphere.

Scientists have feared climate change may lead microbes to digest the carbon stores and belch out carbon dioxide, and also methane, a particularly potent greenhouse gas that traps about 45 times as much heat as carbon dioxide. That would significantly exacerbate global warming.

But these latest results appear to allay those fears, should the findings hold up over time.

Ecological conditions in boreal peat bogs have helped create these underground carbon stores by allowing peat moss, or Sphagnum, and other plants to absorb more greenhouse gasses from the atmosphere than the rest of the bog ecosystem emits. But that could change, if rising temperatures boost greenhouse gas emissions, and the bogs could switch from sinks to sources or lesser sinks.

MORE PHOTOS: Press handouts, all rights free for reporting on this project.

To get a picture of possible greenhouse gas consequences, the U.S. Department of Energy is methodically heating parts of a bog in northern Minnesota for a 10-year period to mimic various climate change scenarios. The experiment is called the SPRUCE project, which stands for Spruce and Peatland Responses Under Climate and Environmental Change.

Findings from the experiment should not be confused with those from studies of thawing permafrost, which contains soil carbon with different potentials for producing methane.

After about the first year of heating bog plots, methane emissions did rise significantly, but they came from the thinner layer of peat at the bog’s surface. They did not come streaming out of the massive layers of deep peat soil carbon as had been hypothesized.

That came as a pleasant surprise to the scientists, including Georgia Tech’s Joel Kostka, a microbiologist studying the activity of microbes in the carbon cycle at SPRUCE.

“If the release of greenhouse gasses is not enhanced by temperature of the deep peat, that’s great news,” Kostka said, “because that means that if all other things remain as they are, that the deep peat carbon remains in the soil.”

To mimic what was observed in the field, University of Oregon researchers tested deep peat under anaerobic conditions in the lab, and it tenaciously hung on to its solid carbon.

Kostka, a professor at Georgia Tech’s School of Biological Sciences and School of Earth and Atmospheric Sciences, and postdoctoral assistant Max Kolton also heated samples to check for corresponding activity by microbes called methanogens that are known to produce methane under anaerobic conditions. The results will be submitted for future publication, but they add interesting depth to the current published results.

“We took ancient peat out from different depths, incubated it in the lab, and at one to two meters’ depth, we saw very few changes in microbial activity and little methane coming out,” Kostka said. That concurred with the profiling of methanogen DNA in samples taken on site at SPRUCE in the deep peat, results that were published in the current paper.

But what makes the solid carbon in deep peat in boreal wetlands apparently so stable? Kostka and SPRUCE colleagues are researching to find out.

“Is it mainly because it’s wet, and therefore there’s not much oxygen in the soil? Is it because it’s acidic?” Kostka asked. “Is it because it’s cold? Or is it, in large part, because of organic matter recalcitrance, meaning the type of carbon that is produced by the peat moss actually poisons microbial activity? Right now our hypothesis is it’s the last one.”

Even with that good news, a rise in methane coming from top layers of peat could someday be harmful to Earth’s climate, if it’s more than a passing phenomenon. “That could contribute to climate change because methane has such a high warming potential,” Kostka said.

“In the lab, our colleagues at the University of Oregon measured more methane at higher temperatures from the surface peat,” Kostka said. In the field, Kostka and Kolton also found a high number of genetic fragments associated with methane-producing enzymes in that upper layer of peat, corroborating methanogen microbes as the source of the methane.

It’s too early to tell if those emissions will continue and what net effect they will have. Scientists working at SPRUCE will glean more insights into warming’s possible generation of methane and also CO2 in northern bogs, as the 10-year experiment progresses.

SPRUCE’s findings will be factored into computational climate simulations to increase their scope.

READ: Comprehensive background article on SPRUCE including Kostka’s work on the project

Authors of the research paper included: R.M. Wilson and J.P. Chanton from Florida State University; A.M. Hopple, L. Pfeifer-Meister and S.D. Bridgham from the University of Oregon; M.M. Tfaily from the Pacific Northwest National Laboratory; S.D. Sebestyen and R. Kolka from the USDA Forest Service; C.W. Schadt, L.A. Kluber, N.A. Griffiths and P.J. Hanson from Oak Ridge National Laboratory; C. Medvedeff and J.K. Keller from Schimd College of Science and Technology; and T.P. Guilderson from Lawrence Livermore National Laboratory. The research was funded by the U.S. Department of Energy (contracts DE-AC05-00OR22725, DE-SC0012088, DE-SC0008092, DE-SC0012088). Any opinions, findings and conclusions or recommendations expressed in this material are those of the author(s) and do not necessarily reflect the views of the sponsoring agencies 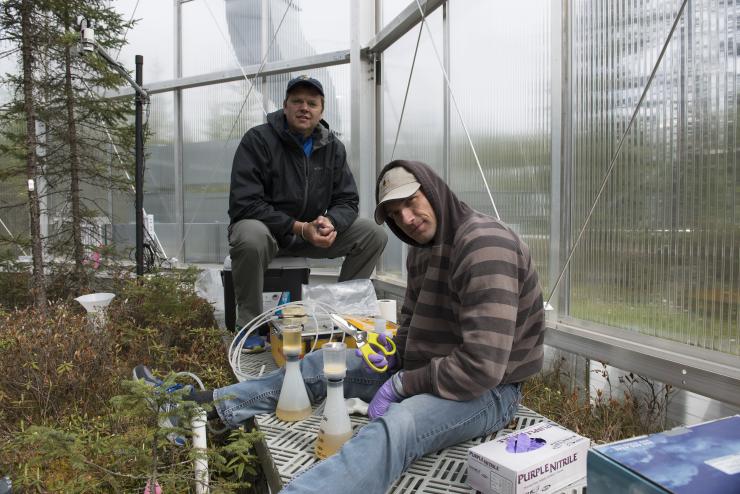 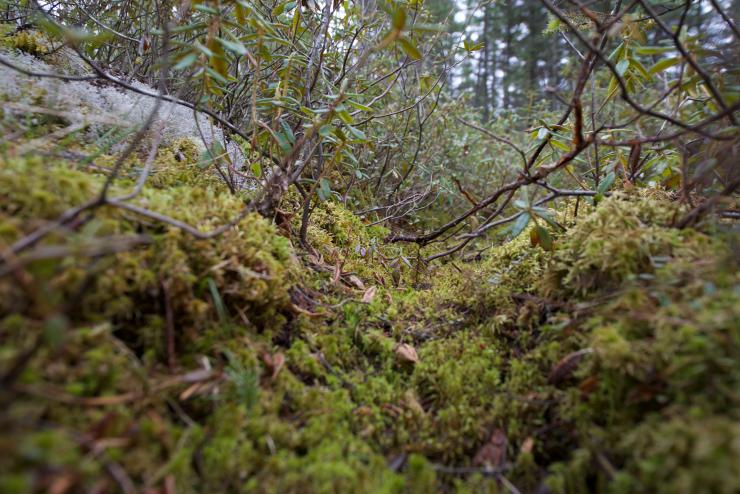 The peat moss, or Sphagnum, that grows in hummocks (small hills) and hollows (small valleys) are two different species. Over the millennia, they have produced large underground stores of soil carbon. These may prove to be stable in the face of global warming and may not convert in significant volumes to greenhouse gasses, a new study says.  Credit: Georgia Tech / Ben Brumfield 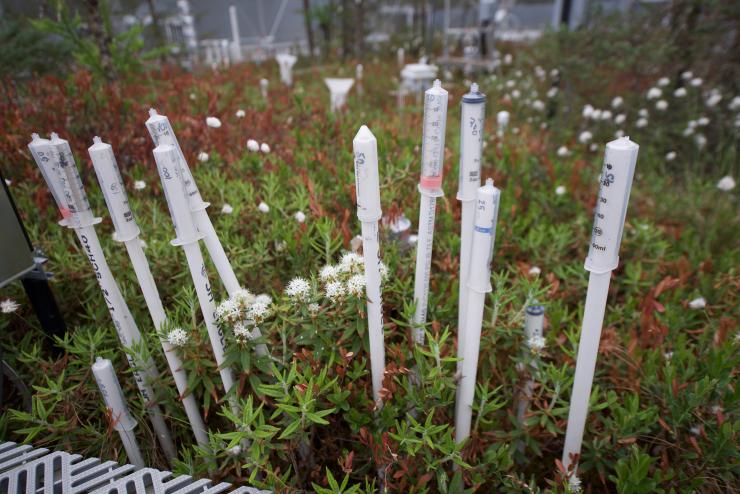 Tubes leading down to ground water inside an enclosure that augments the climate scenario at the SPRUCE climate change experiment in northern Minnesota. Credit: Georgia Tech / Ben Brumfield 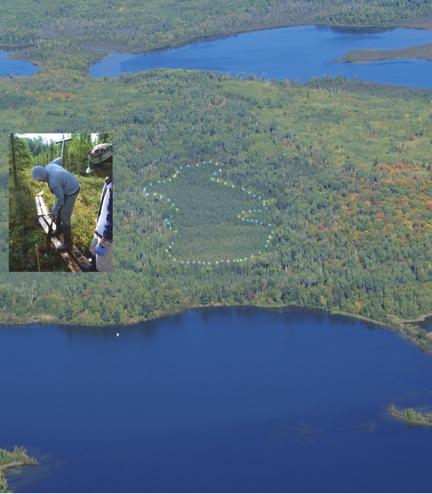