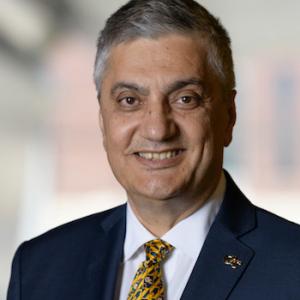 Abdallah came to Georgia Tech from the University of New Mexico, where he served as the university’s 22nd president, as provost and executive vice president for academic affairs, as well as department chair of the electrical and computer engineering (ECE) department. During his tenure, Abdallah oversaw long-range academic planning and efforts to improve student success, as well as retention-achievement and graduation achievement rates.

He conducts research and teaches courses in the area of systems theory with a focus on control, communications, and computing systems. His research has been funded by the National Science Foundation, the Air Force Office of Scientific Research, the U.S. Naval Research Laboratory, national laboratories, and various companies. Abdallah, who is fluent in English, French, and Arabic, is a senior member of IEEE and a recipient of that organization’s Millennium Medal.

Abdallah began his college career at the Faculté d’ingénierie of the Université Saint-Joseph in Lebanon, then obtained a Bachelor of Engineering (B.E.) degree from Youngstown State University in 1981, and a M.S. and Ph.D. in electrical engineering from Georgia Tech in 1982 and 1988, respectively.

He has published eight books (three as co-editor and five as co-author) and more than 300 peer-reviewed papers and provided expert testimony to the U.S. House of Representatives Committee on Science, Space, and Technology.