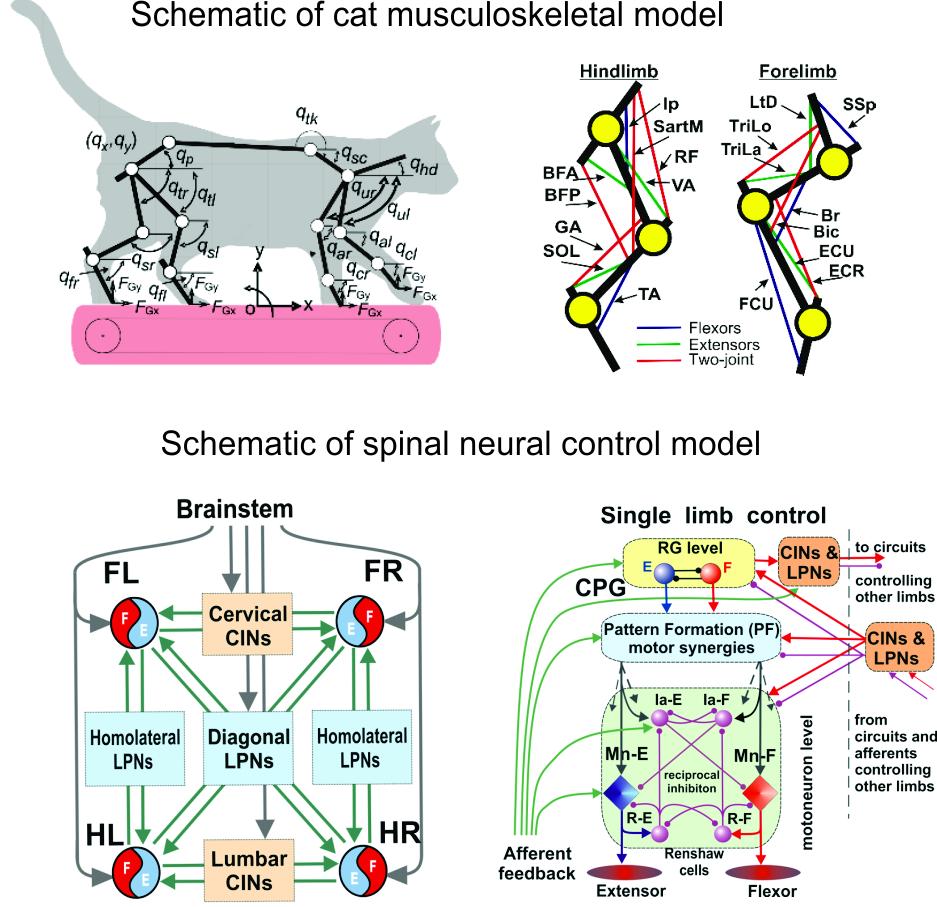 Cats always land on their feet, but what makes them so agile? Their unique sense of balance has more in common with humans than it may appear. Researchers at the Georgia Institute of Technology are studying cat locomotion to better understand how the spinal cord works to help humans with partial spinal cord damage walk and maintain balance.

Using a mix of experimental studies and computational models, the researchers show that somatosensory feedback, or neural signals from specialized sensors throughout a cat’s body, help inform the spinal cord about the ongoing movement and coordinate the four limbs to keep cats from falling when they encounter obstacles. Research suggests that with those motion-related sensory signals the animal can walk even if the connection between the spinal cord and the brain is partially fractured.

Understanding the mechanisms of this type of balance control is particularly relevant to older people who often have balance issues and can injure themselves in falls. Eventually, the researchers hope this could bring new understanding to somatosensory feedback’s role in balance control. It could also lead to progress in spinal cord injury treatment because the research suggests activation of somatosensory neurons can improve spinal neural networks’ function below the site of spinal cord damage.

“We have been interested in the mechanisms that make it possible to reactivate injured networks in the spinal cord,” said School of Biological Sciences Professor Boris Prilutsky. “We know from previous studies that somatosensory feedback from moving legs helps activate spinal networks that control locomotion, enabling stable movement.”

The researchers presented their findings in “Sensory Perturbations From Hindlimb Cutaneous Afferents Generate Coordinated Functional Responses in All Four Limbs During Locomotion in Intact Cats” in the journal eNeuro.

Although genetically modified mouse models have recently become dominant in neural control of locomotion research, the cat model offers an important advantage. When they move, mice remain crouched, meaning they are less likely to have balance problems even if somatosensory feedback fails. Humans and cats, on the other hand, cannot maintain balance or even move if they lose sensory information about limb motion. This suggests that larger species, like cats and humans, might have a different organization of spinal neural network controlling locomotion compared to rodents.

Georgia Tech partnered with researchers at the University of Sherbrooke in Canada and Drexel University in Philadelphia to better understand how signals from sensory neurons coordinate movements of the four legs. The Sherbrooke lab trained cats to walk on a treadmill at a pace consistent with human gait and then used electrodes to stimulate their sensory nerve.

The researchers focused on the sensory nerve that transmits touch sensation from the top of the foot to the spinal cord. By electrically stimulating this nerve, researchers mimicked hitting an obstacle and saw how the cats stumbled and corrected their movement in response. Stimulations were applied in four periods of the walking cycle: mid-stance, stance-to-swing transition, mid-swing, and swing-to-stance transition. From this, they learned that mid-swing and the stance-to-swing transition were the most significant periods because the stimulation increased activity in muscles that flex the knee and hip joints, joint flexion and toe height, step length, and step duration of the stimulated limb.

“In order to maintain balance, the animal must coordinate movement of the other three limbs, otherwise it would fall,” Prilutsky said. “We found that stimulation of this nerve during the swing phase increases the duration of the stance phase of the other limbs and improves stability.”

In effect, when the cat stumbles during the swing phase, the sensation triggers spinal reflexes that ensure the three other limbs stay on the ground and keep the cat upright and balanced, while the swing limb steps over the obstacle.

With these Canadian lab experiments, the researchers at Georgia Tech and Drexel University are using observations to develop a computational model of the cat’s musculoskeletal and spinal neural control systems. The data gathered are used to compute somatosensory signals related to length, velocity, and produced force of muscles, as well as pressure on the skin in all limbs. This information forms motion sensations in the animal’s spinal cord and contributes to interlimb coordination by the spinal neuronal networks.