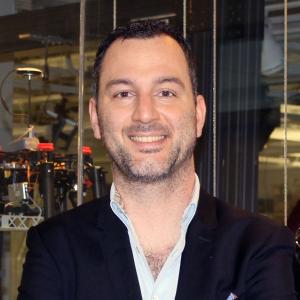 Kyriakos G. Vamvoudakis was born in Athens, Greece. He received the Diploma (a 5 year degree, equivalent to a Master of Science) in Electronic and Computer Engineering from Technical University of Crete, Greece in 2006 with highest honors. After moving to the United States of America, he studied at The University of Texas at Arlington with Frank L. Lewis as his advisor and he received his M.S. and Ph.D. in Electrical Engineering in 2008 and 2011 respectively. From May 2011 to January 2012, he was working as an Adjunct Professor and Faculty Research Associate at the University of Texas at Arlington and at the Automation and Robotics Research Institute. During the period from 2012 to 2016 he was a project research scientist at the Center for Control, Dynamical Systems and Computation at the University of California, Santa Barbara. He was an assistant professor at the Kevin T. Crofton Department of Aerospace and Ocean Engineering at Virginia Tech until 2018. He currently serves as an Assistant Professor at The School of Daniel Guggenheim School of Aerospace Engineering at Georgia Tech. His research interests include approxIMaTe dynamic programming, game theory, and optimal control. Recently, his research has focused on cyber-physical security, networked control, smart grid and multi-agent optimization. Dr. Vamvoudakis is the recipient of a 2019 ARO YIP award, a 2018 NSF CAREER award, and of several international awards including the 2016 International Neural Network Society Young Investigator (INNS) Award, the Best Paper Award for Autonomous/Unmanned Vehicles at the 27th Army Science Conference in 2010, the Best Presentation Award at the World Congress of Computational Intelligence in 2010, and the Best Researcher Award from the Automation and Robotics Research Institute in 2011. He is a member of Tau Beta Pi, Eta Kappa Nu and Golden Key honor societies and is listed in Who's Who in the World, Who's Who in Science and Engineering, and Who's Who in America. He has also served on various international program committees and has organized special sessions for several international conferences. He currently is a member of the Technical Committee on Intelligent Control of the IEEE Control Systems Society (TCIC), a member of the Technical Committee on Adaptive Dynamic Programming and Reinforcement Learning of the IEEE Computational Intelligence Society (ADPRLTC), an Associate Editor of the IEEE Computational Intelligence Magazine, an Associate Editor of the Journal of Optimization Theory and Applications, an Editor in Chief of the Communications in Control Science and Engineering, a registered Electrical/Computer engineer (PE) and a member of the Technical Chamber of Greece. He is a Senior Member of IEEE.