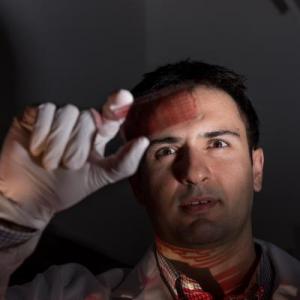 A. Fatih Sarioglu received the B.Sc. degree from Bilkent University, Ankara, Turkey in 2003, and the M.S. and Ph.D. degrees from Stanford University in 2005 and 2010, respectively, all in Electrical Engineering.

Dr. Sarioglu worked as a postdoctoral research associate at the Center for Nanoscale Science and Engineering at Stanford University from 2010 to 2012. From 2012-2014, he was a research fellow at the Center for Engineering in Medicine, Massachusetts General Hospital and Harvard Medical School. In October 2014, he joined the School of Electrical and Computer Engineering at the Georgia Institute of Technology as an assistant professor.

Dr. Sarioglu's research interests are at the interface of nano-/micro-engineering and biomedicine. He is particularly interested in developing N/MEMS-based technologies for biomedical applications.