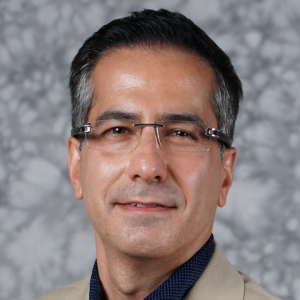 Farrokh Ayazi is the Ken Byers Professor of Microsystems in the School of Electrical and Computer Engineering at the Georgia Institute of Technology, Atlanta, GA. He received the B.S. degree in electrical engineering from the University of Tehran in 1994, and the M.S. and Ph.D. degrees in electrical engineering from the University of Michigan, Ann Arbor, in 1997 and 2000, respectively. His main research interest lies in the area of Integrated Micro and Nano Electro Mechanical Systems (MEMS and NEMS), with a focus on micro and nano mechanical resonators, and mixed-signal interface circuits for MEMS and sensors.

Dr. Ayazi is an editor for the IEEE Transactions on Electron Devices and a past editor for the IEEE/ASME Journal of Microelectromechanical Systems. He is a 2004 recipient of the National Science Foundation CAREER Award and has received the Outstanding Junior Faculty Member Award and the Richard M. Bass/Eta Kappa Nu Outstanding Teacher Award from the School of ECE at Georgia Tech. The author of over 200 refereed technical and scientific articles, Dr. Ayazi and his students have received several best paper awards at International conferences including MEMS, Transducers, Sensors, and Frequency Control Symposium. He served on the technical program committee of the IEEE International Solid State Circuits Conference (ISSCC) for six years (2004-2009). He was the chairman of the Display, Sensors and MEMS (DSM) sub-committee at the IEEE International Electron Devices Meeting (IEDM 2011).

In 2008, he co-founded and became the CTO of Qualtré, a spinout company of his research lab that develops bulk acoustic wave gyroscopes and motion sensors for personal navigation systems. Dr. Ayazi is a fellow of IEEE and holds 50 patents in the area of MEMS and Microsystems. He was the general chair of the IEEE Micro-Electro-Mechanical-Systems (MEMS) conference in 2014, held in San Francisco, CA.