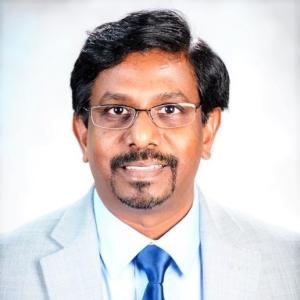 Paul Joseph received a Bachelor and a Master of Science degrees in Chemistry in 1985 and 1988 respectively from the Loyola College, Chennai, India. After a brief time working in an industry, he continued his studies and received his Ph.D. in Physical Chemistry from the University of Madras in 1997. Dr. Joseph graduated with an MBA (specializing in Technology Innovation & Commercialization) from the Georgia Institute of technology in 2021.

From 1994 to 1997, he was a Council of Scientific and Industrial Research - Senior Research Fellow at the Department of Physical Chemistry, University of Madras, where he has carried out an extensive research work in the field of Phase Transfer Catalysis. From 1997 to 2000, he was a post-doctoral fellow for the National Science Council of Taiwan at the National Tsing Hua University. In April 2000, Dr. Joseph moved to the Georgia Institute of Technology and joined as a research faculty at the School of Chemistry and Biochemistry. From 2001 to 2005, he was a Research Scientist at the School of Chemical and Biomolecular Engineering and during this time, his research was focused on the development of new sacrificial polymeric materials and its application in the fields of Microelectronics, Microfluidics, and Microelectromechanical Systems. From November 2005, he joined the Microelectronics Research Center (MiRC) as a biomedical engineering domain expert & external user research coordinator for the NSF-funded National Nanotechnology Infrastructure Network (NNIN) and continued his research in the area of bio-sensor development for disease detection. From 2006 – 2009, Dr. Joseph served as a member of the operations planning committee and a management staff during the construction phase of the Marcus Nanotechnology Cleanroom facility (NRC). Dr. Joseph also served as a member of the Advanced Technology Team at the Institute for the Electronics and Nanotechnology (IEN).

Currently, Dr. Joseph is a Principal Research Scientist at the Institute for Electronics and Nanotechnology and is also serving as a Director of External User Programs for the Southeastern Nanotechnology Infrastructure Corridor (SENIC), which is one among the 16 member sites of the NSF-funded National Nanotechnology Coordinated Infrastructure (NNCI) program. Dr. Joseph’s current research interests are in Nanobiotechnology, Bio-MEMS, and Biosensors’ application as diagnostics. Dr. Joseph’s original research work overall resulted in 85 publications, reports, conference presentations, trade publications, and 7 awarded US and international patents.

In 2022, Joseph received a prestigious Fulbright Specialist Award from the Fulbright Foreign Scholarship Board and was elected as IEN’s representative to the Inaugural Georgia Tech Interdisciplinary Research Faculty Advisory Council. He was also appointed as a Guest Editor for Frontiers in Nanotechnology for the energy applications section of the publication.