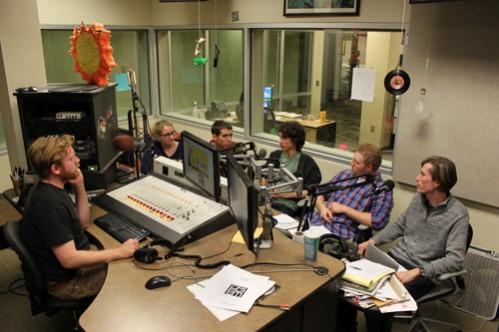 Does a dependency on a smart phone make you a cyborg? Does riding a bicycle? What about throwing spears at wooly mammoths? The people behind the mics at the Georgia Tech Sci Fi Lab are deep in discussion. It’s Two-Minute Madness time on the WREK radio show. The hosts and special guests speed-talk through mentions of Dr. Who, iPhones, Lance Armstrong, Luke Skywalker, Neanderthals, the Six Million Dollar Man, Star Trek, Terminator and zombies — all in the quest of determining, what, specifically, makes something a cyborg.

“We can say that this week's topic is ‘cyborgs,’ for example, but that can mean different things to different people: from Darth Vader, to Google Glass, to Daft Punk,” said Adam Le Doux, program manager and a host of the show. When not on the air, he’s a computational media major, a joint studies program between the College of Computing and the School of Literature, Media, and Communication (LMC) in Ivan Allen College of Liberal Arts. LMC is one of the coordinators of Sci Fi Lab along with the Georgia Tech Library and WREK 91.1 FM.

Since 2006, Sci Fi Lab has taken to the radio waves to discuss all things science fiction. Every Thursday at 7 p.m. a group of culture studies researchers and computer thinkers gather to discuss the spectrum of science fiction. The show has been picking up traction with the science fiction community, both locally and nationally.

"Six years into the program, we find that now we're approached by authors and artists who want to appear on the show, and we've even been studied in the University of Liverpool's grad program in Science Fiction Studies as an example of living science fiction," said Lisa Yaszek, a professor in LMC and a behind-the-scenes Sci Fi Lab organizer.

“We try to cover the best in current and popular science fiction from all media — literature, film, television — and we try to tie that in with the real science and research that occurs on campus every day,” said Justin Ellis, who shares hosting duties with Le Doux.

Ellis serves as associate producer for the show and works at the Georgia Tech Library. His time on the development committee for the science fiction collection connected him with Yaszek. She thought there was a strong role for the library to provide academic foundations for the show, so Ellis signed on.

“I think the fact that we try and tackle both the ‘pop’ side — literature and entertainment — and the real science, research side is one way to bridge the gap between the sciences and the liberal arts,” said Ellis. “Many of the topics discussed in Sci-Fi literature and media are extrapolated from, or have some root in, real science.”

At the start of two-minute madness during the cyborg hour, Ellis shares his enthusiasm for wearable computing. He muses that he would be game for a cybernetic implant in his arm.

Le Doux quickly counters that that could be problematic in a light saber battle.

It’s a discussion that underscores how Le Doux describes the show, as “a living laboratory for the intersection of liberal arts and science.” It’s a concept with which he identifies personally.

“My studies are evenly split between computer science and the liberal arts — communication, culture, design — so this kind of cross-pollination is something I'm into,” said Le Doux.

It’s also something that’s unique to Georgia Tech and its students. Sci Fi Lab is one way to expand that intersection beyond the campus and into the greater community.

“In the wider culture we tend to have a gap between the arts and the sciences, but both sides would gain a lot if they worked more closely together, and I like to think there is an increasing awareness of this,” said Le Doux. “I think what makes the Sci Fi Lab unique are the combined perspectives of the participants.”

During the cyborg hour, Ellis interviewed Georgia Tech faculty about their work. In a telling demonstration, Thad Starner, associate professor in the School of Interactive Computing, challenged Clint Zeagler, a research scientist in the College of Architecture, to a picture race. Starner tapped his Google Glasses and secured a photo nearly instantaneously. Zeagler was forced to wait for his phone to turn on before launching a photo app.

Then they talked about getting inspiration from fashion design and Terminator movies. The intersection of arts and science is unavoidable. Sci Fi Lab serves as the petri dish for deeper investigation. 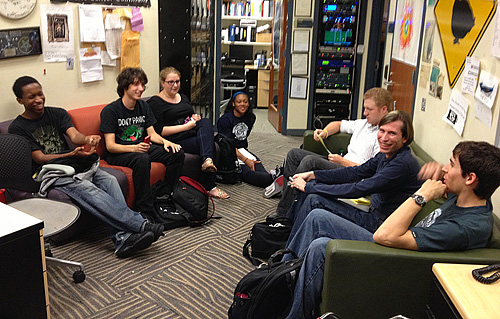